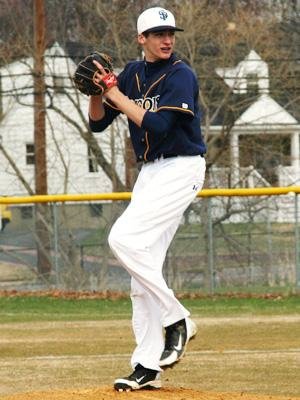 Severna Park has a tradition of turning out great baseball talent and this year is no different including two freshmen at the University of Maryland, Alex Ramsay and Kyle Convissar, and San Francisco Giants pitcher Josh Banks, a 2000 graduate. Under Coach Jim McCandless, the Falcons won state championships in 2003, 2005 and 2009.

“Our outlook is very promising for the 2011 season,” said McCandless, who has a keen eye for talent. “The team has more pitching depth and infield depth than we have had in several years. The hitting will progress as the season goes along and we look to continue the successful baseball tradition that has been established here.”

At the time of printing, the Falcons were 2-1. On Monday, March 28, cross-town rival Chesapeake High School came to Severna Park and handed the Falcons their first loss of the season (6-5). The Cougars played ‘small ball’ with only 3 hits, some clever base running, and a determination to win the close game.

For those with short memories, it was only last spring when these same Chesapeake Cougars made an unforgettable run through the Maryland State playoffs and established themselves as a formidable rival for the Falcons. Along the way they defeated Severna Park in the semifinal round when senior Shane Troyer smashed two home runs in the same inning to lift the Cougars to an emotional playoff victory.

With wins over Glen Bunie (9-8) and North County (25-2) under their belt, the Falcons know they are a young squad that will improve as the season goes on. Sophomore pitchers Reid Kowalski and Bradley Keith have already seen action on the mound and have performed with composure against older and more experienced competition. Sophomore third baseman James Carran and freshman second baseman Evan Mendoza are expected to make solid contributions as well.

“The 2011 team has a great mix of quality senior leadership to go along with a talented group of underclassmen,” added McCandless. “Our team captains are senior third baseman Brent Jones, senior centerfielder Connor Wells, and senior pitcher Clarke Lindsay.”

McCandless is a 1986 graduate of Severna Park High School who went on to play baseball at William and Mary, where he earned a scholarship after his sophomore year and was a four-year starter.

As for the future, the Severna Park Junior Varsity (JV) team is off to a 2-1 start as well. After an opening game, 10-0, shutout win over Glen Burnie, the JV Falcons lost, 12-5, to Chesapeake.

"We really didn't play well in any aspect of that game," confessed Coach Dave Ferris.

"It was a great win and hopefully it will get us going for a good year," said Ferris.

Coach Ferris and Coach Joe Mayer have been coaching the JV Falcons together for the past nine years.