Super Plungers, Students Ready To Start Freezin’ For A Reason 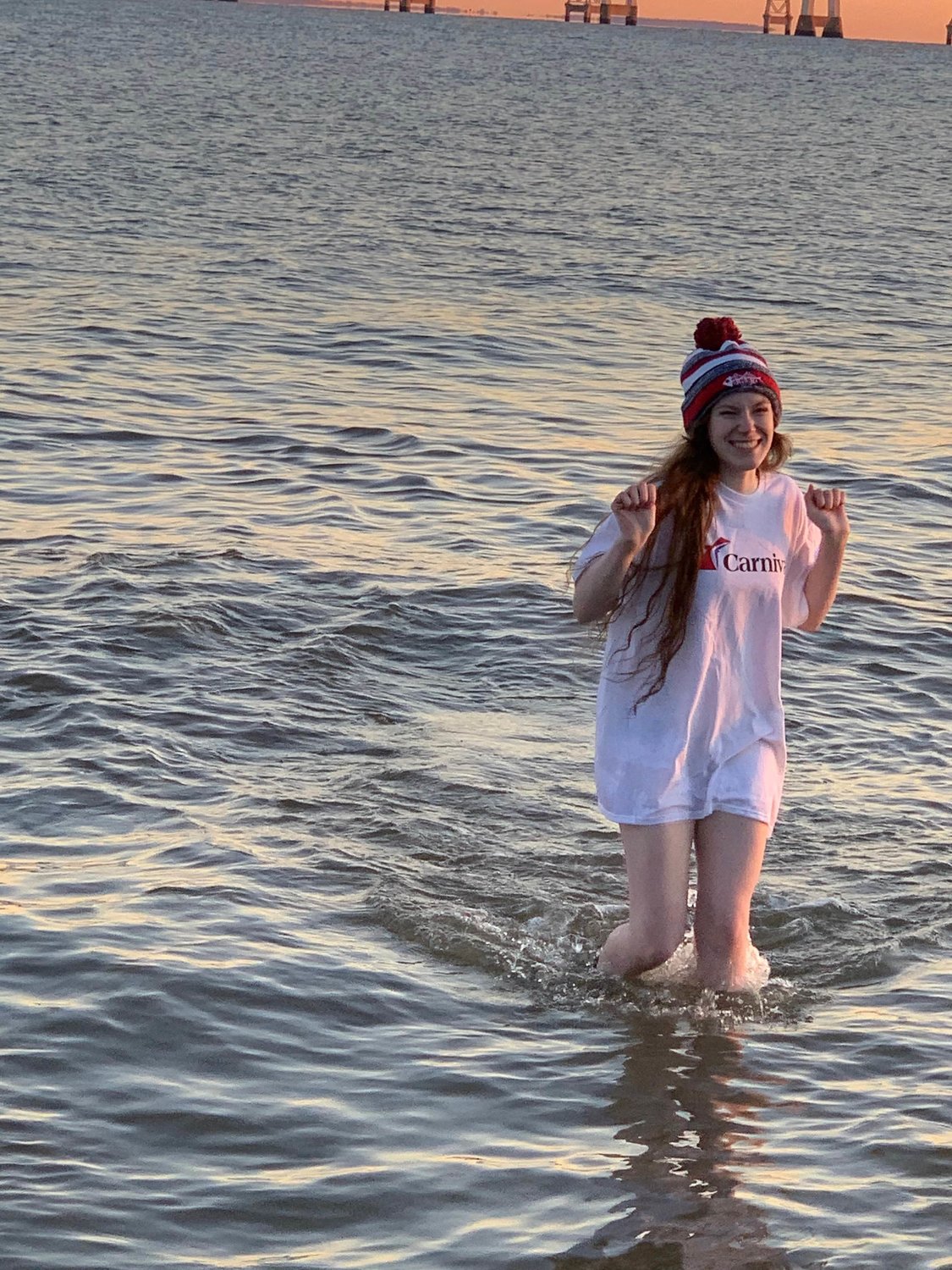 Inspired by her family and former Special Olympics athlete Jimmy Myrick Jr., McKenna Chadwick has raised nearly $30,000 for the Super Plunge.
Posted Thursday, January 12, 2023 10:56 am
Support A Plunger Or School

To help the St. John team and other participants from area schools, go to plungemd.com and select “Support a Plunger” followed by “Cool Schools.”

Bring an outfit for the themed plunge

Some organizations shave heads or hold karaoke nights. Others host palm-reading sessions at elementary schools. Fundraising can be an art form, and that is also true for the Polar Bear Plunge, in which people rush into the frigid Chesapeake Bay at Sandy Point State Park in Annapolis to raise funds for Special Olympics Maryland athletes.

If that sounds crazy then McKenna Chadwick’s effort might seem especially wild. The 19-year-old Shipley’s Choice resident and Anne Arundel Community College student is about to withstand the cold water 24 times in 24 hours from January 27-28 for the Super Plunge.

“I look forward to it all year every year,” said Chadwick, who is doing the Super Plunge for the third time. “The same people have been doing it for a long time. It’s definitely a big family thing.”

The Super Plunge is a family tradition that started with Chadwick’s dad and her two brothers when she was just 5 months old. She cherishes memories from each year: making posters for her family and teaching Special Olympics athlete Jimmy Myrick Jr. to hula-hoop.

“I looked up to Jimmy Myrick, and five years ago, he passed away from leukemia,” Chadwick said.

Myrick’s death sidelined the family from the Super Plunge for a few years, but Chadwick wrote a letter to her parents, urging them to let her participate. Since then, she has enjoyed two events, and neither was predictable.

“We wear water shoes to protect our feet … and I forgot mine, so I had to wear Adidas into the water,” she said. “The second year, big chunks of ice were in the water. I was all cut up and bleeding.”

Despite that last experience, she is eager to return to Sandy Point after missing a few years due to COVID. To raise the required $10,000 to be a Super Plunger, she has had to get creative in addition to sending emails and posting on social media.

“It is really difficult to raise $10,000,” she said. “In the past, I have stood outside of grocery stores and collected money, I’ve done raffles, and I paid one of our friends to wear a polar bear suit and stand outside in the cold.”

St. John the Evangelist eighth-grader Charlie Silk also had to get creative once he decided to get involved in the Cool Schools Plunge. He partnered with student council president Connor Merchant, giving Polar Bear Plunge presentations to all middle school classrooms.

Charlie previously did a few Polar Bear Plunges for fun.

“A while ago, I found out that the Special Olympics were a way for people with special needs to participate in competitive sports,” he said. “Then, I watched some of the coverage on TV with the plungers and the awesome stories of Special Olympians that benefitted from the day, and it inspired me. I really wanted to bring the idea up to the administration and teachers at St. John to see if we could be a part of it this year.”

Students were “immediately excited” about that prospect, according to team captain and St. John teacher Laura Poremski. As of mid-January, St. John was the top Cool Schools fundraiser with $18,380. The Crofton Cardinals were second with about $17,180.

“This event is just such a great way to show our students that you can have fun while helping others,” Poremski said. “It really has been amazing to see the generosity and support of the St. John the Evangelist families and friends.”

Chadwick has received plenty of support as well, collecting more than $27,000 over the years. To reach her goal for this year, she needs less than $3,000.

All of the effort is worthwhile once she sees the reaction from the athletes.

“It’s incredible to see how much support Special Olympics Maryland gets through such a unique event like the Polar Bear Plunge,” Special Olympics Maryland athlete Adam Hays said in a statement. “Especially now as so many teams include those with intellectual disabilities on them. Through this cold winter event, we are all bringing awareness to a unified generation as we lead the way and freeze together and experience inclusion.”

Support Chadwick by visiting support.somd.org/fundraiser/4302286. To help the St. John team and other participants from area schools, go to plungemd.com and select “Support a Plunger” followed by “Cool Schools.”

“Any help is greatly appreciated,” Chadwick said. “It means the world, not just to me but also to the Special Olympics athletes.”