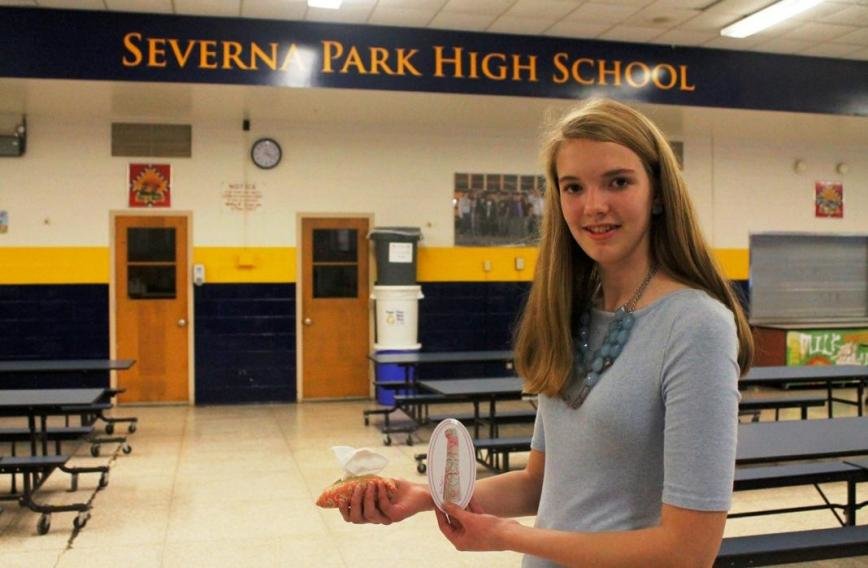 High school can be stressful. For most students, maintaining a successful academic career is enough, but for Severna Park High School freshman Erica Szymanski, that doesn’t seem to be the case.

With a full schedule of classes and seven after-school clubs, Erica balances the life of a high schooler with the life of a CEO, running two businesses by herself.

Erica’s business experience dates back to her middle school days. The entrepreneurial journey began when Erica, who had always enjoyed arts and crafts, received a paper beading kit from her grandmother for her 11th birthday. Upon visiting the SPCA of Anne Arundel County with her father, Erica realized she wanted to begin selling her jewelry to raise money for the SPCA.

“That was the foundation for when I started selling things,” Erica said, describing how her small stand on the corner of her street morphed into the business now known as River Beads, which sells handmade jewelry, tissue holders and can koozies.

After participating as a vendor in SPCA-sponsored events and winning an award for best marketing and presentation at a church business fair, Erica found that she would need to start selling her jewelry for profit — not for donations — to keep up with demand.

It was immediately after she received highest business potential award from the 2014 Children’s Business Fair at the Severna Park Community Center that Erica decided to move her product out of shows and into stores. Erica traveled to Twisted Sisters in downtown Annapolis with her handmade tissue holders — displayed just hours before at the business fair — to request that the shop carry her product. “That’s the hardest part, I think, how to actually get your product into stores,” Erica remarked. Although she had never approached a business with a request like this before, Erica’s products were accepted and added to the inventory shortly thereafter.

“Once I knew what to do, I just continued what had worked the first time until [my products were sold in] 10 locations,” she recalled.

Two stores have since closed or moved locations, but despite those losses, River Beads products are still sold in nine locations across Maryland, Delaware and Virginia.

Less than a year ago, Erica combined her passion for art with her already vast business experience to create Erica Morgan Designs, her second company, through which she distributes decal magnets printed with her on artwork, created on a mass scale thanks to a manufacturer. The products aren’t the only aspect that separates the two businesses. “Their missions are different. River Beads was focused on charity work and giving back [with handmade products],” Erica said. For Erica Morgan Designs, though, Erica explained, that the mission is about “getting recognized as an artist.”

Erica, a member of the Anne Arundel County Public Schools Gifted Visual Arts Enrichment Program for two years now, creates imaginative art based on real-life scenes. The first — and so far only — product for Erica Morgan Designs is a decal featuring the Bethany Beach totem pole, all designed and drawn by Erica. The simple yet elegant design is a hit with consumers and business owners, and it is currently sold in 13 different retail stores across the coast of Delaware.

The hope for Erica is to continue with both businesses while keeping up with schoolwork, participating in clubs and working to improve her artistic abilities, which include her design work, as well as writing and dance. “What makes me different from most people is I enjoy constantly being busy; I feel lazy when I’m sitting still,” Erica said about her seemingly endless schedule. “I always want to be achieving something.”

As for both River Beads and Erica Morgan Design, Erica plans to extend her progress into more stores and run the business as she has been. “All of my products, even the ones manufactured, I’m keeping in the USA,” she said. “That’s my goal. I like knowing where my products come from, so I’m going to keep that as my mission.”

How states compare by their commercial energy use

Colleges with the most Olympians since Tokyo 2020

How cashless spending has grown since 2015

10 states where inflation is hitting the hardest