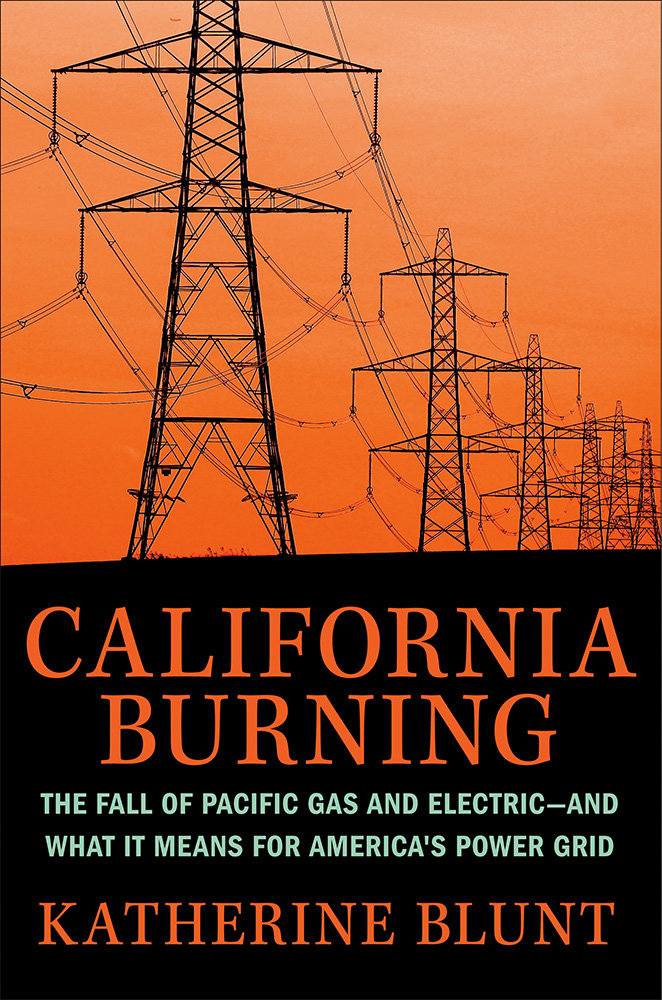 “California Burning: The Fall of Pacific Gas and Electric and What it Means for America’s Power Grid” is a book by Severna Park native Katherine Blunt.
Photo Provided
Previous Next
Posted Friday, November 4, 2022 11:48 am
By Lauren Meyer

Katherine Blunt has already made a name for herself in the journalism ranks, and she’s most recently caught the attention of the publishing world with her August release of the national best-selling book “California Burning: The Fall of Pacific Gas and Electric and What it Means for America’s Power Grid.”

The 2011 Severna Park High School graduate has covered power, renewable energy and utilities for the Wall Street Journal since 2018, and much of Blunt’s work has also focused on wildfires, droughts and other challenges facing utilities in the west.

Blunt, who grew up in Shipley’s Choice and now lives in San Francisco, joined the Wall Street Journal just before the 2018 Camp Fire, which ignited in a rural part of Northern California when a Pacific Gas & Electric power line failed. Eighty-four people died from the tragedy.

“I worked closely with two colleagues to investigate the root of that failure, and we produced a series of articles that was a finalist for the Pulitzer Prize [for National Reporting] in 2020,” Blunt said. “Because of that, I got a call from a literary agent asking if I'd write a book, and I agreed. It's a very complex story best told at length.”

For the 2018 Camp Fire series, Blunt and her colleagues also earned a Gerald Loeb Award, one of the highest honors in business journalism. The Wall Street Journal trio was also recognized with the 2019 Thomas L. Stokes Award for energy and environmental writing, as well as a silver Barlett & Steele award through the Donald W. Reynolds National Center for Business Journalism.

In her new book, Blunt examines how PG&E, a legacy company built by innovators and visionaries, endangered millions of Northern California residents through criminal neglect of its infrastructure. The book details how the company’s prioritization of profits and politics caused a rusted hook purchased for 56 cents in 1921 to split in two and ignite the deadliest wildfire in California history.

Beginning with PG&E’s public reckoning after the 2018 fire, Blunt chronicles the evolution of PG&E’s shareholder base, from innovators who built some of California’s first long-distance power lines to aggressive investors keen on reaping dividends.

“It's important that we collectively have a better understanding of the grid and the companies that deliver power as we become increasingly reliant on it,” Blunt said. “PG&E's story demonstrates the danger of mismanaging risk and underscores the importance of strong regulatory oversight.”

In her book, Blunt exposes the driving forces of the PG&E dilemma: deregulation and market-gaming led by Enron Corporation, a steadfast push for renewable energy, and an increase in wildfire risk throughout the west, while regulators and lawmakers pushed their own agendas.

While Blunt notes the importance of understanding how and why California’s largest utility company neglected its infrastructure with deadly consequences, she emphasizes that it’s not a story unique to California.

“It's a harbinger of what's to come as climate change exacerbates the vulnerability of the power grid and forces utility companies across the country to confront a new set of risks,” Blunt said.

Before her work at the Wall Street Journal and launch of “California Burning,” Blunt was a business reporter at the Houston Chronicle. She spent almost a year reporting on how Joel Osteen built Lakewood Church into one of the nation’s largest by deploying sophisticated marketing and branding tactics taken from the corporate playbook. The three-part series earned her second place in feature writing from the Texas Associated Press Managing Editors in 2018.

Rewinding a bit further, Blunt’s accolades kicked off during her time at the San Antonio Express-News, where she investigated why the first public-private toll road in Texas, and many other roads financed prior to the recession, went bankrupt several years into operation. In 2017, both Texas Associated Press Managing Editors and Editor & Publisher awarded the investigation first place in business journalism.

Blunt’s humble journalism beginnings, however, took place in the halls of Severna Park High School. The author credited Lea Trimble, who retired from the high school in 2016, for encouraging her to be a part of the school’s paper, The Talon.

“I've wanted to be a journalist since high school,” Blunt said. “I joined The Talon staff as a freshman, and it was the first time I found something that really suited my skill set.”

“California Burning: The Fall of Pacific Gas and Electric and What it Means for America’s Power Grid” is available for sale at booksellers such as Barnes & Noble and Amazon.