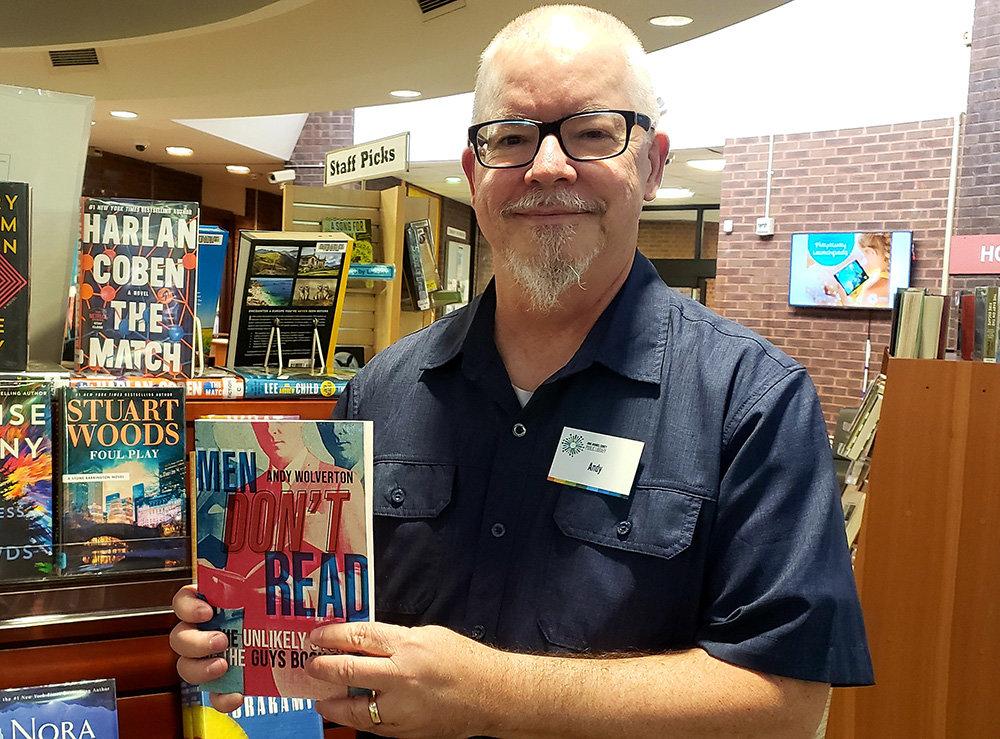 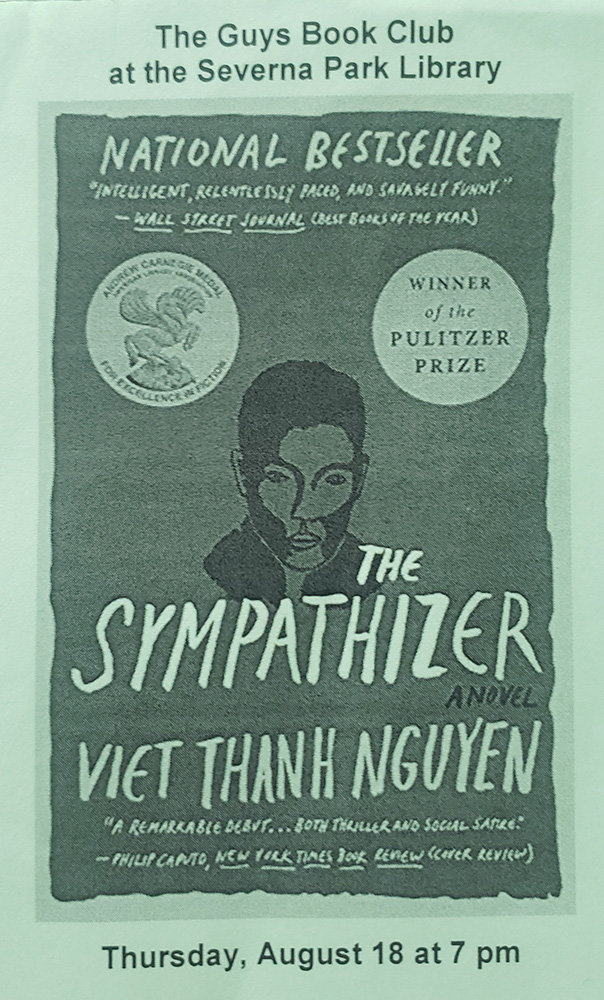 A flyer for the Guys Book Club at the Severna Park Library announces the next meeting.
Photos by Mark Patton
Previous Next
Posted Wednesday, August 10, 2022 12:06 pm
By Mark Patton

A Severna Park librarian is making waves with the Guys Book Club, and he’s penned a new read that he hopes will offer a blueprint for other libraries to follow.

Wolverton’s book not only shares stories of his own experiences with the Guys Book Club, but it also gives advice on how others can start something similar. He said he got the inspiration for the book after some of his regular attendees relocated and expressed interest in establishing a club at their next libraries.

“It’s not hard, and it doesn’t really cost much money, maybe not any,” Wolverton said about starting a book club. “Don’t be afraid to just go up to guys and say, ‘We’d love to have you. Let’s talk about books.’”

Steve Collier showed up to his first meeting with the Guys Book Club six years ago when the group discussed the southern gothic tale “Midnight in the Garden of Good and Evil.” Collier said a lot of men genuinely enjoy reading, discussing their ideas on a book and reflecting on thoughts shared by other members.

“The trick, of course, is to actually seed a guys book club and then nurture it for the months or even years it takes to reach and sustain ignition temperature,” Collier said. “It truly takes a special person to have that sort of vision in the first place and enough grit and patience to follow through month after month after month, learning and adapting as you go. Happily for the members of the Severna Park Guys Book Club, Andy is exactly that sort of person.”

Patience was definitely required of Wolverton, as time after time he would hear the same refrain: men don’t read. He knew that wasn’t true.

“I wanted to put a book club together just to show people that guys do read, and they should have a place where they can talk about what they read without judgment, where all opinions are valid, and at first it was a tough sell,” Wolverton said.

He recalled how the first meeting of the Guys Book Club in October 2011 was almost the last as just three other attendees showed up to discuss Laura Hillenbrand’s “Unbroken: A World War II Story of Survival, Resilience and Redemption.”

Since that meeting, the Guys Book Club has exceeded expectations as longtime members sit beside newcomers month after month to discuss the club’s latest pick, which is chosen alternately by Wolverton and members. The 14-year Severna Park Library veteran hopes to expand the group further as Wolverton noted he still receives emails from folks outside of Maryland who heard about his club or participated virtually during the pandemic.

“The library system is considering buying some software that makes it a lot easier to do a hybrid of virtual and in person … so we’re thinking about doing that, and that would open it up to anybody in the world,” Wolverton said.

Wolverton said other libraries in the Anne Arundel County system have expressed interest in starting their own book club for teenage guys and men.

“My fundamental concern is we as a nation aren’t reading like we were even 10 years ago,” Wolverton said. “I just want you to read, and I just feel like we would be a richer country in so many ways.”

According to Deloitte Global, a 2018 study of children at age 15 found that more than 40% of girls reported reading at least 30 minutes a day, compared to only about 25% of boys. Wolverton said that teachers aren’t to blame, but a lot of reading lists that are required in school include titles that don’t always spark the interest of males.

“That message for the guys is reading is not for you,” said Wolverton, adding that he calls his book club “guys” instead of “men” because he wants teenagers to attend as well.

Lessa Kanani’opua Pelayo-Lozada, president of the Chicago-based American Library Association, said book clubs around common interests and identities allow patrons to have deep and difficult discussions in a place where they can feel seen and heard, even around controversial subjects.

“Libraries develop programs and services to meet needs they see or hear from their patrons,” Pelayo-Lozada said. “A men’s book club is one example of the many ways that libraries engage and empower reading and literacy for all.”

Wolverton’s book is available at the Severna Park Library and leading online retailers. Other libraries — such as the Arlington, Texas, system — have the book on order already.

The Guys Book Club meets the third Thursday of the month from 7:00pm-8:00pm at the Severna Park Library. The next meeting is slated for August 18, when members will discuss the 2016 winner of the Pulitzer Prize for fiction, “The Sympathizer” by Viet Thanh Nguyen.