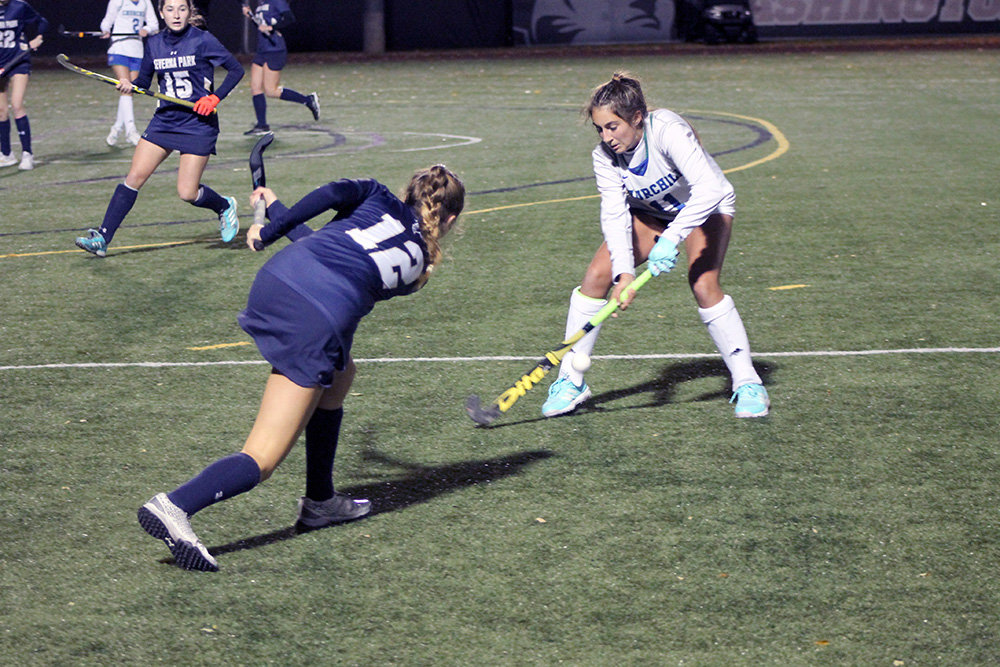 Delanie Abere passed the ball toward the circle in the state final against Winston Churchill on November 13. 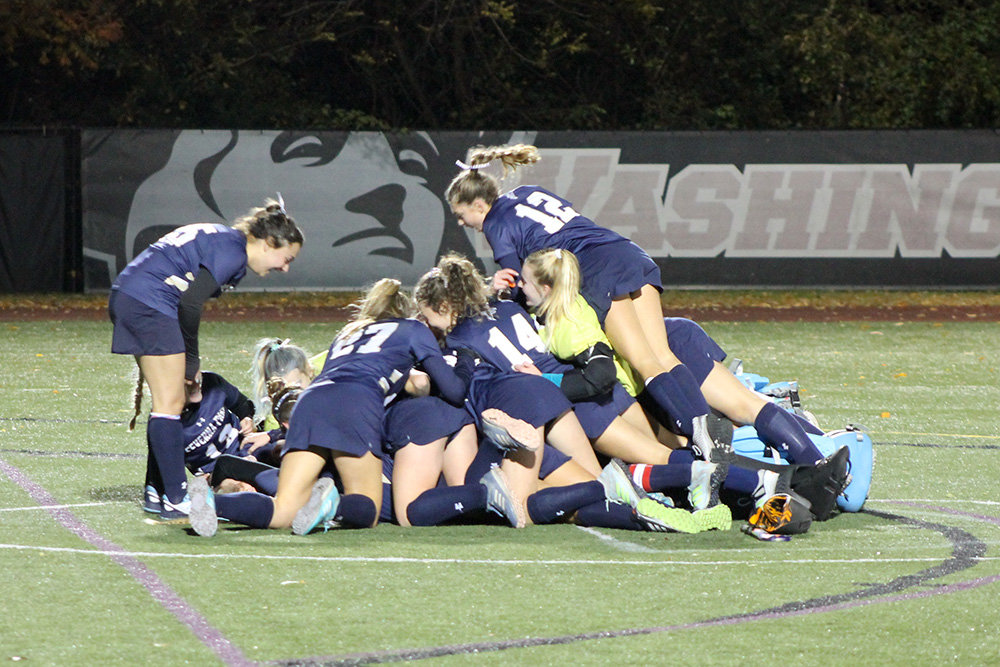 Severna Park field hockey climbed to the top of a familiar peak, winning their record-extending 25th state title in a 2-0 win over the Winston Churchill Bulldogs on November 13. This is their second title under head coach Shannon Garden, with the Falcons winning in 2019. The next closest school in terms of state titles is Pocomoke, which won its 20th this season.

Cold weather and a sizable crowd at Washington College didn’t faze the Falcons, who took control of the game early and never gave it up. The Falcons’ grasp on the game first took hold on their second corner attempt when senior Bekah Mayron received a corner insert pass at the top of the circle. Mayron then passed it back to the inserter, fellow senior Delanie Abere, for the opening goal less than six minutes into the game.

Playing with the lead, the Falcons defense became a wall that Churchill was rarely able to get past. The Bulldogs could not capitalize off the handful of corner attempts that they got and only challenged Falcons goalkeeper Charlotte Kramer once as she had to make just one save the entire game.

The second half was eerily like the first as the Falcons added to their lead less than five minutes into the third quarter off a corner attempt. Ava Drexler-Amey received the insert pass and took a straight shot into the lower left corner of the goal.

“The second goal really gave us more confidence; it really gave us a boost,” Drexler-Amey said. “Knowing we had the lead, all we had to do was keep finishing to the end.”

With the win seemingly in hand and the defense never giving the Bulldogs any good chances to get a shot off, coach Garden subbed out Kramer late in the game to give senior goalkeeper Sarah Krause a curtain-call in her final high school game.

“This team, for this year, I think we had the best defense that I’ve ever had,” Garden stated. “Our defense definitely got us to this point, and I’m sure won us this game. It’s a stellar backfield and a stellar goalkeeper.”

The Falcons’ defense was so good all season long that, aside from one game, they never gave up more than one goal in a game. And Garden said that unlike in past seasons, they didn’t have a consistent go-to goal scorer that the team could rely upon and build their offensive game plan around. Instead, as was apparent versus the Bulldogs, the Falcons utilized their defense to stop the opponent and quickly counterattack, which often led to opportunities at the offensive end of the field. Several corner attempts came about because the Falcons were able to quickly move the ball down the field, as defenders like Zoe Day turned defense into offense.

For Garden, it meant a lot to see her team win a championship after not having a season last year.

“I had some girls who were on JV last year and they really wanted a chance to come and play in a state championship,” Garden said. “They’ve seen, so many times, the history and tradition of winning and winning and winning, and they wanted their turn and they worked really hard to get here. So, I’m really happy that they have been able to experience this.”