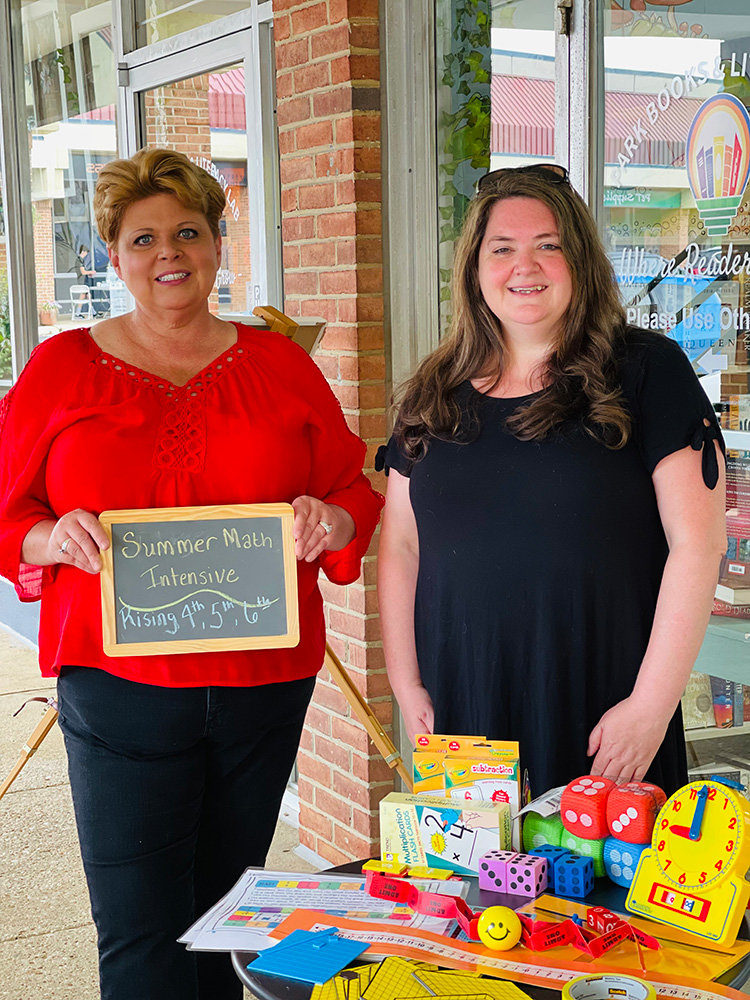 “We know there will be gaps this fall due in part to last year’s curriculum and the condensed way in which it was taught,” said Amstutz, alluding to virtual learning for the 2020-2021 school year. “Research is pretty clear; we need to be talking about acceleration rather than learning loss. We need to move forward. [AACPS] has a plan, and those gaps will be addressed.”

Throughout their education careers, Amstutz and Mouring have seen a negative change in students’ attitudes toward math starting around fourth and fifth grades, and the trend only gets worse in middle school.

“It should not be acceptable to say, ‘I don’t do math, or I’m not good at math,’” Mouring said. “You don’t hear that about English! And we shouldn’t hear it about math.”

For the last two years, these friends and colleagues have comprehensively pondered the root cause of math aversion in young students and how to address it. As educators, they have repeatedly seen students struggle in the classroom after summer break if they had not practiced math facts at home. To help students heighten their math skills, enthusiastically prepare for a full return to in-person learning in the fall, and instill a lifelong love and curiosity of mathematics, Amstutz and Mourning have launched a summer math intensive program, through A to Z Education Consulting, founded by Amstutz.

In collaboration with Park Books and Literacy Lab in Severna Park, this dynamic math duo will help rising fourth-, fifth- and sixth-graders in two facets: math fluency and core content.

Math fluency sessions provide children with the tools and skills to become fully fluent in their basic math facts. With no more than eight students per small group, children will sharpen their math skills so that when September rolls around, they are confident and eager to learn, building upon this positive learning experience.

“It is critical that students are fully fluent in multiplication facts by the end of third grade to be successful with all math content,” Mouring said.

“Math learning no longer relies on memorizing algorithms. Students are now required to explain the how and why algorithms work,” Amstutz said. “Once children understand the ‘why’ beneath core math content, they get excited to build upon those concepts.”

For more information on the Summer Math Intensive, A to Z Education Consulting, or Amstutz and Mouring, visit www.atozeducationconsulting.org. To learn about Park Books and other summer programs, visit www.parkbooksliteracylab.com.

Rachel Amstutz has more than 20 years of experience in education. Early in her career, she served as the math department chair at Severna Park Middle School. She has been board certified in early adolescence mathematics since 2004. She currently serves as a school principal in the AACPS system. She launched A to Z Education Consulting to expand her contributions to children, families, schools, school leaders and education broadly.

Mary Mouring also has been teaching and developing learners for more than 20 years. Her specialty is upper-elementary-aged students with a focus on sparking a love for math even among the most apprehensive learners. Mouring began her career with the Los Angeles Unified School District, working in some of the nation’s most challenging and diverse education environments. She was recognized for her work as Outstanding Teacher of the Year for Los Angeles County and was a finalist for the prestigious Presidential Award for Excellence in Mathematics and Science Teaching. She contributed to the successful opening of two charter middle schools in Los Angeles, started three elementary or middle school Mathematics, Engineering, Science and Achievement (MESA) clubs, participated as a fellow in the University of Southern California Research Experience for Teachers, has been recognized by the National Science Foundation for bringing STEM opportunities to elementary students, and served as a fellow in University of California, Los Angeles’ math collaborative.