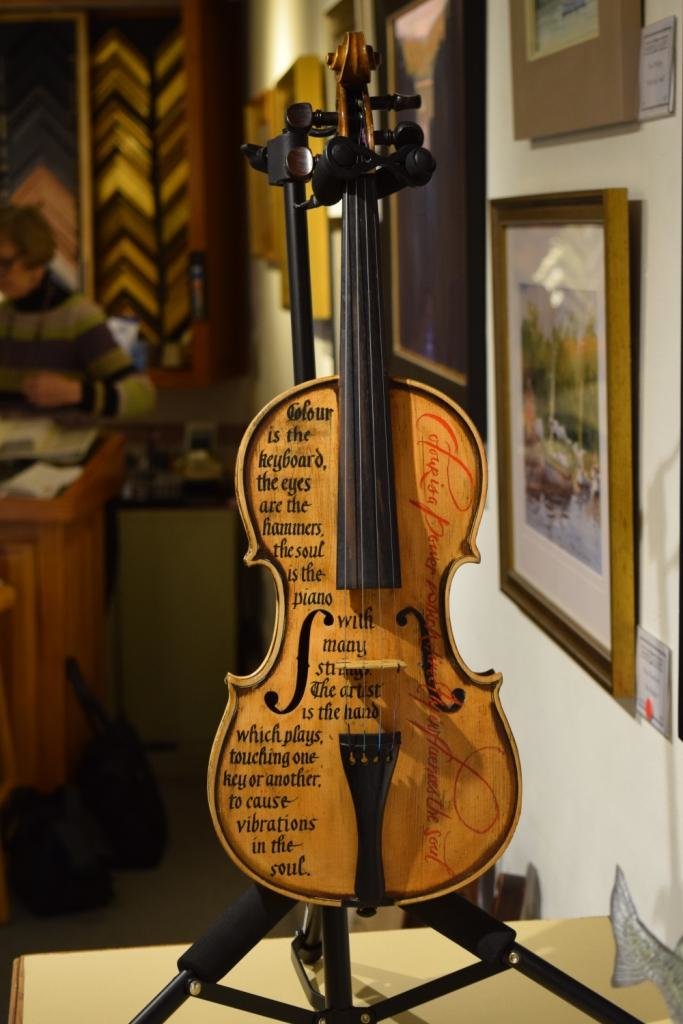 The Annapolis Dragon Boat Club is composed of both cancer survivors and supporters. 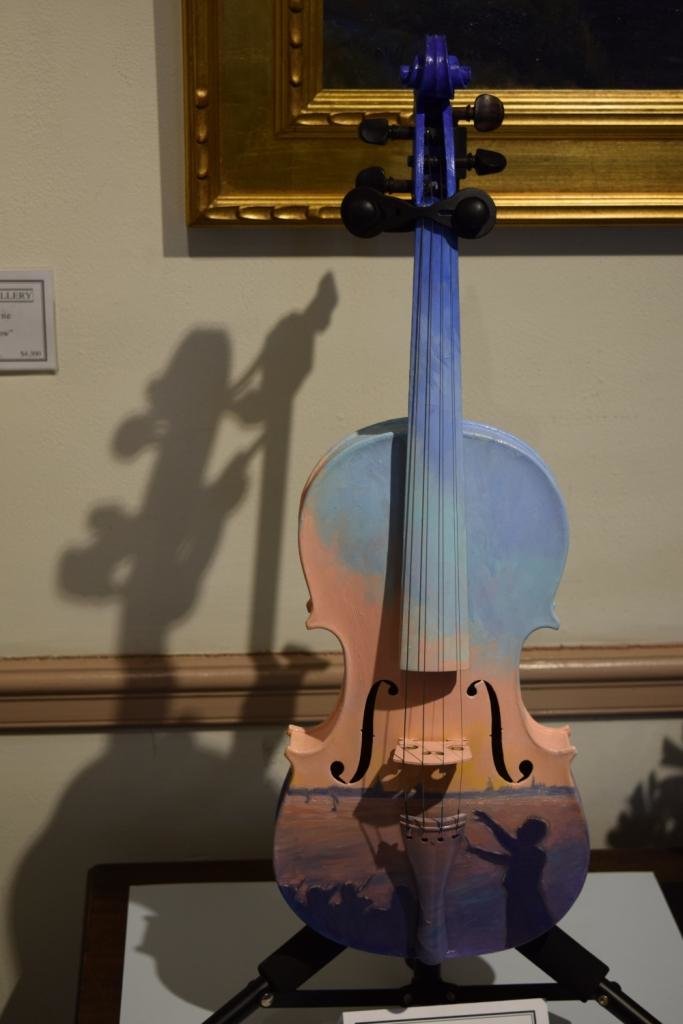 Melissa Gryder, an Arnold resident, painted the view of the sunset from Jonas Green Park on her violin.
Photo by Maya Pottiger 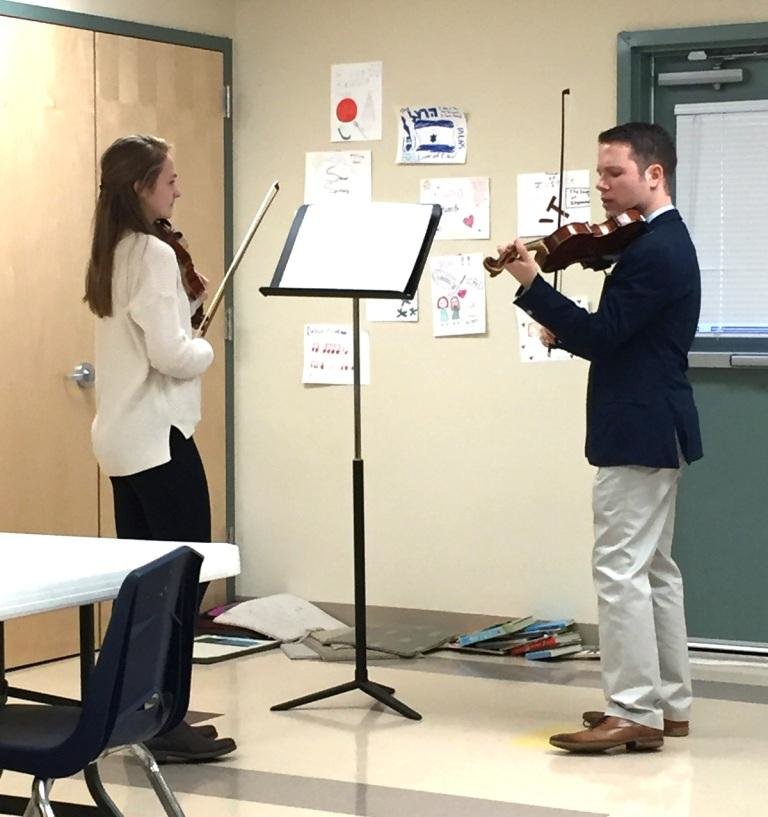 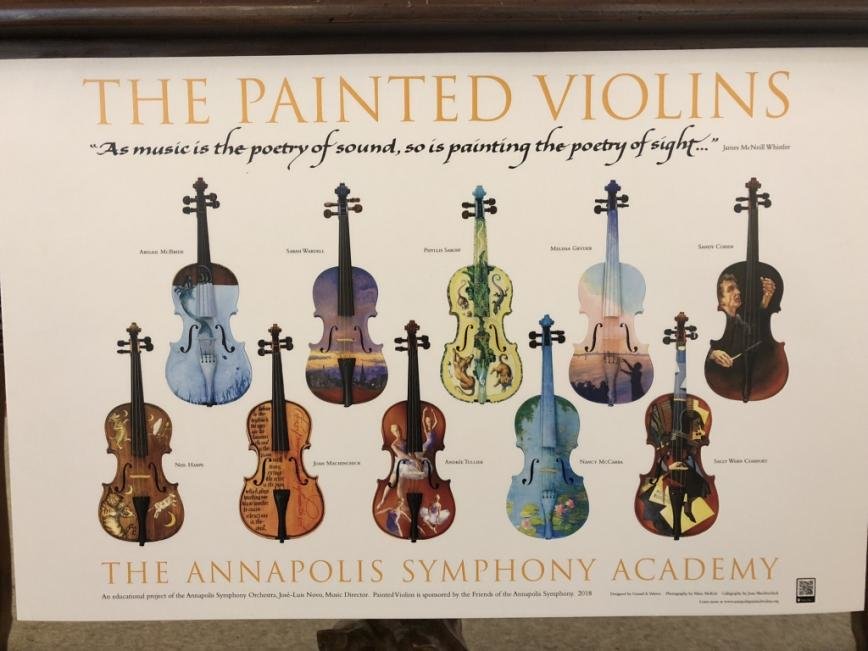 The painted violins will be on display throughout Anne Arundel County through December to be raffled on, and all proceeds go to the Annapolis Symphony Academy.
Photo by Maya Pottiger 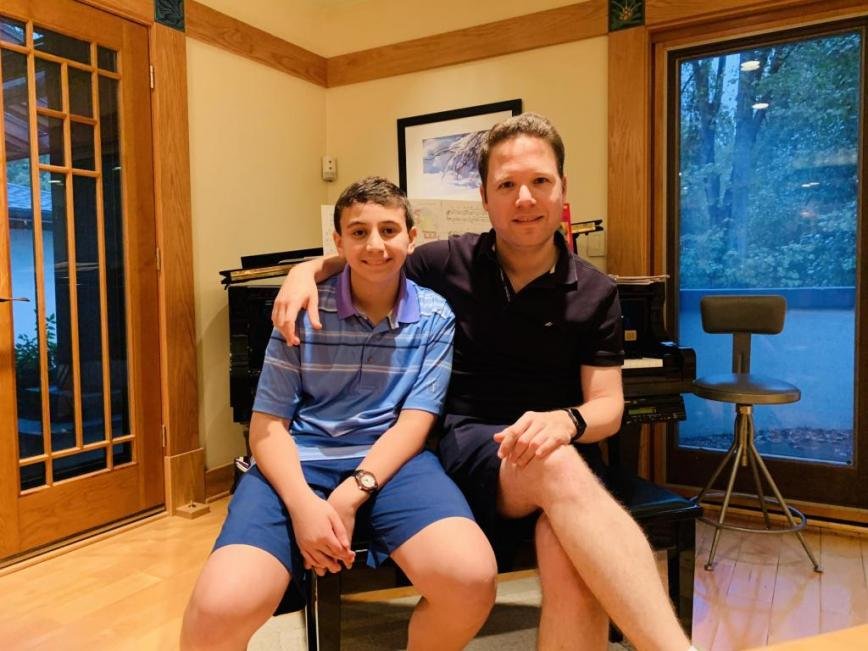 “We want to support and watch the academy bring that joy to so many children who may not have been exposed to it at all,” said Diane Green, a FASO volunteer who worked on the project.

Of the 10 artists chosen, two are Arnold residents.

Joan Machinchick, who has a background in graphic design, calligraphy and book illustrations, said she instantly knew what she was going to paint on her violin.

Using calligraphy, Machinchick wrote on the violin excerpts from Wassily Kandinsky's "Concerning the Spiritual in Art" discussing the relationship between "the sound of colors in a piece of artwork with the sounds made by the different musical instruments,” Machinchick said.

“It sounded like a wonderful challenge, and it was making a valuable contribution,” Machinchick said. “I felt that was a very good cause, and it was worth my time and effort. I’m honored to have been asked to participate in this project.”

Melissa Gryder, who credits her career in art to her high school band director, went to Jonas Green Park and painted the view of the sunset behind the Annapolis skyline. Gryder had to rig her violin to her easel by hanging it with picture-framing string.

“It’s very important to me to have arts in the schools and to have arts available to children,” Gryder said. “To help someone get some help from professional musicians was a great opportunity for me.”

The Annapolis Symphony Academy, now in its first semester, is an immersive strings program for students in grades six through 12 who have demonstrated accelerated musical abilities. The academy’s goal is to prepare students for careers in music.

Academy director and founder Netanel Draiblate, who is also the concertmaster for the ASO, first had the idea for the academy three years ago. He thought it was “halfway criminal” that Annapolis didn’t have a “full-blown music program.”

“It’s the capital of the state,” Draiblate said. “We should be leading, not following.”

The academy accepted 22 students for the first semester. All 22 students have private lessons and workshops, but only 18 are in the ensemble training program. Every year, 10 to 15 students will be added to the program so growth is slow and controlled, Draiblate said.

The academy also aims to engage with demographics that aren’t widely represented in orchestras. A study by the League of American Orchestras found that under 4 percent of all orchestra divisions in the country are minorities — in this case, specifically referring to African-Americans and Latinos.

With the academy, Draiblate aims for the balance to be 50 percent minority students and 50 percent of students who are already represented in the orchestra.

“We looked at the word ‘diversity,’ and one of the things we found is people take the word ‘diversity’ and make it such that we’re going to make a program only for minorities because we have to improve diversity,” Draiblate said. “While that’s very helpful, it does not serve the purpose of integrating. If you really want to be diverse, you have to teach people how to live together rather than step in their comfort zone.”

In addition to creating a more diverse orchestra, Draiblate wants to extend this program to students who have the musical talents but lack the financial resources for similar programs. He created the Waiver Program, which allows some of the students to be in the program free of charge while those students who can afford it pay the fee, which is still “$400 to 500 less” than similar programs in Baltimore and Annapolis, Draiblate said.

“We take those kids and we make sure that they get what every other kid gets without the financial burden being put on their parents so they have an equal shot like every other kid who does pay,” Draiblate said.

The painted violins will be on tour throughout Anne Arundel County through December. They start with two weeks at the McBride Gallery in Annapolis. Then, on October 5-6, the violins will be at Maryland Hall for the Creative Arts for ASO’s opening weekend.

“The more people that see the violins, the more people who will ask about the academy, and the opportunities for children to study music with professional musicians and to get excited about classical music,” Green said.

Elijah Simon, a member of Temple Beth Sholom in Arnold, decided to donate his bar mitzvah money to the Annapolis Symphony Academy. Simon learned about the academy from his mom, who met Draiblate when she purchased season tickets to the orchestra.

“I wanted a charity I could relate with that I really appreciated,” Elijah said.

A musician himself, Elijah plays piano and saxophone. Because playing an instrument is so fun for him, Elijah said he knew it could bring joy to others if they had the opportunity.

“It’s important because there’s so many people who aren’t in a good financial situation who can’t afford instruments like this, but they could become really good, and it would make them so happy,” Elijah said. “It’s so important to give everybody the chance to have an instrument.”

Draiblate met with Elijah on a few occasions and said this is “a very noble thing for a 13-year-old to do.”

“You see a kid like that who was obviously raised with a set of values and recognizes what a program like this can do and wants to help,” Draiblate said. “He’s very selfless. He’s giving away one of the gifts he’s getting for a milestone in his life, and the community is rallying behind him, too.”