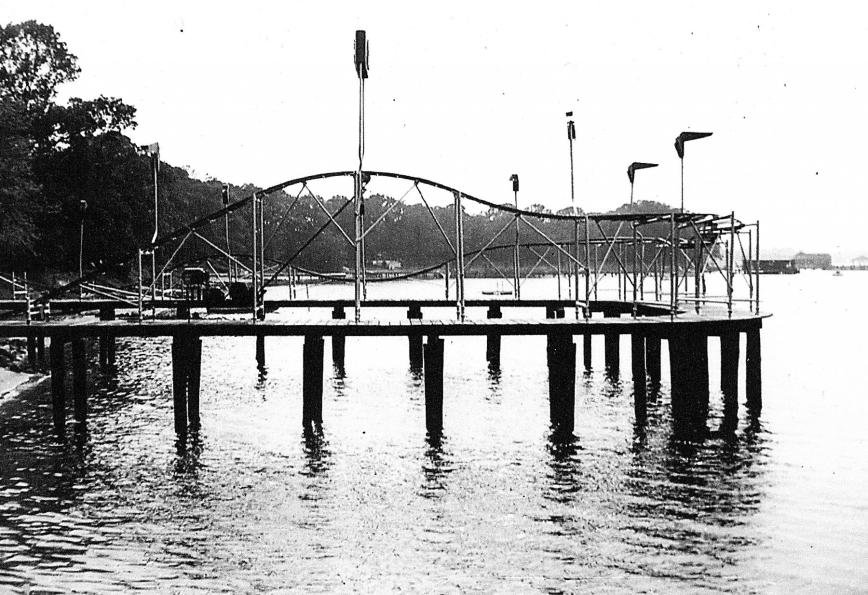 A wooden roller coaster once dipped and dove over the waters of the Magothy at Mago Vista Beach, a tourist attraction that also featured an alligator pond, an ornate ballroom and dance pavilions.
Photo courtesy of Robert Benson and Alberta Stornetta
Posted Wednesday, August 7, 2013 10:24 am
Peter Crispino

Today, the tranquil tract of land known as Mago Vista Beach houses a forest of upscale townhomes that sit within the confines of a gated community known as The Moorings. But in its past life, during its bygone heyday, the quiet community nestled along the Magothy was a lively tourist destination where visitors from miles around would come to gawk at live alligators, ride the rickety roller coaster over the river and dance the night away in jitterbug contests in the grand ballroom.

The private recreational area known as Mago Vista Beach opened in 1928 and grew into one of the area’s premier – and, later, most controversial – attractions over nearly four decades. Robert Crisp Benson, who built and resided in homes throughout the area in the early 1900s, and his son Harold opened two bathhouses and a dance pavilion along the shoreline and began hosting picnics, dance contests and other festivities on the grounds, according to Marianne Taylor’s “My River Speaks: The History and the Lore of the Magothy River.”

As time went on, the beach grew into a particularly popular venue for families and church groups, who used the facilities because of the strict no-alcohol-or-gambling policies that governed the grounds throughout its existence.

When the original facilities were destroyed by an electrical fire caused by high waters during the historic hurricane of 1933, the Benson family rebuilt. Rather than protect themselves from the same waters that had just destroyed their property, the Bensons embraced them: The new dance pavilion, named Marine Pier, jutted out over the Magothy. High dives, boat and canoe rentals and a water slide attracted visitors who came to enjoy some of the cleanest swimming waters in the area. Later, they built a jetty and trucked in sand to create a beach and swimming area large enough to accommodate the growing crowds.

As the popularity of Mago Vista grew, so too did its amusements. For children, the Bensons added a carousel, a miniature train ride called “Toonerville Trolley” and, most remarkably, a wooden roller coaster that dipped, climbed and dove out over the Magothy. For adults, four eight-room cottages were built to house overnight visitors from Baltimore. Additional picnic areas and halls were added, including a large ballroom with a sparkling glass dome. The Bensons also reached an agreement with the Baltimore Zoo wherein the family would purchase alligators to display within a fenced-in pond on the premises. When the gators grew 7 or 8 feet long, the family traded them back to the zoo for smaller ones.

As Mago Vista Beach’s popularity grew, so too did the controversy surrounding it. Despite being open to the public, African-Americans were barred from the establishment, and signs on the gates surrounding the facility read “Gentiles Only.” Protests took place outside the gates and mounting pressure compelled the family to eventually change the name to Mago Vista Beach Club.

The Bensons began selling parcels of the property in 1964, perhaps because the family’s patriarch no longer wanted to exhaust himself managing the grounds; perhaps because the Chesapeake Bay Bridge, which opened in 1952, had unveiled the attractions of the Eastern Shore to many of Mago Vista’s visitors; or perhaps because, like the Saturday night jitterbug contests staged in its ballroom and the “Gentiles Only” signs that hung on its gates, the once-popular destination simply belonged to an era that no longer existed.

By 1968, Mago Vista Beach Club was entirely owned by Capri Estates, which soon closed the facility, demolished or sold the amusements, and began building new homes there in 1973.

To read more about the history of Mago Vista Beach, read Marianne Taylor’s “My River Speaks: The History and the Lore of the Magothy River” and Alberta Stornetta’s “Arnold Maryland And Neighbors On The Broadneck.”