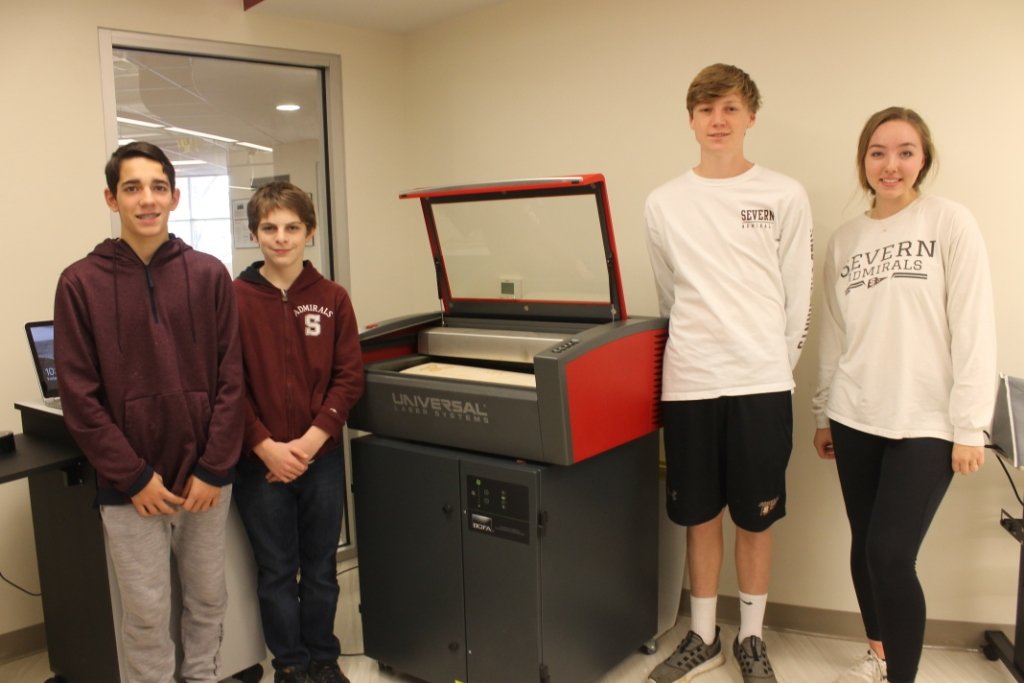 Ryan Money, Aaron Tiller, Jackson Gunhus and Ashley Reiter are some of the Severn School students creating and funding their own products and services.
Photo by Zach Sparks
Posted Wednesday, December 12, 2018 1:28 pm

With the holiday season underway, most kids are scrawling a list of gift ideas for their immediate family members, but a group of Severn School students is thinking broader, working with Junior Achievement to create products and services that will serve an entire community.

Junior Achievement works with youth to give them knowledge and skills geared toward work readiness, entrepreneurship and financial literacy. As part of Junior Achievement’s Company Program, 12 Severn School students have been working on projects since mid-October.

“A typical class is in school or after school, and 19 to 20 students will create a business on their own,” said Nick Anderson, director of entrepreneurial experiences for Junior Achievement. “The students here are a little more ambitious, so they broke into smaller groups.

“It’s a natural fit,” Anderson said of the partnership with Severn School. “With their educational pursuits, they are ahead of the curve and they have a full-time staff member dedicated to entrepreneurism.”

That staff member is Kelly Wilson, Severn’s director of innovative and entrepreneurial programs. Throughout the school year, she has helped students with everything from brainstorming business plans to finding start-up capital.

“I didn’t restrict them to practical things they could do,” Kelly said. “It was more about passion … and they’ll still have that practical application of the business process.”

Seniors Jackson Gunhus and Ashley Reiter are part of a team that is developing a cellphone case with customizable wood inserts.

Freshmen Ryan Money and Aaron Tiller are working on a different product: decorative art made with customer-supplied graphics. To create the item, the partners are using Severn School’s laser system.

“We can have our customers send us a picture of whatever they want and we will send it back to them,” Ryan said.

Two other groups are part of the Junior Achievement Company Program at Severn School. A group of juniors is offering yard maintenance and handyman services, and two girls are marketing their musical abilities to restaurants.

Anderson said that by having some groups market products and others choose services, the Severn School teens had the unique opportunity to see different approaches.

“Services require a lot more footwork at the beginning,” Anderson said. “The other groups will have to figure out how to produce their products and get them out on shelves, so they will have a lot of work later on. It’s nice to see both.”

Before they could succeed, students had to learn about the rigors of failure.

Gunhus and Reiter started with a music app that would allow students to see what songs their peers were listening to.

“None of us knew anything about programming, and it was costly to get it in the app store, so it wasn’t practical,” Gunhus said.

Reiter said, “There’s a difference between what you want to be able to create and what you can create, so it’s interesting to test those limitations.”

Ryan and Aaron went through a similar trial.

“Competition is a big thing when you start a business,” Aaron said. “We thought about selling T-shirts but then we thought about how many companies sell T-shirts. No one else is making decorations with laser printers.”

The Severn groups are aiming to finish their projects by spring break in March so they can enter the April 11 regional competition, which is now in its second year. Last year, about 45 students from five student companies were in the regional competition. Anderson said Junior Achievement wants participation to expand.

Many students think about starting a business but don’t know how. New research from Junior Achievement and Ernst & Young LLP showed that 41 percent of teens would consider entrepreneurship as a career option, yet only 6 percent of teen boys have started a business and only 4 percent of teen girls have done the same. The study was conducted by Wakefield Research between October 15 and October 22.

Count this group of Severn School students among the few who are exploring their business potential.

“I’ve always thought about starting a company like this, but I never took that next step with production,” Gunhus said.

Kelly hopes the project inspires other kids at Severn School. “Hopefully they are trailblazers and their effort causes a groundswell,” she said.

Anderson emphasized the real-word experience they are gaining from the Company Program.

“We can tell them it’s a real business with real bank accounts, but until they actually see it, it doesn’t click that, ‘Oh, we’re actually doing this,’” Anderson said.