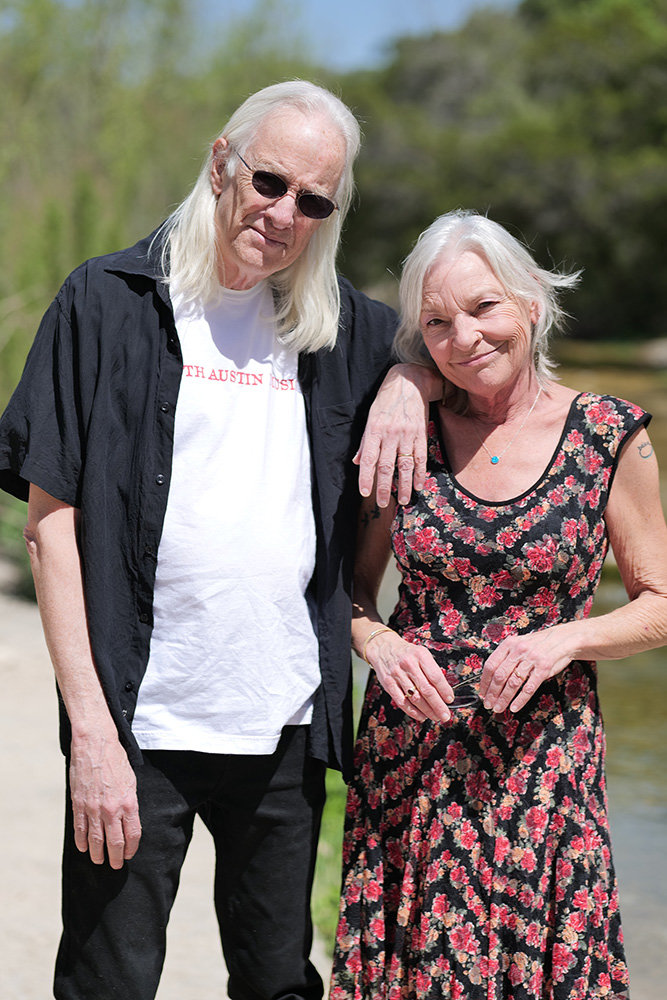 Jim Patton met Sherry Brokus at a bar in Arnold, Maryland, when she asked if she could sing a song with his band. Patton agreed she could sing Neil Young's "Cowgirl in the Sand" with them. She and Patton have performed together ever since.
Photo courtesy of Winker Withaneye Photography
Posted Tuesday, November 1, 2022 2:40 pm

Severna Park natives Jim Patton and Sherry Brokus, now a folk-rock duo residing in Austin, Texas, will celebrate the release of their "Going the Distance" album at 49 West in Annapolis on November 25 at 8:00pm. Luke Chohany will join them on guitar and mandolin.

"Going the Distance" has reached No. 17 on the folk-DJ charts, charted for 18 weeks — and still going — on the Americana charts, and is on the first round Grammy ballot for Best Folk Album. The title cut reached No. 1 on the Roots Music Reports folk chart.

Patton's new songs, while not directly addressing the pandemic, explore relevant themes of loneliness and dreams gone bad, and plans gone wrong, and how hard it is for two people to get along even when they love each other and have each other's best interest at heart.

Patton met Brokus at a bar in Arnold, Maryland, when she approached him on a break and asked if she could sing a song with his band. Despite strict rules against strangers sitting in, Patton agreed Brokus could sing Neil Young's “Cowgirl in the Sand” with them. She and Patton have performed together ever since. They listened to a lot of Richard and Linda Thompson, The Byrds, the Everly Brothers, and Emmylou Harris singing with Bob Dylan when they started, but from the beginning, they developed their own style.

As for his lyrical inspiration, Patton cites 20th century American fiction (F. Scott Fitzgerald, Ernest Hemingway, William Faulkner, Jack Kerouac, J.D. Salinger and Raymond Chandler) and the various lives of his childhood friends. “I knew doctors and lawyers and waitresses and teachers and water rats and gravediggers and the guy who drove the truck that emptied the port-o-pots all over the state,” he said.

Patton advanced his acoustic guitar skills by playing Bob Dylan songs, and he played electric guitar in a band performing Rolling Stones songs, and "that was pretty much it for covers.”

About Jim Patton and Sherry Brokus in Maryland

Sherry Brokus is a graduate of Archbishop Spalding who helped start the first folk masses at St. John Church in Severna Park when she was in junior high school. In addition to her work as a singer, she was previously the HIV/AIDS coordinator for the Anne Arundel County Health Department and the director of Annapolis youth services who pioneered the first Baltimore City HIV/AIDS street outreach program, and she developed the adolescent parenting program used by People Against Child Abuse. She taught courses for Anne Arundel Community College and the State of Maryland, and she was named Annapolis’ Young Businesswoman of the Year in 1986. She was also in private practice as a psychological therapist, a practice she continues in conjunction with her music today.

Jim Patton is a graduate of Severna Park High School and was the longtime head track and cross country coach at Severna Park, where his girls cross country team won the Maryland state 4A championships in 1987, and where he is a member of the Severna Park Athletic Hall of Fame. Patton was a multiple winner of The Capital newspaper’s Coach of the Year award. In addition, in 1986, Patton was named Baltimore Metropolitan Coach of the Year by the Baltimore Sun. Patton was also a cofounder of Baltimore’s acclaimed Roots Café music series. He also coached Annapolis songwriter and performer Dan Haas.

Toby’s To Present “Something Rotten”

Hippodrome To Show “Jagged Little Pill” And “My Fair Lady”