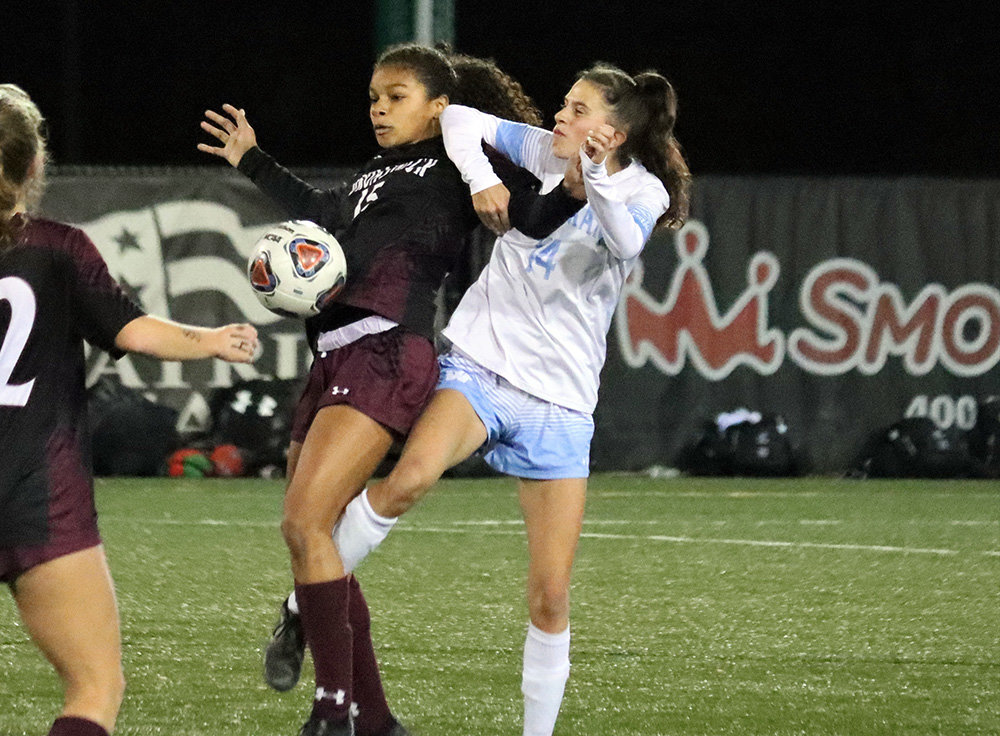 The Bruins made it to the state finals last season, finishing as runners-up with a 2-1 loss to Walt Whitman. This year, they plan to capture a state title.
Photo courtesy of Dennis McGinley

Severna Park made it to the regional finals last season and players hope to advance further this season.
Photo courtesy of Christopher Fincham Photography
Previous Next
Posted Monday, September 5, 2022 12:00 am
By Conor Doherty

The 2021-2022 season was a rollercoaster for each of the local high school girls soccer teams. Some suffered heartbreaking playoff losses while one was able to claim their first title in over 15 years. How do the teams stack up this season?

The Bruins are coming off a season in which they made it to the state finals, finishing as runners-up with a 2-1 loss to Walt Whitman. While the team will lose some important players like goalie Mason Smargissi, many top scorers will return, including Lilly Kelley, Olivia Orso and Lily Trout with Trout and Orso being juniors. Being able to return so many experienced starters will be beneficial as the team looks to claim a title.

“Our players are experienced and understand the demands of the season,” said head coach John Camm. “We continue to have high expectations for our program. We have a difficult schedule, so they know not to look too far ahead in the season. And we have a lot of returners coming off a 2021 season where we won 17 games. They are training hard, which will help them with this season.”

For many teams, the toughest loss to overcome is one to their biggest rival. For the Falcons, that loss stings even worse since it came in the playoffs, when they lost to Broadneck in the regional finals. Given how tightly contested that game was, remaining scoreless until the Bruins scored with seven minutes left, the Falcons feel that they have a team that can compete and get past Broadneck this season.

“I expect us to have a very competitive team this fall,” said head coach Rick Stimpson. “We have a lot of quality players returning and a great group of seniors that have done a really good job of bringing the team together. This group is very driven, and they push each other every day in training to get better. Having a lot of depth means players are constantly playing for minutes on the field and that means being sharp every day in practice.”

Two of the top returning players to keep an eye on this season are seniors Sophie Miller and Ava Schultz.

The Falcons opened the season with a 5-0 win over Tuscarora High School. Hanna Verreault and Felcia Fishburne each had two goals, and Eleni Puzas added another. Sydney Holmes had two assists, and Sara Kreis and Emerson Scott each contributed one assist. Delanie Robertson had four saves.

The Cavaliers are coming off a season in which they came agonizingly close to a conference title, finishing as runners-up in the Interscholastic Athletic Association of Maryland (IAAM) Conference A championship. While the end to their season was strong, the team did struggle against teams in their conference as they went 6-4-0 versus conference opponents, while they feasted on nonconference opponents, going 3-0-1. The team will return a strong group of girls led by 13 rising seniors after losing only three girls in 2022. Grace Faulkener, Kate Dovi and Danielle Gargano are some of the key players leading the team’s offense while Grace’s sister, Emma, will man the goal.

Showcasing a stifling defense last season, the Admirals won their first IAAM B Conference title since 2005. Rising junior Skyler Morton scored the game-winning goal in overtime while the defense kept rising senior goalkeeper Zoee Stencil from having to face an onslaught of shots as she had to make only six saves in the game. Stencil and four other seniors are leading a young core that includes Morton and sophomore Eliana Valencia, who assisted Morton for the game-winning goal last season. With such a strong core coming back, the Admirals will look to repeat as conference champs.