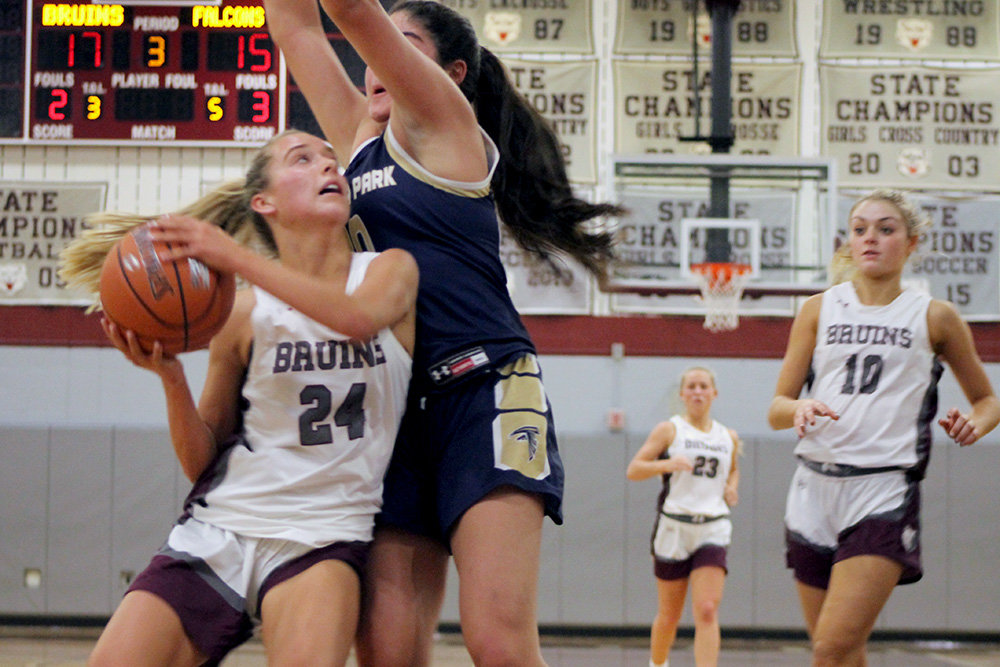 Led by junior guard Hannah Verreault’s 11 points, the Severna Park Falcons girls basketball team defeated the Broadneck Bruins on the road, 29-25, on January 14. Broadneck looked strong early, taking a 7-2 lead midway through the first quarter. The Falcons then responded with a 9-0 run that lasted into the second quarter.

However, the Bruins relied on their strong defense and full-court pressure to force Severna Park into several key mistakes and turnovers, with the Bruins taking a 13-12 lead into halftime.

Both offenses were affected by the strong defensive performances, along with the game not having a good flow due to a high number of foul calls. Due to that, the game went into the final quarter tied at 19. Foul trouble became a problem in the fourth quarter as both teams were in the double bonus less than halfway through the quarter. Despite having scoring chances, Broadneck failed to capitalize, missing foul shots down the last stretch of the game, while Severna Park was able to make theirs to extend their lead and close out the game.

“The biggest takeaway was foul shots,” McKinney said. “Late in the game, I know we can make those shots, but you win some, you lose some. Unfortunately, we had a tough night at the foul line.”

Broadneck’s leading scorer, Lilly Kelley, agreed with her coach, saying that there were points for the taking that Broadneck was unable to get.

“We would have had 10 or more points if we had just made our shots,” Kelley said. “We did a good job getting fouls, and I also think that we need to no-foul so far away from the basket we’re defending and give away those free one-and-one opportunities.”

Even Severna Park head coach Kristofer Dean shared the same sentiment as his counterpart. “A lot of late-game situations that we need to talk about, I’m sure that the girls already know what,” Dean said. “Our job is just to get better every day and see where we are at the end of the year.”

Verreault said that being the starting point guard meant everyone else seemed to look to her for leadership, especially toward the end of the game, but it was a team effort.

“I couldn’t do anything without the rest of my team,” she said. “We’ve been down a couple games, but winning this game could be a turnaround for us for the rest of the season.”

With the win, Severna Park moved to 3-4 on the season, while Broadneck fell to 2-7.