From Navy Fighter Pilot To Founder Of Divine Mercy Academy 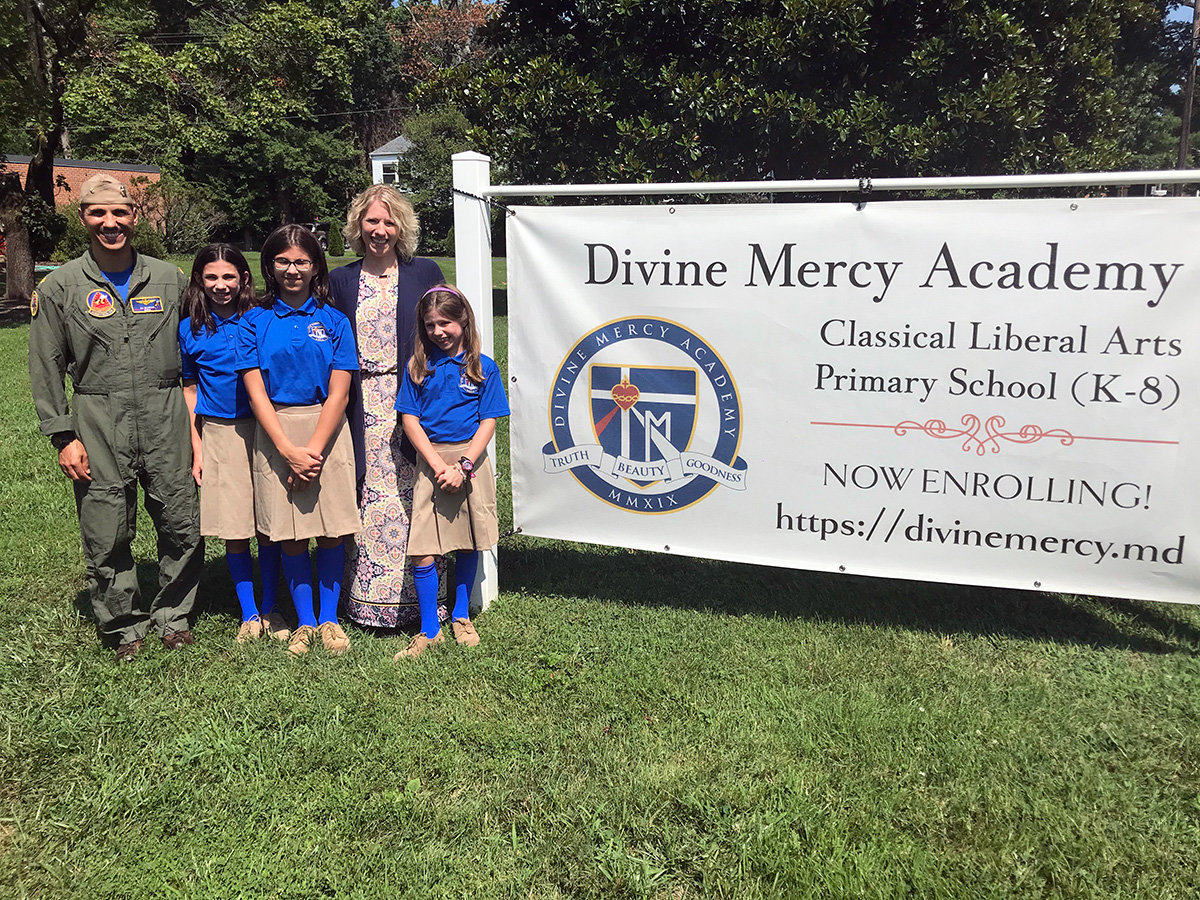 Ali Ghaffari’s story is an all-American one. His Muslim father named him Ali, which means “champion.” But the Severna Park resident would grow to be a different sort of titleholder. Outcast. Scholar. Warrior. Teacher. Servant. Ali Ghaffari was destined to be a champion for Christ.

“My mother was 16 when I was born,” Ghaffari explained. “Unmarried and living in Burlington, Vermont.”

Family members pushed for an abortion, but the pregnant teenager of French-Canadian ancestry was determined to keep her baby. She married the father of her child. They moved to Florida. It lasted three years.

“I remember coming back to freezing Vermont after living in Florida sunshine,” Ghaffari recalled, “and wondering what would happen next.”

In school, the dark-skinned boy with the Middle Eastern name excelled. When mom got clean, she met a local mechanic. Ghaffari was skeptical. Just another space-holder in a revolving relationship door. But something about this man was different. He stayed.

In private moments, Ghaffari’s mom taught her son to pray.

“I will have failed you as a mother if I don’t give you a dose of God before you leave this house,” she said.

By the time he graduated high school, Ghaffari was an honors student. Awarded with a scholarship to the elite Phillips Academy Andover, ancestral proving ground of family dynasties like the Kennedys and Bushes, he now had a front-row seat to the American dream. Suddenly, the boy from small-town Vermont was attending class alongside princes from India and Turkey, the heir to the Goodyear fortune, and numerous athletes destined for professional sports.

With medical school on the radar, Ghaffari attended Colby College, a prestigious “little Ivy.” He coached ice hockey. Dated. And began to notice all his instructors were atheists aggressively advocating their beliefs at the front of a classroom.

“I embraced atheism to justify the life I wanted to live,” he recalled. “My pride and arrogance were through the roof.”

Returning home for the summer, he had a late-night talk with his stepfather and a family friend who quietly advocated for the Catholic faith.

“As we sat under the stars, I rethought my entire life,” he said. “The prestige of academia had been my God. It was torn down in a night.”

Before graduation, Ghaffari met another pivotal figure: a Navy SEAL, a graduate of the U.S. Naval Academy, a man of faith. There was a sense of a corner being turned.

It was decided. Medical school was jettisoned. Ghaffari would fly jets. In Navy flight school, he learned to dogfight, drop bombs and land on aircraft carriers in high seas. He also studied the Catholic faith.

Deploying to the Persian Gulf, the newly minted Navy lieutenant looked down from his F-18 on an unfamiliar landscape.

“Flying over Iran, I thought of my biological father,” Ghaffari said.

After his tour of duty, Ghaffari landed in Corpus Christi, Texas, and registered for a Catholic men’s retreat. He invited his Iranian-born father, who was now living in Florida. As part of the weekend’s program, the men practiced an ancient Catholic ritual. Re-enacting Jesus washing the feet of his disciples at the Last Supper, Ghaffari washed the feet of his estranged father.

And he wasn’t prepared for the reaction: “I met Jesus for the first time,” said his father.

In 2015, Ali Ghaffari became an instructor for the U.S. Naval Academy leadership department, where he taught leadership training to midshipmen. He now teaches leadership to faculty and staff, and coaches at the Stockdale Center for Ethical Leadership. In 2018, he founded the Divine Mercy Academy in Severna Park - a place where teachers “partner with parents in their role as primary educators of their children.”

“Divine Mercy Academy is a full-time classical school where we pursue the true, the good and the beautiful,” Ghaffari said. “We offer a foundation of wisdom and virtue that brings families closer. And we are excited to resume in-person teaching in the fall.”