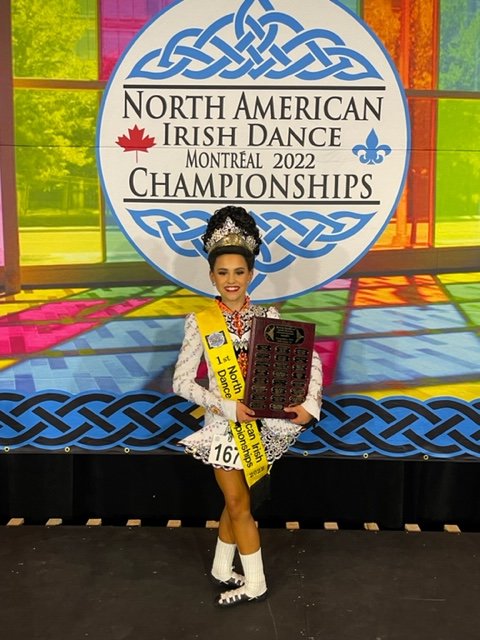 Isabella Renzi was the North American champion for her age group and qualified to compete at the 2023 World Irish Dancing Championships in Montreal in the spring.
Posted Wednesday, August 10, 2022 10:50 am

Reynolds and Renzi, along with 12 top-placing solo dancers, qualified to compete at the 2023 World Irish Dancing Championships in Montreal in the spring.

Isabella Renzi began dancing at age 9 after attending a trial class with her sister.

“I wanted to start taking classes right away,” she said. “I loved the style of dance. It seemed like a lot of fun.”

Fun, and a lot of hard work.

“It’s incredible to think that Izzy only started with us two years ago,” said John Lawrence Morgan. “Her work ethic is exceptional. Her attention to detail and ability to refine her dances are testament to her success.”

Renzi won the under-11 girls title at the Southern Region Oireachtas in December, as well as numerous local competitions, known as feiseanna. Although she felt confident in her training and choreography, she had to beat 80 dancers to claim the North American title.

“The competition was filled with really talented dancers, and I just wanted to go out there and dance my best,” she said. “I have the best teachers in the world, and I’m so thankful to them for helping me prepare for such a huge competition, and for their continuous faith in me. They are always pushing me to achieve my goals, and winning NANs was a dream come true.”

Both Reynolds and Renzi were members of the 20-person drama team that took first place with their performance of “The Belle of Belfast.” Choreographed by Morgan, the drama features a storm that destroys the roof of St. Anselm’s school and includes a class of feisty school children; divine intervention that leads their teacher, Sister Madonna, to compete in a local beauty pageant; and the shenanigans that ensue with competitors vying for the title (and monetary prize) Belle of Belfast.

“I was so happy for this drama team completing its final performance of Belle of Belfast in Montreal,” Morgan said. “Now they can say they are regional, world and now national champions. Effectively, once again winning the ‘grand slam’ of titles.”