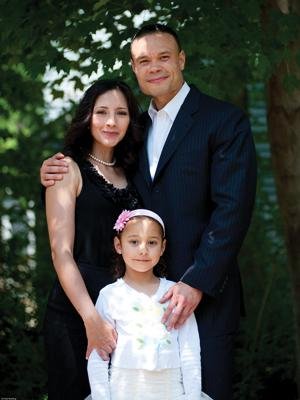 Dan Bongino met his wife, Paula, on a blind date at Sullivan’s - a New York City restaurant - two weeks before September 11, 2001. Before the young Secret Service Agent could even ask for a second date, terrorists struck the World Trade Center in the deadliest attack on U.S. soil in the nation’s history.

“I kept calling her at her office over and over,” said Bongino. “Paula literally worked at Ground Zero at the Securities Industry Association. So I was worried, really panicked.”

Unbeknownst to Bongino, his future wife was thousands of miles from New York City, visiting her mother in Nevada. It was an unnerving start to the couple’s relationship, as Colombian-born Paula Martinez immersed herself in her career as a director of web development at the Securities Industry Association while Bongino climbed the ladder in law enforcement.

“Ultimately, I think she found my persistence endearing,” said Bongino. Ironically, years later Dan and Paula returned to Sullivan’s, while Bongino was on assignment at the United Nations. With a flair for surprises, he asked Paula to dinner at the scene of their first date and then asked her to marry him.

“I said ‘yes’ and was very emotional,” said Paula. “Even though I could tell when he picked me up from the train station that day something was up. He was a Secret Service agent, but I could always read him like a book.”

“The first time Paula’s mom met me she didn’t like me,” recalled Bongino. “It was like standing in court before a very strict judge. It was only years later when I caught her saying something nice about me when I walked in from another room that I finally knew she liked me.”

In 2002, when Dan was working at the White House on the president’s security detail, the young couple began the process of house hunting. When they made their way to Severna Park, the chemistry was immediate.

“The first time I saw Severna Park I knew that’s where I wanted to live,” said Paula. “It just looked like home. When I drove down our street in Stewart’s Landing, I said ‘We’re buying this house.’ It just felt right.”

They bought the house on the spot, joined St. John the Evangelist Church, bought a membership to Big Vanilla Athletic Club, and even made some canoeing excursions off Old Man Creek. The transition to life in the Chesapeake Bay region was complete. Two years later, their oldest daughter Isabel was born.

Despite the fact that he had spent a career protecting politicians, Dan Bongino never dreamed of becoming one until his first child was born. He could see the political problems of his generation being carelessly passed to the next. As a student of business and finance, he knew the huge deficits being accrued would soon result in dire economic circumstances.

Today, with 6-month-old Amelia having joined the family, Dan Bongino is more intense than ever about cleaning up the economic mess in Washington.

“I spent my entire life studying macro-economics and the writing is on the wall,” said Bongino. “An entire generation will be left holding the bag if we don’t come through in November.”

Best public colleges in every state

Best public colleges in every state

The worst beers in the world, according to Beer Advocate

15 of the most expensive celebrity weddings of all time