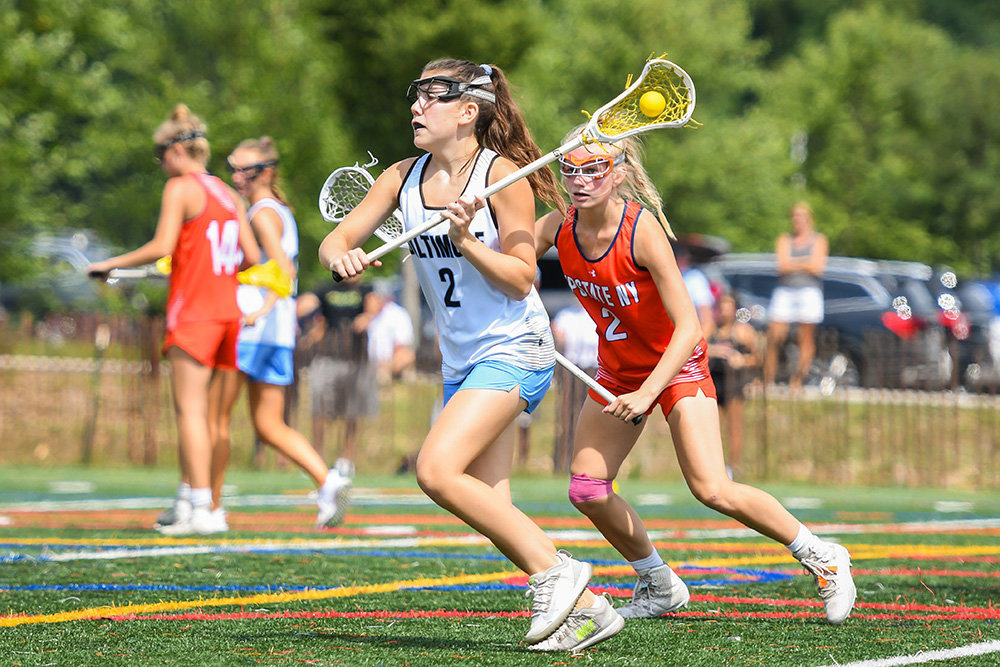 Ava Baselga’s play last summer led to her being placed on the All-America Lacrosse watch list for 2025.
Photo courtesy of 24 Seven Sports Photography
Posted Thursday, November 3, 2022 10:05 am
By Kevin Murnane

Baselga’s performance also led to her being placed on the All-America Lacrosse girls lacrosse watch list for 2025.

The watch list is compiled for players who have potential to be invited to try out for the national All-Star game after their senior year. The All-Star game showcases the best 44 players in the country where selectees represent their region and are chosen from their tryout, high school and club performances.

Baselga started playing lacrosse at 5 years old in the Elvaton feeder system, and by the third grade, she switched to the Green Hornets program in Severna Park. In the fourth grade, Baselga joined the M&D Lax club team and has played for coach Kerri O’Day since then.

“Ava is a very smart player and has a high IQ for the game,” said O’Day, noting Baselga’s creativity. “She anticipates the play before it happens, and her best trait is she is a dedicated teammate who makes other players look great.”

Baselga plays attack and her strengths are feeding other players and driving to the net. Distribution is something that she’s thrived on last summer as she led her team in assists.

“I’m working on being more of a dual threat,” Baselga said. “I like to take more risks and possibly become more of a balanced scorer.”

Being only a sophomore, Baselga will have to try out for Spalding’s varsity squad this upcoming spring, but she caught the attention of the school’s varsity head coach, Tara Shea, when she competed on the junior varsity team last year. She’ll also be able to play with her older sister, Isabel, if she makes the varsity squad.

“She’s the quarterback of the offense,” Shea said. “Ava can feed the ball in very tight spaces and had been a key player on her past teams. I know she had a breakout summer season, and we look forward to seeing her in tryouts.”

Baselga is currently in strength and speed training as well as competing in tournaments for her M&D club team.

“By going to all of these tournaments, I have met players from across the country, and I enjoy that part of being on a regional team,” Baselga said.

M&D club lacrosse has 17 games during the fall as well as five summer tournaments. Despite all the travel, games and training, Baselga hasn’t let her classroom performance slip. She is sporting a weighted 4.3 GPA at Archbishop Spalding. Beselga is considering concentrating in medicine when she attends college.

Other local players who have been named to the watch list are Bronwyn Bolton from Severn School and Avery Saviano from Severna Park High School.