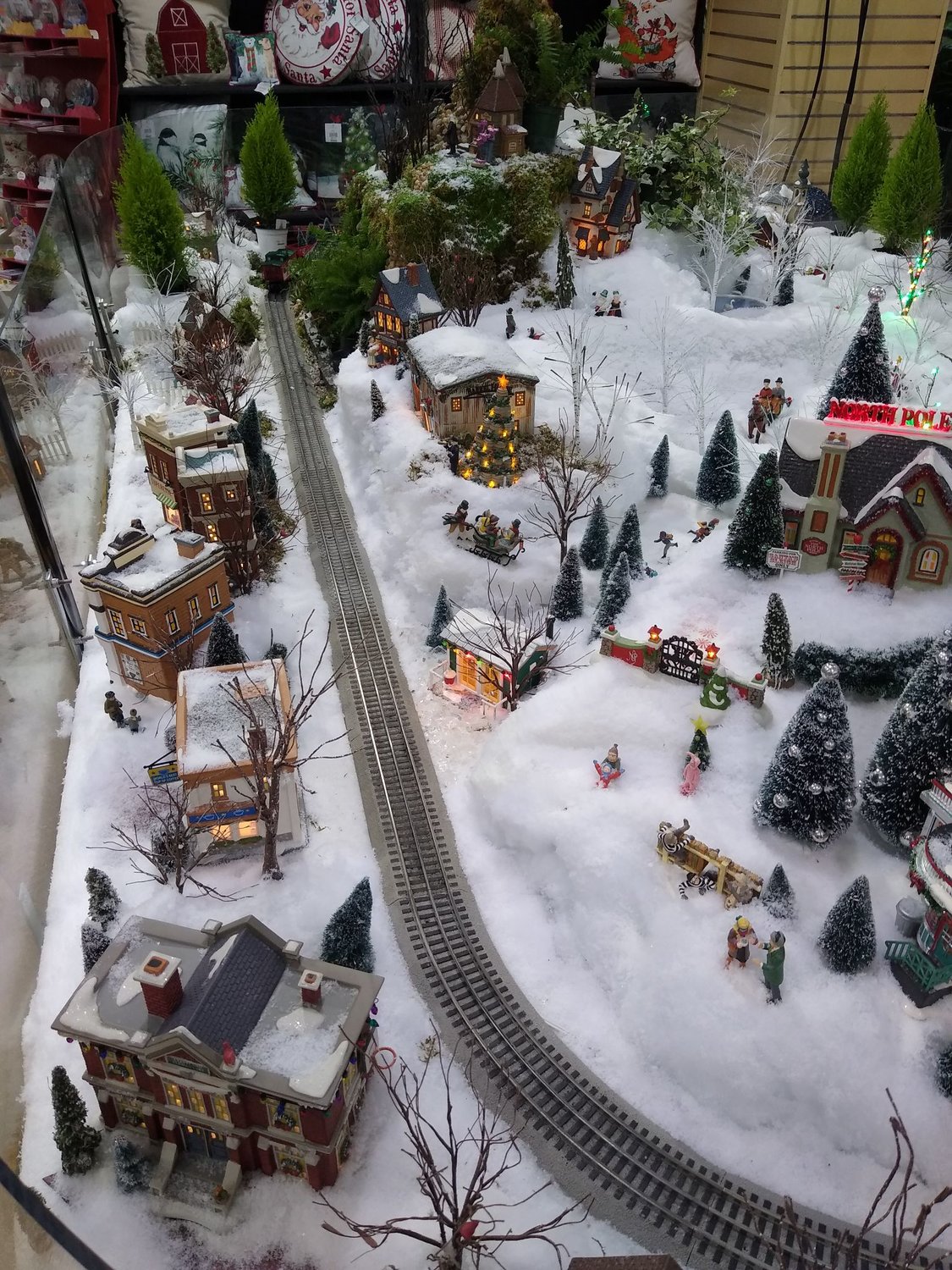 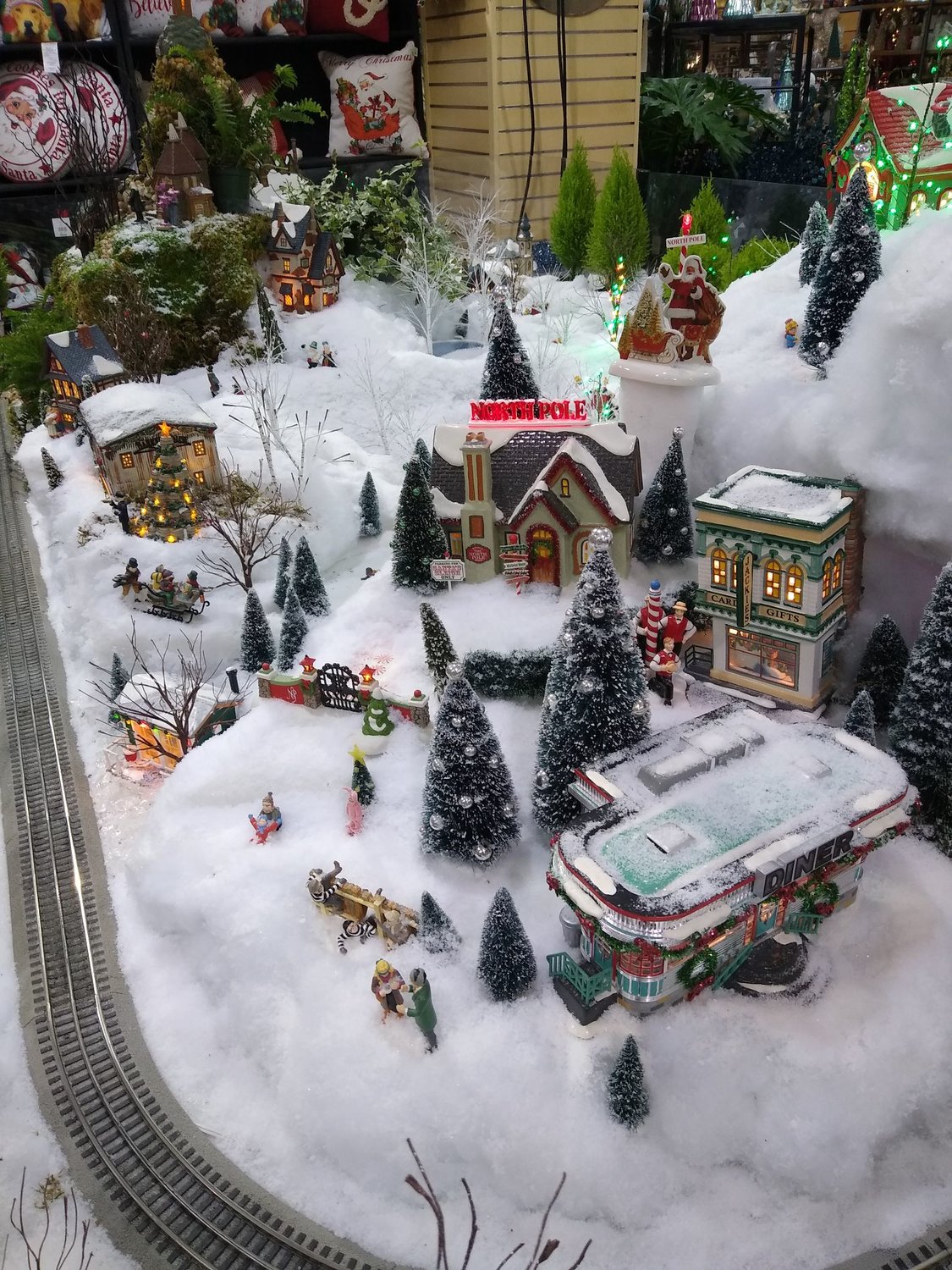 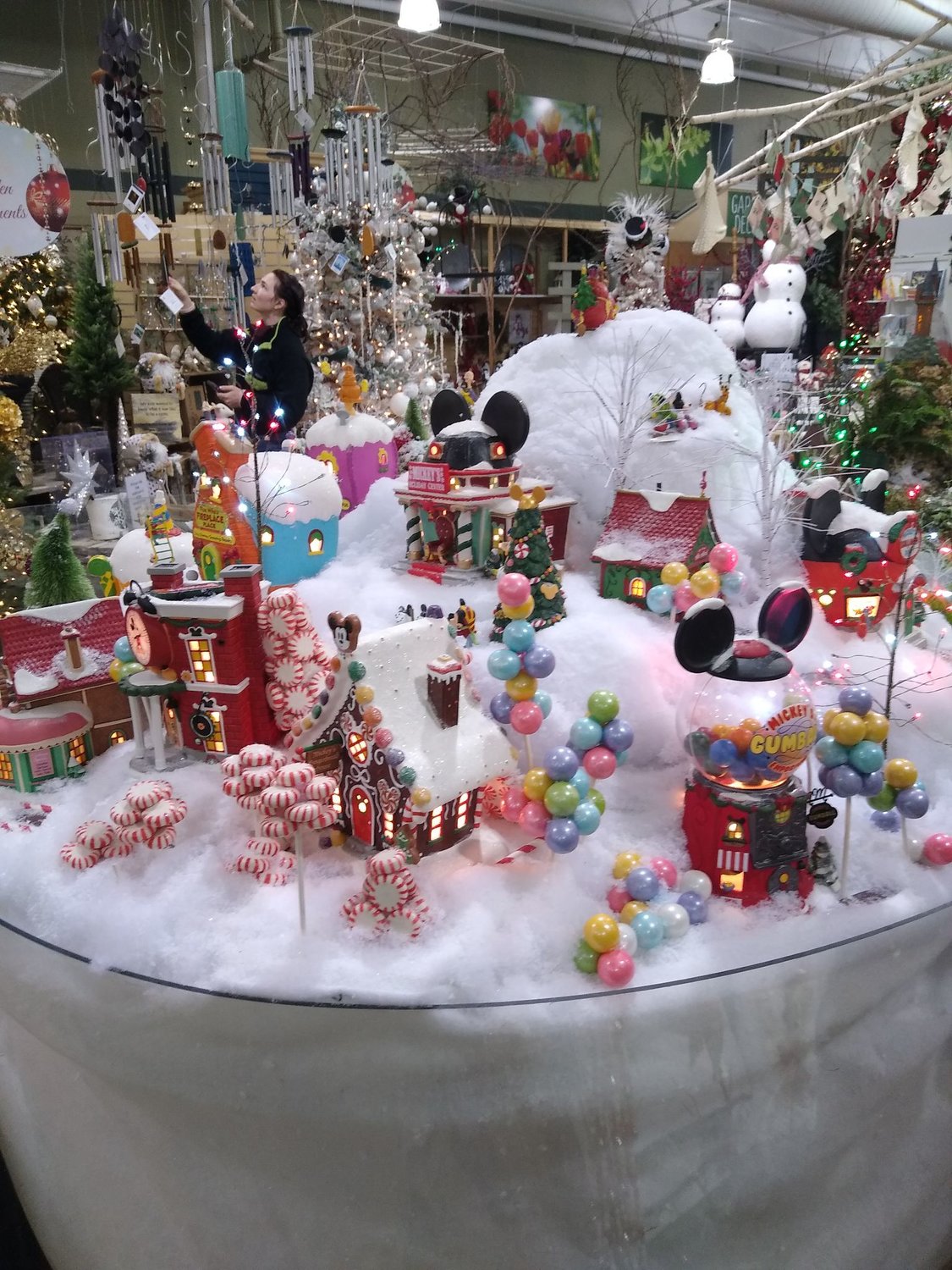 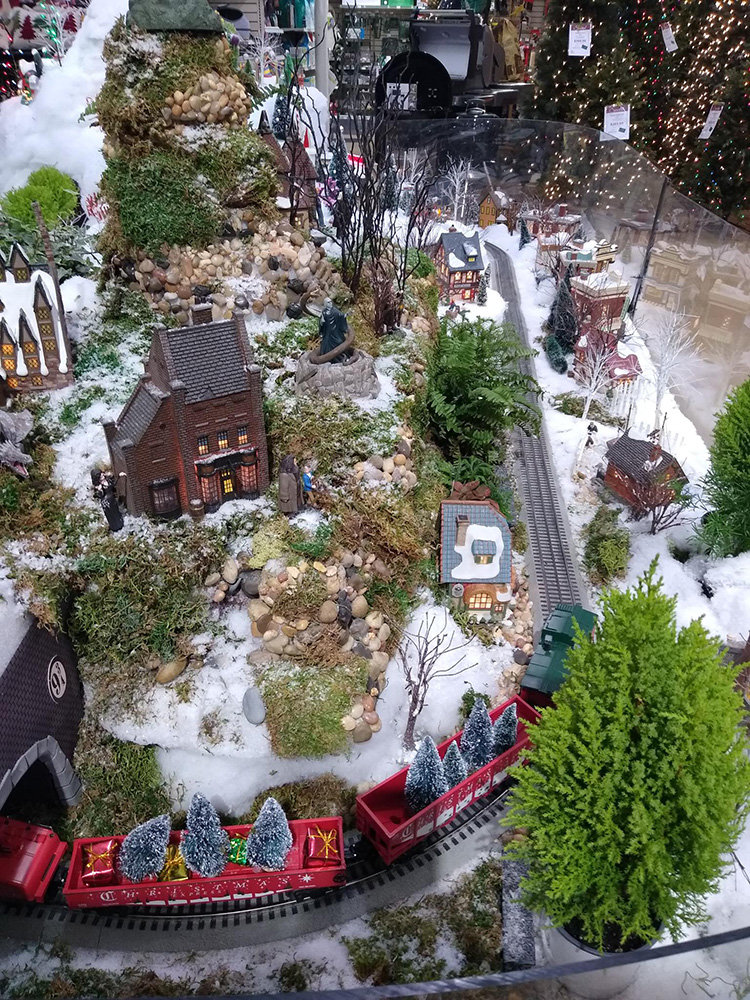 At Homestead Gardens in Severna Park, the train garden is arranged differently each year and visitors can see the Lionel Express train cars navigate around villages with many recognizable landmarks.
Previous Next
Posted Wednesday, November 16, 2022 3:30 pm
By Mark Patton l mark@severnaparkvoice.com

Holiday train gardens are a tradition steeped in nostalgia for many families. This area offers plenty of options for those looking to marvel at model trains traveling through realistic villages of holiday cheer.

According to the Lutherville-based Fire Museum of Maryland, German immigrants are believed to be the first to set up Christmas gardens, which were religious based and in homes. In the mid-1800s, people started adding small wooden trains around the outside for children to push around. As train sets became electrified, they soon took their place in the gardens.

Captain Eugene Daly of Baltimore City’s Engine Company 28 is believed to be the first in the area to set up a Christmas train garden, which he did during World War I.

Others soon took notice of Daly’s initiative and more firehouses in the region built gardens of their own. Around 1939, the fervor dulled as the fire departments felt too much time was given to constructing the gardens and the crowds of admirers were impeding their fire-fighting operations.

The Severna Park location of Homestead Gardens has been operating its train garden every holiday season since the store opened in 2010. This year is no exception as the display will be chugging along until Christmas Day.

Staff at Homestead Gardens put a high value on tradition, and they say the trains play a large part in the store’s holiday experience.

Steph Stowell, who serves as the store’s hardgoods manager and created this year’s holiday train garden at Homestead Gardens, said many families come year after year to enjoy the setup.

“For a lot of people, it’s nostalgia,” Stowell said.

The train garden is arranged differently each year at Homestead Gardens and visitors can see the Lionel Express train cars navigate around villages with many recognizable landmarks.

Whether it’s the leg lamp and elementary school from “A Christmas Story” or scenes from “Harry Potter” and “Elf,” or Mickey and Minnie Mouse for the littlest visitors, there’s something for everybody.

“They’re excited to recognize the characters,” Stowell said about visitors to their display.

Stowell explained that for a lot of children, the train serves as a representation of Santa bringing presents.

Homestead Gardens in Severna Park is located at 522 Ritchie Highway.

For those seeking to add a dash of seasonal weather to the experience, Clayville Railroad Outdoor Train Garden in Pasadena features about 450 feet of track spread across 1500 square feet of fenced-in property. The train gardens at Clayville are set in a landscape with live trees, plants and natural stones. The trains also go over a bridge constructed over a pond and run under a waterfall through a tunnel.

Although there isn’t an admission fee for the train gardens, donations are encouraged. The donations each year go to assist Anne Arundel County families who have a child in active cancer treatment. This year, a pair of local children were chosen to benefit.

Although the train garden is the main display, those who donate are provided either a free hot chocolate or hot cider and a s’mores pack to enjoy around the adjacent fire pits.

The display started in 1999 when Pinnix’s grandparents, Jim and Virginia Smith, started it as a retirement hobby. In 2012, the display was opened to the public as an annual holiday tradition.

Setting up the display is no small chore as multiple weeks are spent getting everything just right. But for part owner and operator Steve Pinnix, it’s worth it.

“From where we started to where we are now with attendance and operations is astonishing,” Pinnix said. “Going off last year’s numbers and with the expectations of 10 to 15 percent more people this year, we are estimating around 8,000 to 9,000 people will attend this year’s event.”

Clayville Railroad Outdoor Train Garden will be open each Thursday to Sunday in December, weather permitting, from 5:00pm to 9:00pm. The attraction is closed on Christmas Eve and Christmas Day.

Pinnix said new attractions are in store this year on select nights. A complete calendar of special events can be found on Clayville’s Facebook page.

The train garden is located at 8269 Baltimore Annapolis Boulevard.

Although the list isn’t complete, several other popular train gardens in the area include Marley Station Mall in Glen Burnie. The mall offers a train garden with many interactive elements through January 8. Cheers & Spirits in Arnold also has a display in its store for shoppers to enjoy this season.

The Baltimore & Ohio Ellicott City Station Museum has its holiday train garden set up from November 25 to January 8. The museum is open Wednesdays and Thursdays from 10:00am–3:00pm and hours for Friday to Sunday are 10:00am–5:00pm.

Whether you’re a holiday train garden veteran or a first-time attendee of a display, there’s enjoyment to satisfy young and old.