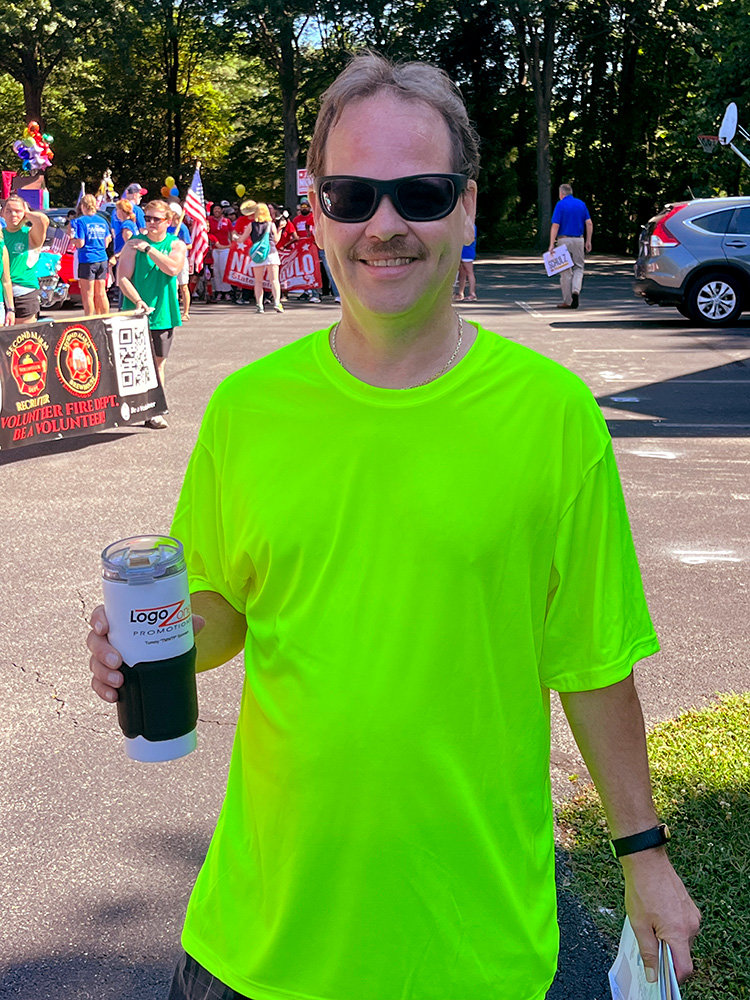 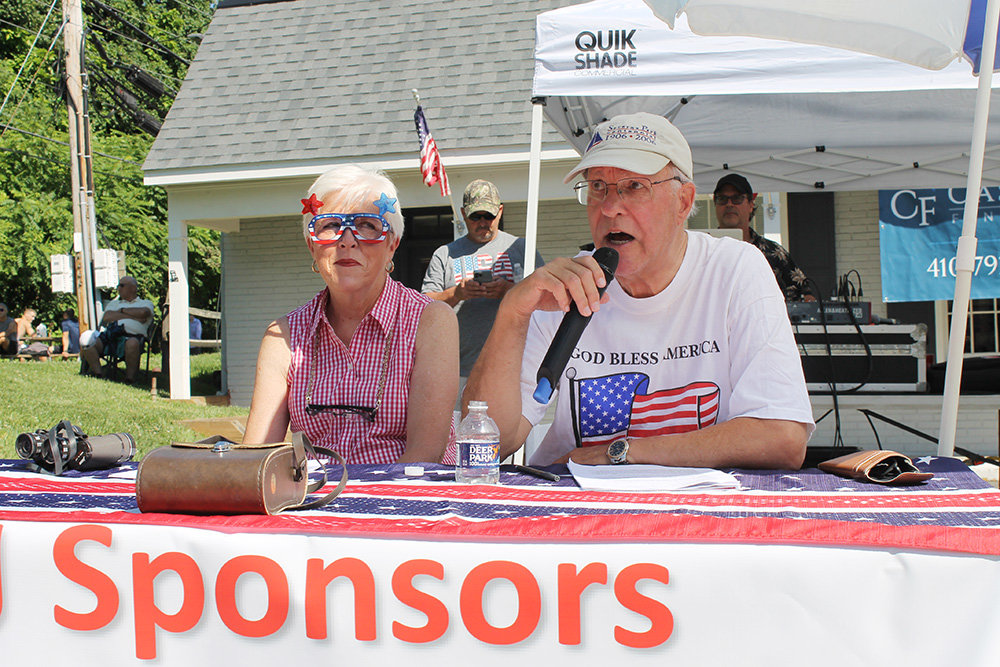 Earl Schaffer has been the parade's volunteer emcee for decades.
Photo By Brian Lancione 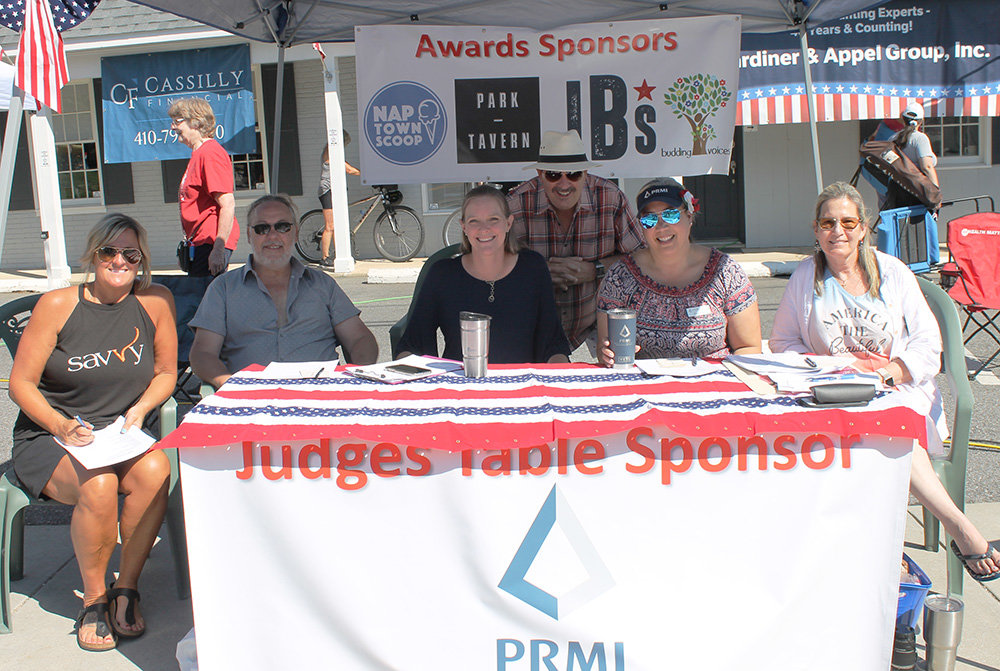 This year the judges' jobs were even more important, as there were cash prizes up for grabs.
Photo By Brian Lancione
Previous Next
Posted Thursday, July 7, 2022 4:08 pm
By Lauren Cowin

Perfecting the spectator experience for the Fourth of July parade requires thoughtful planning and execution – from scoping out seats along the route and placing chairs in the wee hours of the morning, to packing adequate supplies to keep young children content for the two-hour event.

If that much forethought goes into viewing the parade, one can imagine the time and manpower necessary to bring the parade to life. In addition to the dozens of residents who plan entries for their organization, business or neighborhood, a cadre of volunteers serves as the “boots on the ground” to make sure the time-honored tradition goes off without a hitch.

“Our annual Independence Day parade is a massive organizational undertaking, and there are many behind-the-scenes volunteers who make it run smoothly. We have been so fortunate to count on these volunteers for years,” said Liz League, CEO of the Greater Severna Park and Arnold Chamber of Commerce and official parade organizer.

Jim Fernen, Manhattan Beach resident and owner of Vertex Carpentry, has been involved with the parade for more than a decade. He’s one of the first and last volunteers in action.

“I pick up cones at the Anne Arundel County Department of Public Works and drop them off at Woods Church, then pick them up after the parade and take them back,” Fernen said. “It’s not a huge undertaking, but I guess you could call it my bit.”

These cones are utilized to direct parade traffic and parking, allowing for a safe event.

Perhaps the most frenzied part of the parade is the staging, or the organizing of all the entries in the St. Martin’s-in-the-Field Episcopal and Our Shepherd Lutheran parking lots prior to takeoff. Tommy Sommers, owner of LogoZone Promotions, has led this effort at one of the parking lots for the past three parades, and tells League the busier, the better.

“I usually run a parking lot pretty well. I told [League] to put me wherever she needs the most help, that is the busiest, and I’ll handle that,” Sommers said, adding, “It gets really crazy and it’s a very tight and constricted area, so you need a lot of supervision for sure. Otherwise, I don’t think things would move. It would be a big cluster jam.”

Despite the stressful nature of this endeavor, Sommers enjoys his parade role.

“I love what I do – it’s coordinating a nice, huge event for the neighborhood,” he said. “I believe in the Eagle mentality — help lift others up and you can only be lifted higher yourself.”

At the end of the route sits the panel of volunteer judges, one of whom is Stacey Cassidy, owner of Savvy Consignment.

Cassidy has been judging for 12 years, and while the role was somewhat difficult to juggle when her children were younger, now she says, “What would I do if I didn’t do it?”

Cassidy said the hardest part of the judging job is not having an award for everyone.

“Anybody that is doing something is working really hard; you feel bad having to say they didn’t win,” she said.

Tying it all together is longtime Severna Park resident Earl Schaffer, who has been the voice of the parade as the volunteer emcee for decades. While it can sometimes be challenging to make sure every parade entry gets its due attention, Schaffer lauds the work of everyone else involved over his own.

“My ‘job’ is an easy one,” Schaffer said, “The volunteers along the parade route, the sound system supplier and operator, the folks who provide the online communications, the people who agree to judge the participants, and frankly the participants who take their time and efforts to plan, and actually walk, ride in the parade, are the folks who deserve the credit, and it is my job to attempt to provide it.”

One thing all of these volunteers have in common, other than a willingness to serve, is an immense pride in the Severna Park community and its traditions.

“It’s a slice of American pie here that you don’t see in every community,” Fernen said. “People just have a sense of pride in this community and they love the parade!”