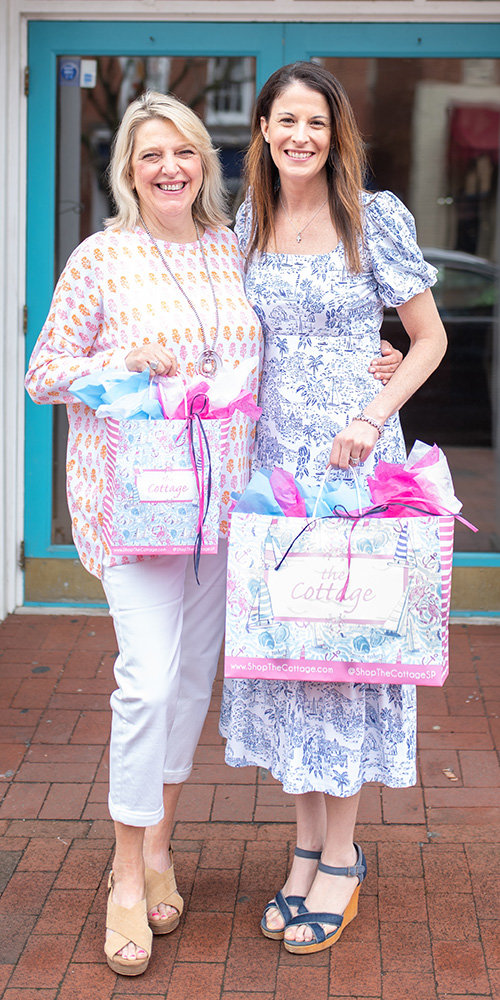 Sue Gauthier and Sarah Bender, co-owners of The Cottage, see each other as family instead of just business partners.
Photo courtesy of Amanda Paige Photography
Posted Friday, June 10, 2022 12:01 am
By Lauren Cowin

Doubling and reinventing her store has become something of a habit for The Cottage owner Sue Gauthier.

“We haven’t had much time to reflect because we keep moving forward,” Gauthier said.

It has been 35 years since Gauthier took over the business, which was then called Dawson’s Country Cottage. She moved the store, doubled its size and renamed it Country Cottage. Several years later, she moved again to her current location in Park Plaza, changing the name and concept to today’s “The Cottage” and, you guessed it, doubled the size for a second time.

Her most recent expansion of the trendy women’s clothing and accessory boutique was of a different variety. She opened a second store on Main Street in Annapolis and added a business partner, longtime manager turned COO Sarah Bender.

“I said, ‘No, I’m not doing this right now’ and Sarah said, ‘If you do it, I will be your partner.’ Not as my manager but as my business partner, so I said OK and that’s how it happened,” Gauthier said.

“Sue and I both have very strong faiths and we’re like, ‘You know what, if God opens every door, fine, we’ll do it,’ thinking it will never happen. And then everything automatically aligns and the rent is right and the team is right and it just falls perfectly in our laps and we’re like, ‘OK, here we go,’” Bender said.

Gauthier and Bender have deeper roots than the nearly 10 years Bender has managed The Cottage. Bender is the best friend of Gauthier’s oldest daughter and Gauthier has known Bender since she was 5 years old, and considers her family.

Any span of 35 years is sure to present its own unique experiences and challenges, but the last two years were unlike any other with the rise of the coronavirus pandemic. When businesses were forced to shut their doors to customers, The Cottage went full steam ahead into e-commerce.

“We had been trying for years to get our website up, and we never had time because we were growing,” Gauthier recounted. “We were just always a month behind in what we were trying to accomplish, and when [the shutdown] happened, we just buckled down and Sarah stayed and we were able to keep some top people – they worked all the time, they worked full-time during the whole thing and got the website up.”

For several months, Bender and operations manager Marsha Fowler, whose hard work and determination they credit for the success of the website, manned the empty store.

“We redid our whole website which was intense, and we locked the doors and we did everything online. Over the phone, we were FaceTiming with customers,” Bender said.

Adding to their success during this unforeseen circumstance was that their employees who had been sent home insisted on helping by making deliveries and sewing masks, even when they weren’t being paid.

“It’s just a testament to our whole team. The only reason Sue and I are successful is because of our team and because of the community,” Bender said.

That team has grown from a handful of employees, when Gauthier bought the business, to more than 30. Between the two locations there are eight full-time employees, including Severna Park manager Courtney Caughy and Annapolis manager Ruthie McGuire.

“A total testament to the way that Sue’s built this company is our team is unbelievable, and when people come, it’s like a family. We have people that have worked here for over 20 years,” Bender said.

As for what hasn’t changed in the past three and a half decades, the answer is not much. And that’s the point.

“The only thing constant at The Cottage is change. The change is the trends and that’s the fun of it,” Gauthier said. “It has survived and grown and it’s just a blessing in my life. I’m very happy that I still, at age 67, love going to work.”

Well, change and the support of the Severna Park community, which has been a definite constant for the business.

“We try and give back to as many causes and donations and everything, but we could never begin to give back to Severna Park as much as they’ve given to us,” Bender said.

Using History To Decipher The Market