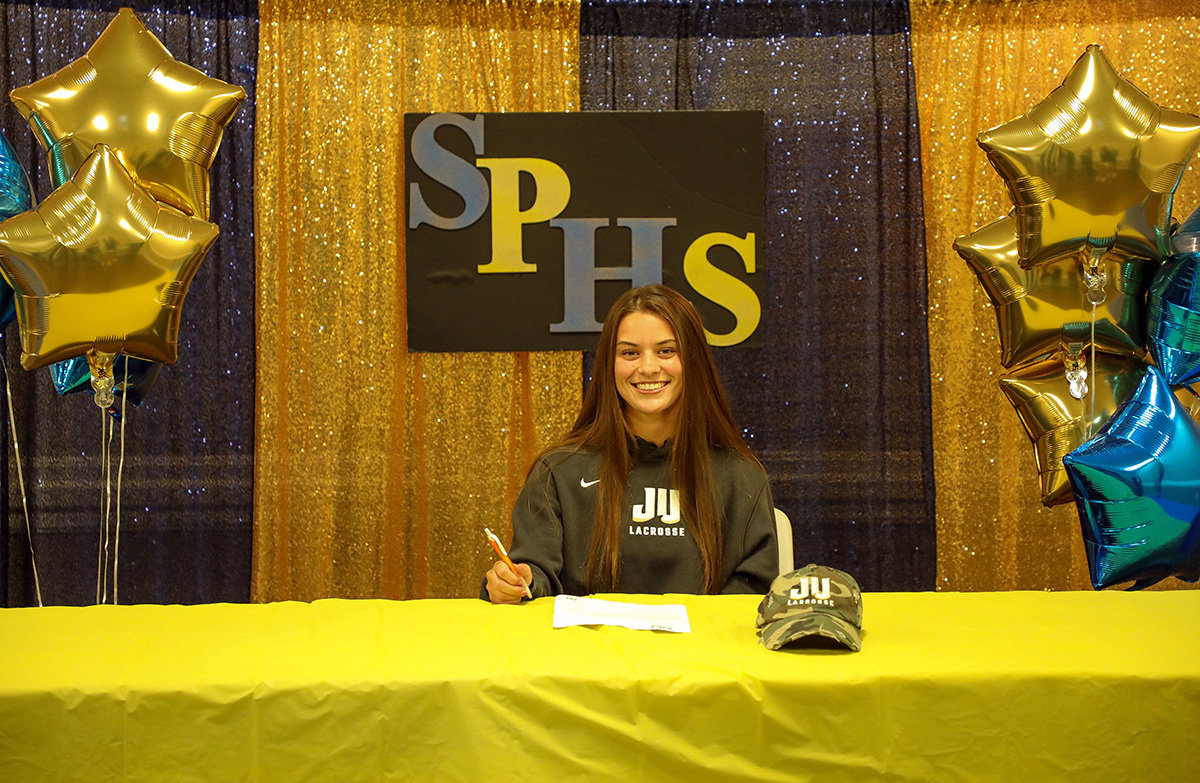 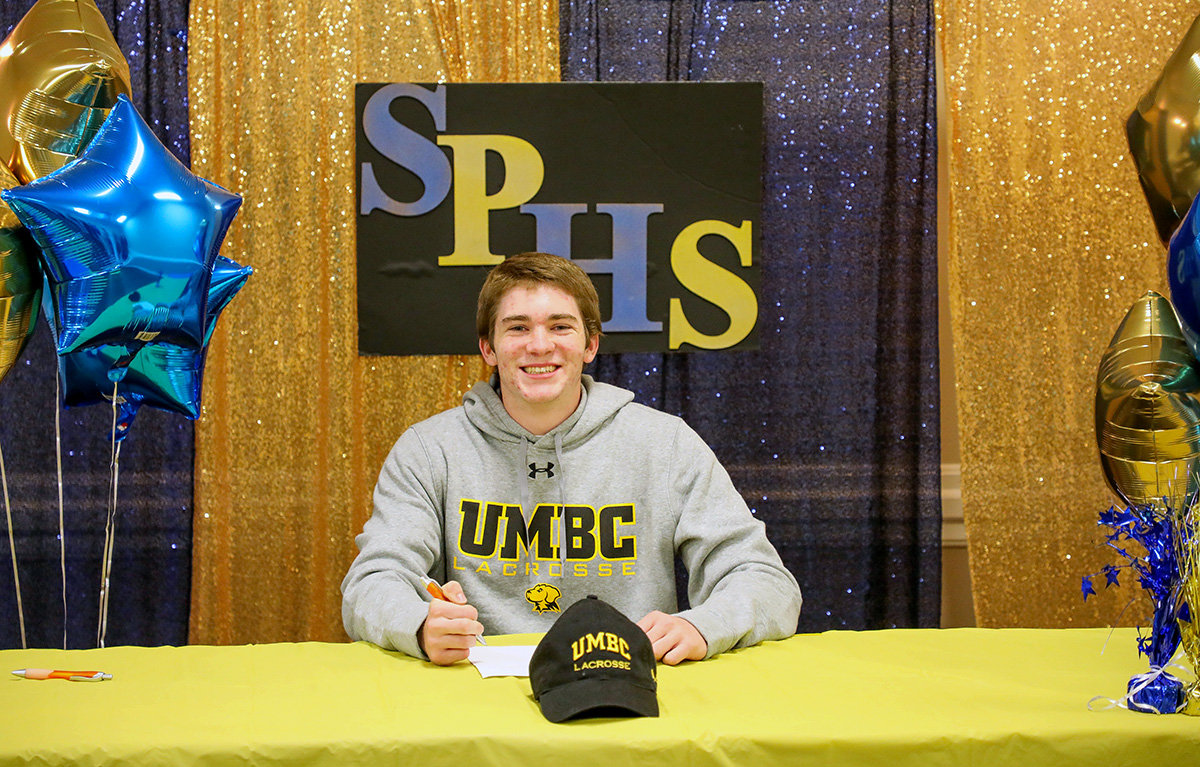 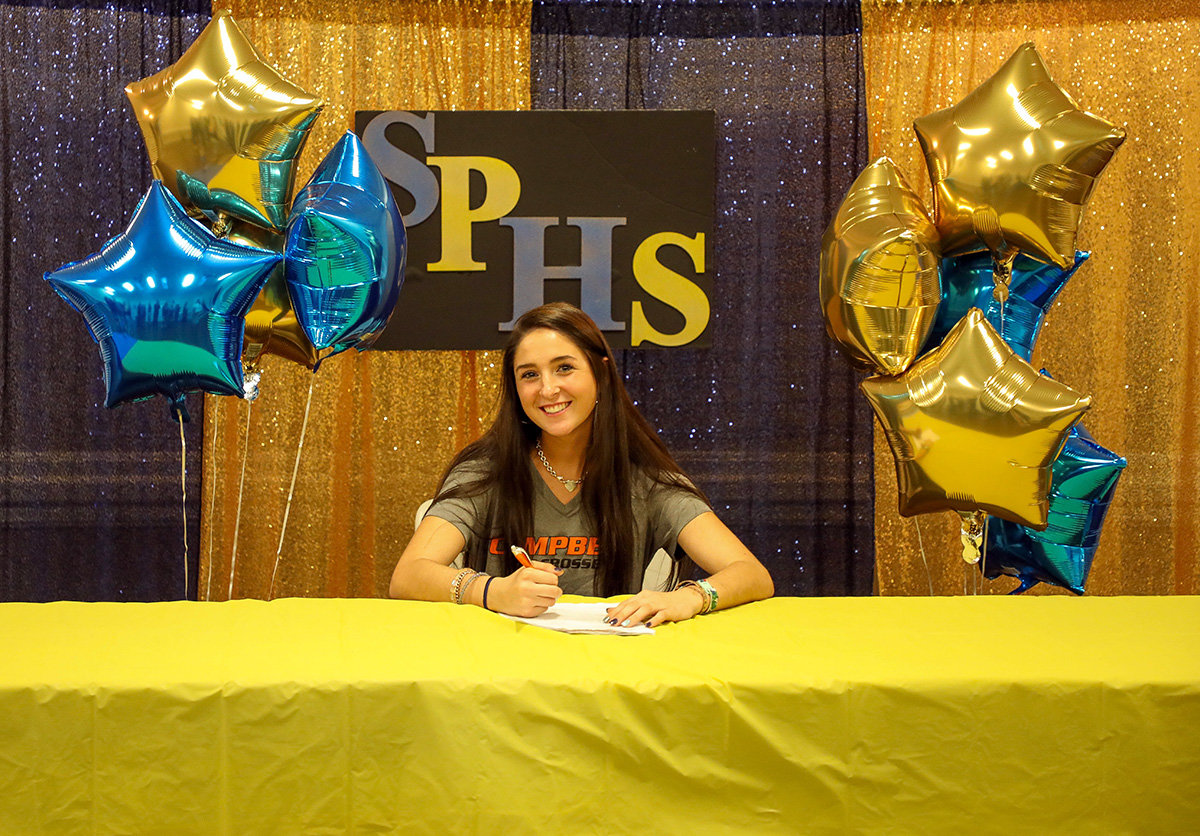 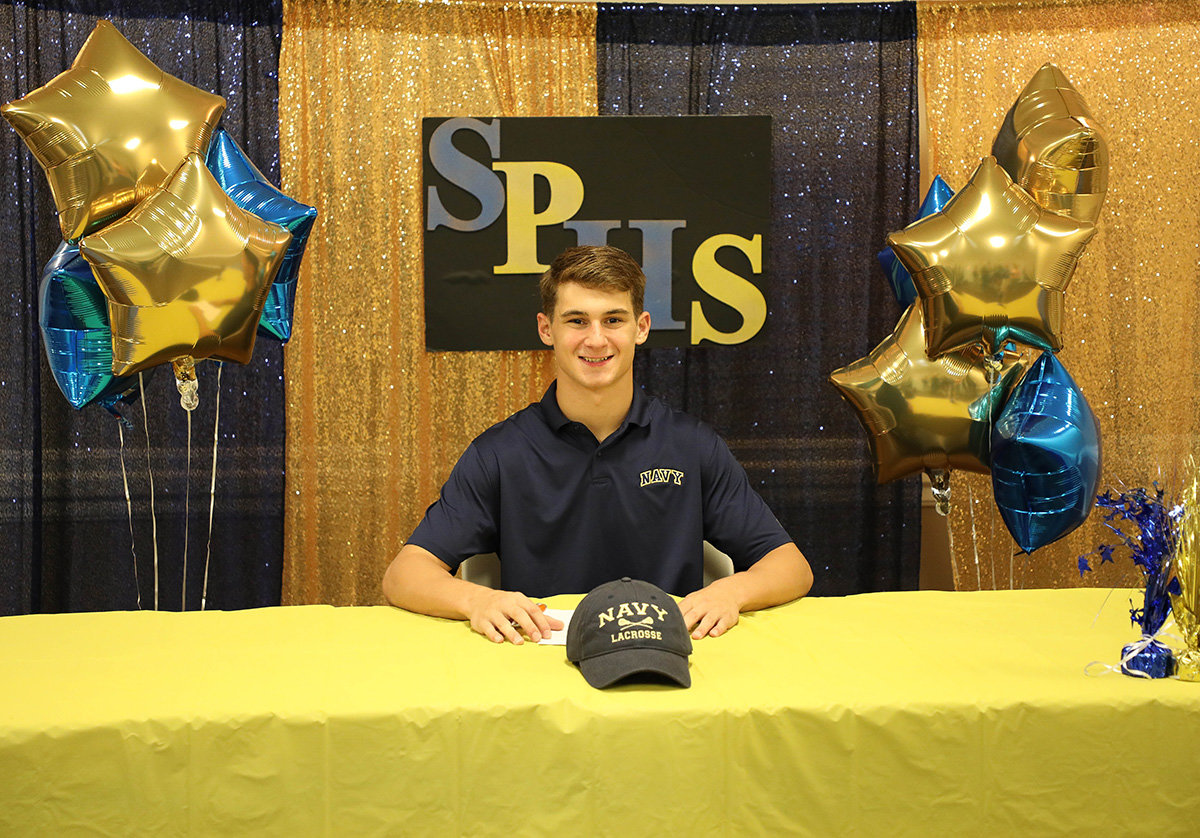 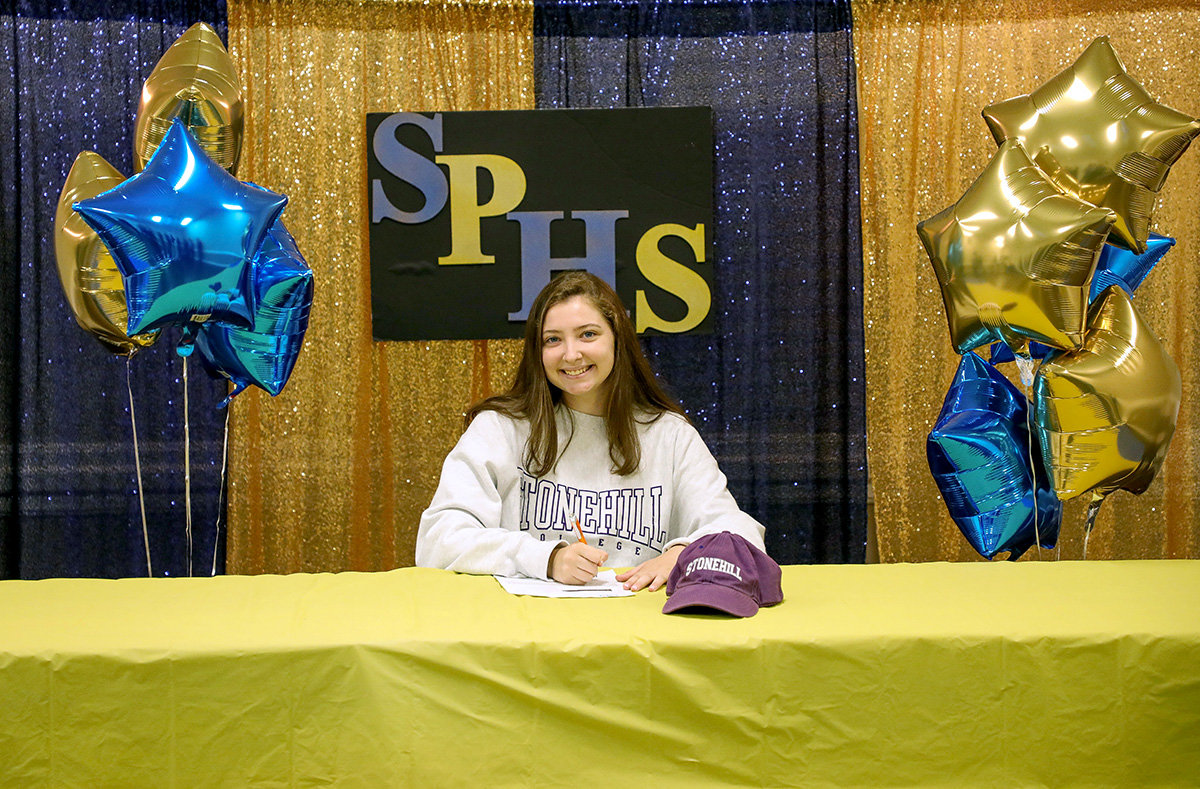 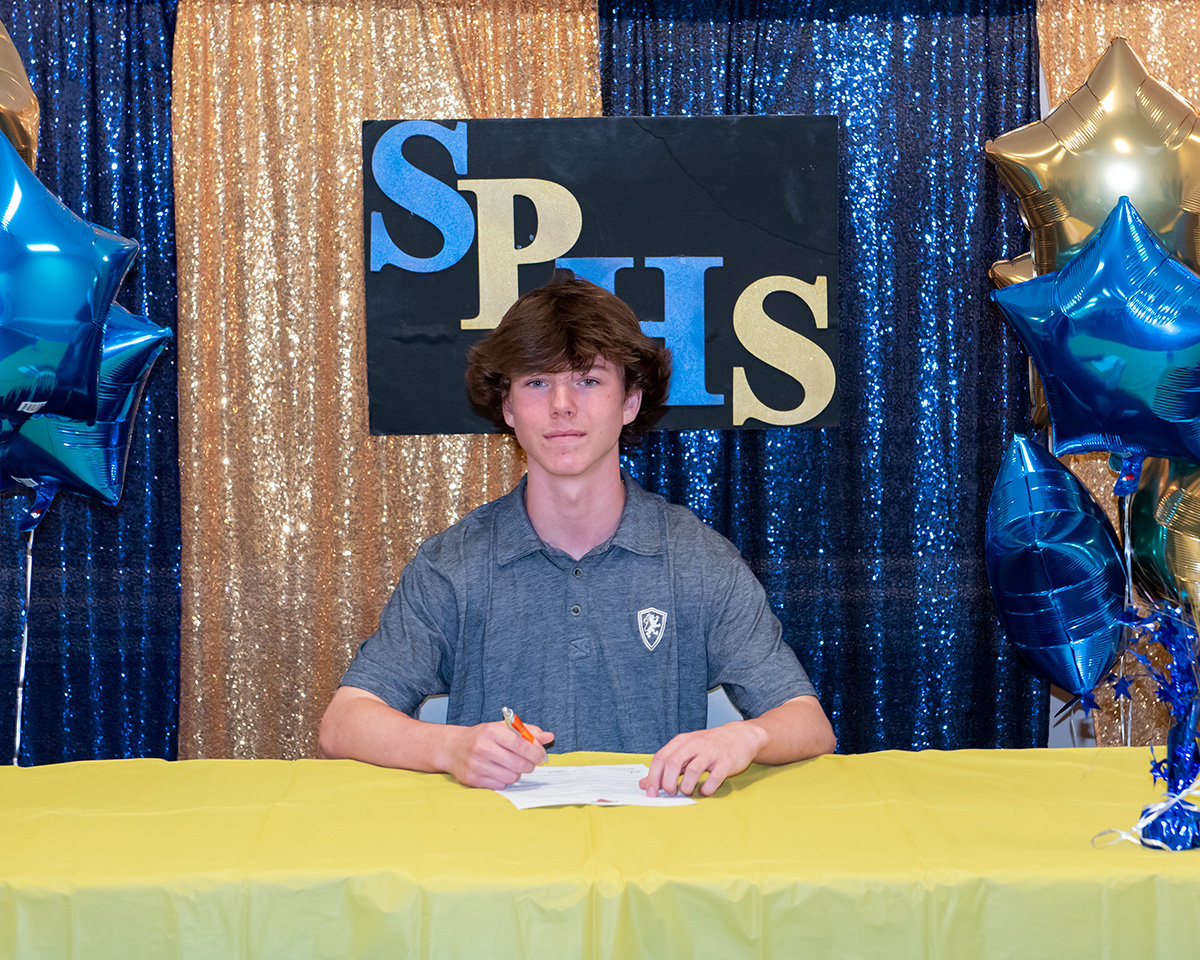 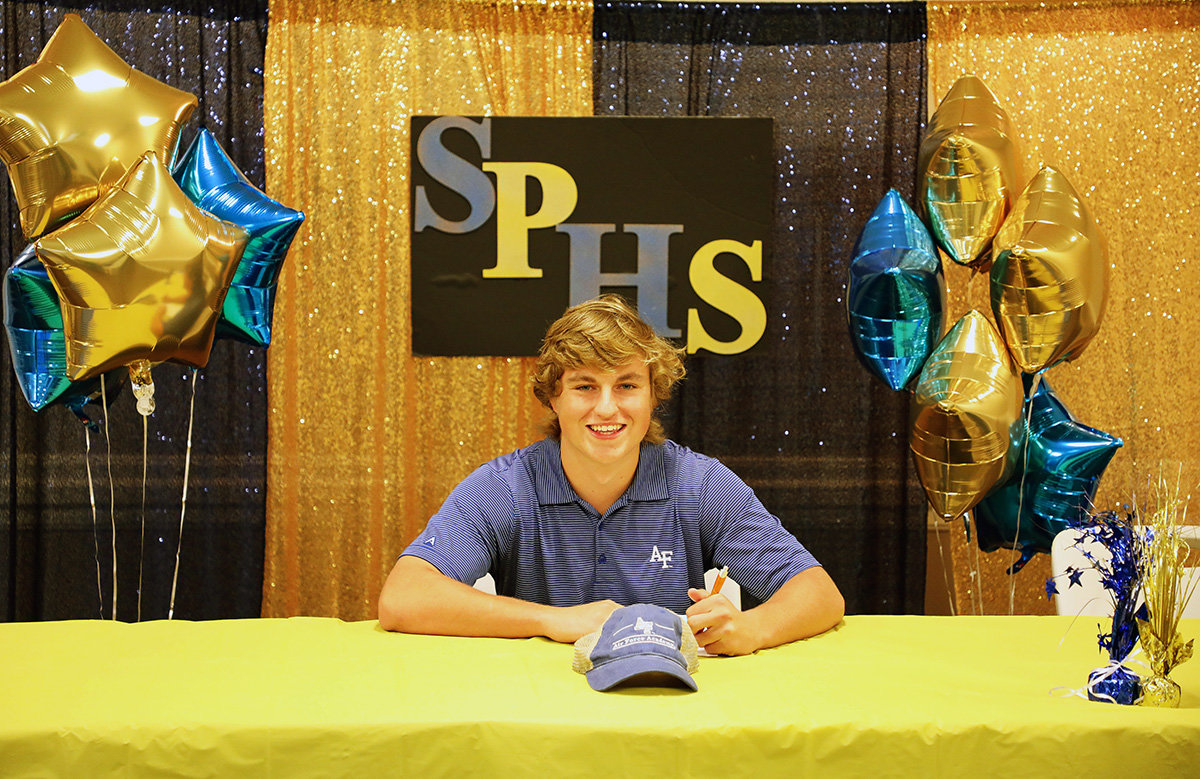 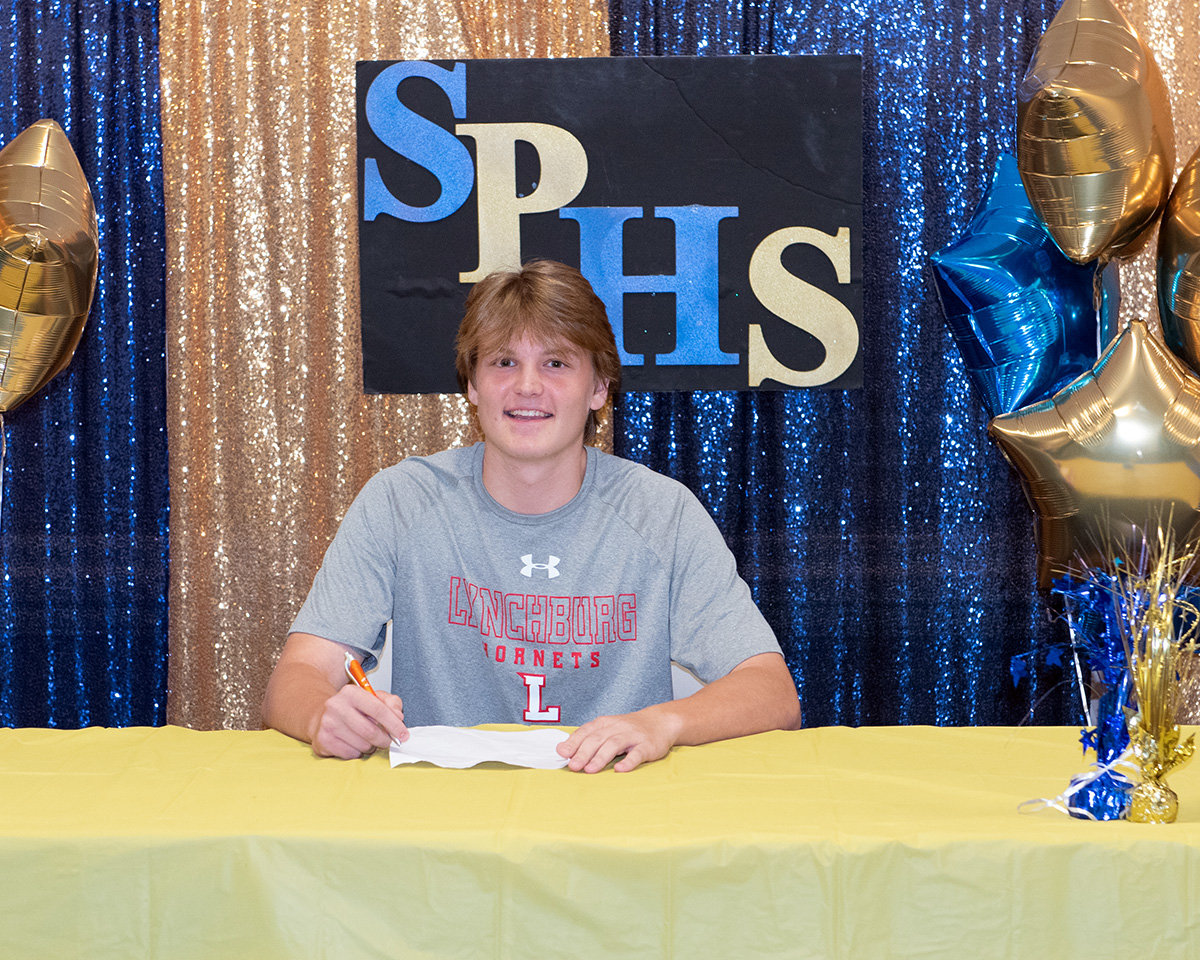 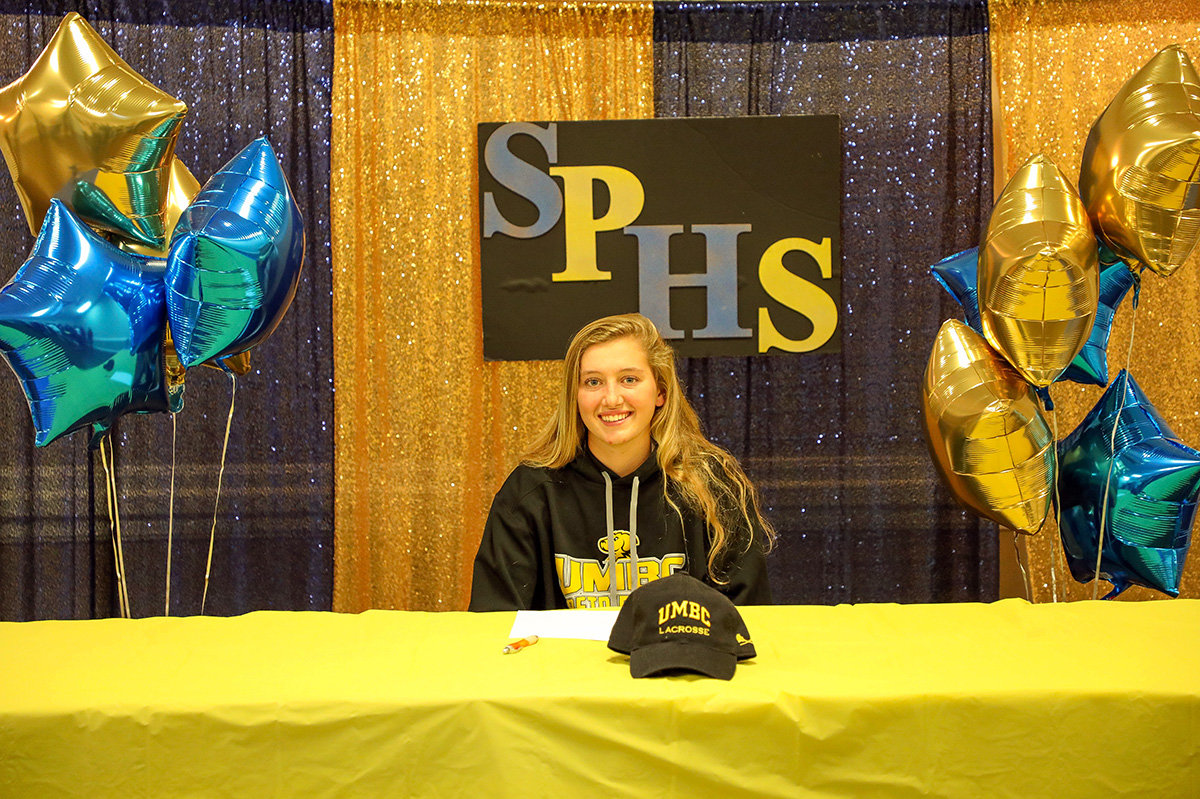 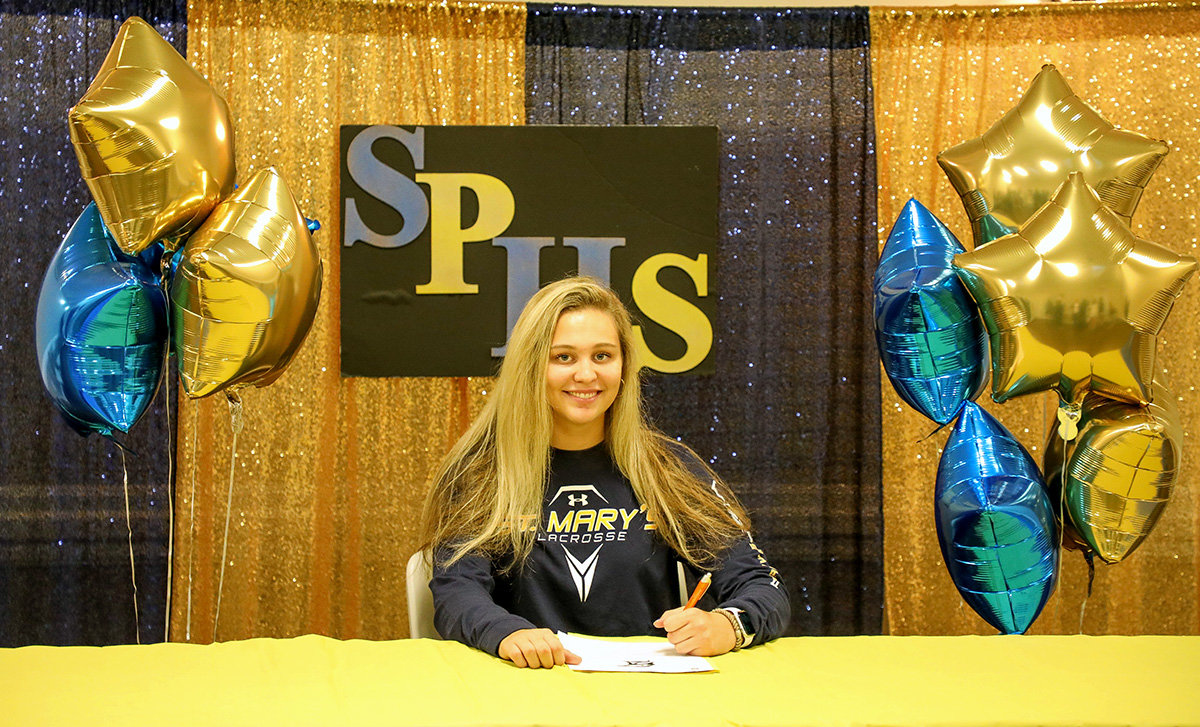 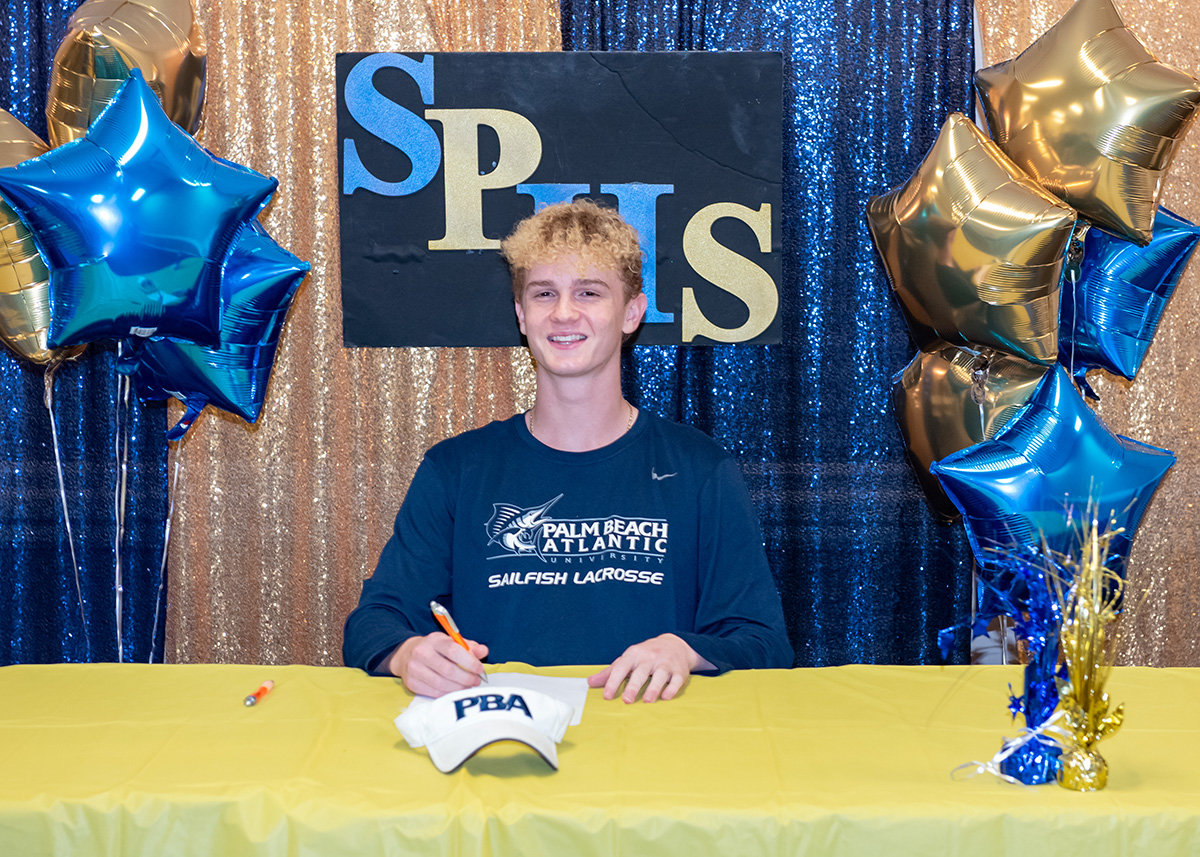 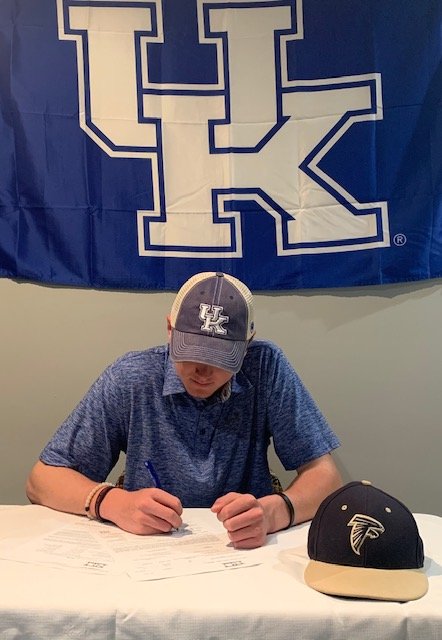 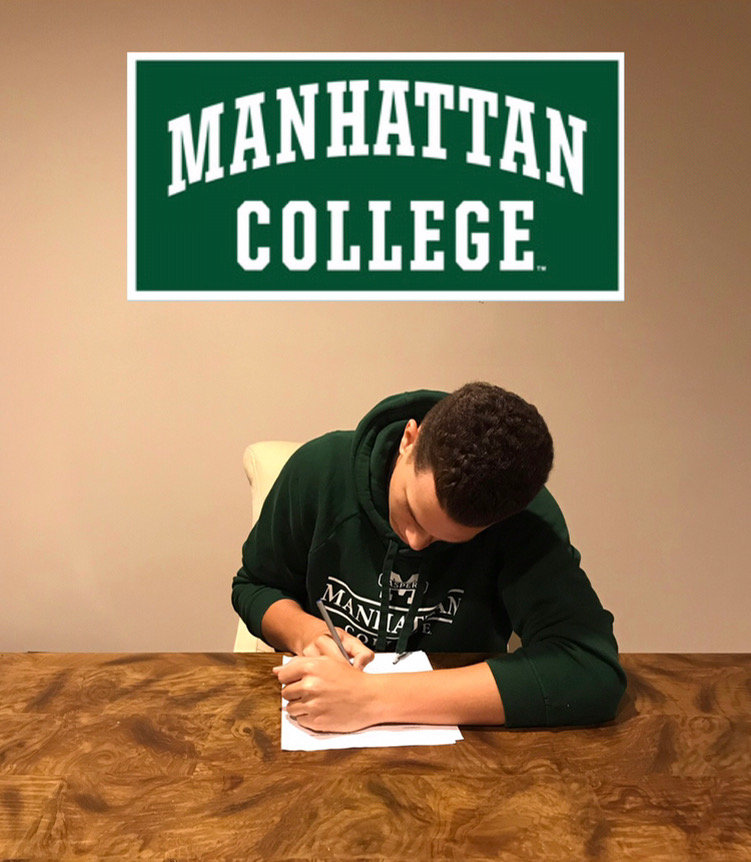 Severna Park High School athletes pledged to play collegiate sports at universities across the country when they signed letters of intent in November. Get to meet the student-athletes who are taking their athletic skills to the next level.

A senior at Severna Park High School, Nick Carparelli III is entering his fourth season on the Falcons basketball and baseball teams. As a pitcher, Carparelli expects to be a driving force for coach Eric Milton’s team as they look to return to the state championship game for the first time in three years. Carparelli chose Manhattan College because of the confidence that head coach Mike Cole had in his ability to pitch at the Division 1 level and the plan he laid out for him to achieve that goal. The location of the school in New York City will also provide Carparelli with countless opportunities to help prepare him for his career after graduation. He will pursue a communications degree and minor in journalism. Carparelli plans to use this degree to cover sports and to bring attention to the many stories of social injustice in this world in an effort to bring about positive change in society.

Jackson Merrill hopes to enjoy a fourth year playing shortstop for the Falcons. As a sophomore, Merrill batted .450 and was named First-Team All-County shortstop by the coaches and local publications. He has been named to postseason and preseason All-State teams by Prep Baseball Report and Maryland State Association of Baseball Coaches (MSABC). Over the past year, he has been named to all-tourney teams in national Perfect Game tournaments along with invitations to Pro Scout showcases. He is ranked in the top 10 for the class of 2021 in Maryland by Prep Baseball Report and considered the top Maryland shortstop by Perfect Game. Merrill chose the University of Kentucky because of the coaching staff and the chance to compete against the best collegiate talent in the nation. He plans on pursuing a degree in sports medicine.

Hailey Betch spent four years as an attacker for the Falcons. She made the varsity team during her freshman year and started ever since. She was a part of the 2019 state championship team. St. Mary’s was the best fit because of its great biology program and beautiful campus.

Reagan Clark spent three years as a midfielder/defender for the Falcons and was part of the state championship team in 2019. Clark chose UMBC because she wants to pursue the school’s medical program and continue her lacrosse career in-state.

Emersyn Kelter played lacrosse, basketball, unified tennis, and soccer for the Severna Park Falcons. She chose Stonehill College in Easton, Massachusetts, because of its rigorous biochemistry program, her desire to attend medical school, and because of the connection she made with coach Katie Conover and her future lacrosse teammates.

Carson Shoop spent three years as a defender for the Falcons and was a part of the state championship team in 2019. Shoop played for M&D Lacrosse for five years as well as the Brine national team for three years and chose to continue her lacrosse career at Campbell University in North Carolina. Shoop plans on majoring in biology and minoring in chemistry.

Kaila Stasulli spent four years as a defender/midfielder for the Falcons and was part of the 2019 state championship team. She also played four years of basketball for the Falcons as a point guard and was part of the 2020 regional championship team. She chose Jacksonville because of the great location, friendly atmosphere and competitive lacrosse program. Stasulli wants to study biology at JU and attend dentistry school after. She is currently an assistant coach for the Maryland United 2028 girls lacrosse team.

Barrett has been playing lacrosse since he was 5 years old. He is a two-way midfielder who prides himself on athleticism. Barrett chose Palm Beach Atlantic University in West Palm Beach, Florida, because of the team culture, academia and weather. He will pursue a career in sports medicine.

Charlie Evans is in his fourth year playing attack for the Falcons and was part of the state championship team in 2018, the same year he was the Coaches Award recipient. Evans chose Lynchburg due to the reputation of the program and coaching staff. He will pursue a business degree, and he was selected to receive the Founder's Scholarship because of his academic profile, and a positive involvement in service and leadership activities.

Kyle Griffith has been on the varsity lacrosse team all four years at Severna Park High School. He was a member of the state championship team in 2018 and a starter for the state championship team in 2019. He is hoping to have a chance to defend the state title in 2021. Griffith chose the United States Air Force Academy because he wanted the opportunity to go to a prestigious school while still being able to play lacrosse. He expects to study business.

Jack Guerrisi has been playing competitive lacrosse since the sixth grade and is now a senior at Severna Park High School. He started playing with Green Hornets in fourth grade with Rockfish during middle school, and now has been playing with the Peninsula Lacrosse Club (PLC) since freshman year. Guerrisi is looking forward to taking his skills to St. Augustine, Florida, where he will be playing for Flagler College. Flagler is going Division II this year, and Guerrisi is excited to be part of its inaugural season.

Colin Shadowens has started every game as the Falcon's faceoff specialist since freshman year. He earned back-to-back 4A state championship titles in 2018 and 2019, and he was named Capital Gazette First-Team All-County in 2019. Shadowens is also a standout football player and wrestler at SPHS. He chose Navy because he wants to serve his country as a commissioned officer and be part of the rich sports tradition of the Naval Academy. He is also excited about the opportunity to play in Navy-Marine Corps Memorial Stadium, which is close to home. He hopes to become a Navy or Marine Corps pilot.

Rory Sullivan has spent the last three years as a defenseman for the varsity Falcons, including two years on the 4A state championship team. Sullivan also achieved several personal accolades, making the Freestate Top 22 team, the NXT Baltimore All-Star team, Inside Lacrosse All-Star team and Nike Invitational 2021 Baltimore team. His main reason for choosing UMBC is to play lacrosse at a high-level program and to study economics.