Successful September Has Spalding Ranked No. 3 In Maryland 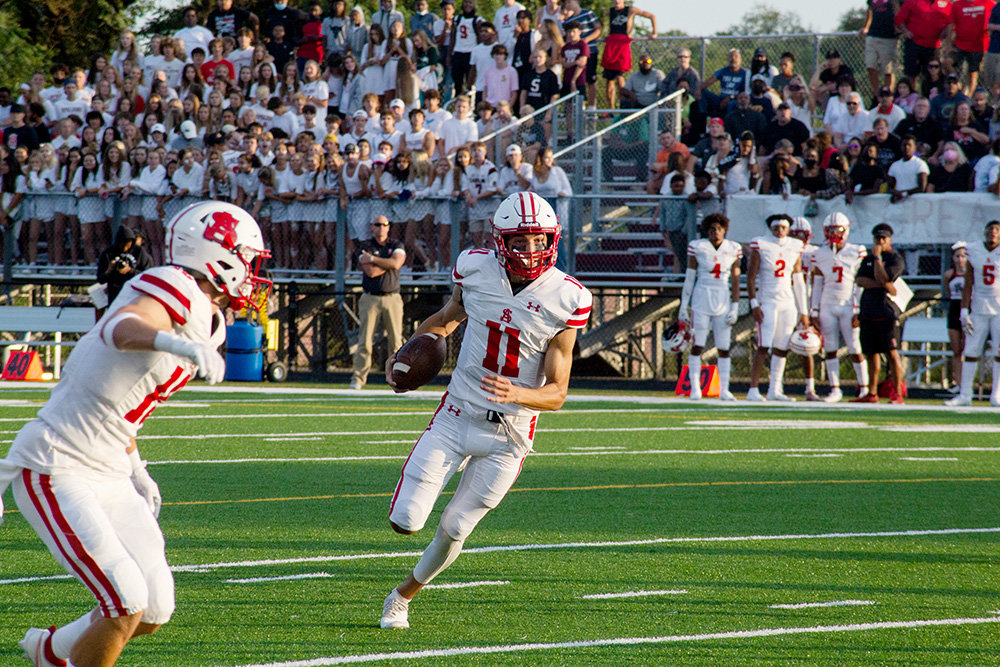 Nick Gutierrez, pictured in a game against Broadneck, has threatened defenses with both his arms and legs this season for the Cavaliers.
Photo by Maddy Fangio
Posted Wednesday, October 6, 2021 2:14 pm
By Kevin Murnane

Archbishop Spalding’s football team uses an axiom of mammoth offensive lineman and an athletic and fast back seven of linebackers and defensive backs to dominate its opponents.

The Cavaliers went undefeated in September with outstanding victories, including over Broadneck and Gonzaga, and outscored its opponents 161-26 during that month.

The success is multifaceted. Spalding has strong senior leadership, quick linebackers and defensive backs, and an offensive line whose weight averages close to 300 pounds.

Spalding’s September opened with Broadneck, which has state playoff aspirations. The two teams battled to a 14-13 score at halftime with the Cavaliers clinging to a one-point lead. The second half was controlled by Spalding as they used a crushing ground game to dominate the Bruins, scoring 30 unanswered points in the second half.

After the game, coach Kyle Schmitt gave credit to Spalding’s punishing offensive line. “They’re the heart and soul of our team,” Schmitt said. “Our size was able to wear them down in the second half.” Schmitt gave credit to Broadneck and especially quarterback Josh Ehrlich for his athleticism and ability to escape from the pocket.

The following week, Spalding used the same mantra of size and speed to shut out St. Vincent Pallotti of Laurel, 48-0. That home victory had a college atmosphere as there were about 50 players from the region’s youth football leagues standing on the sidelines for pregame warmups. Schmitt, who was a highly regarded offensive guard at Maryland during the Ralph Friedgen era, likes to invite as many youth teams as possible to the Severn campus to continue the influx of players who will compete in Spalding’s annually strong schedule.

“We’ve been fortunate to have players from all over the region come to Spalding,” Schmitt said. “The entire school recruits in every facet of the school’s academics, sports and the arts.”

After the Pallotti game, Schmitt again praised the back seven of the defense.

“By using our speed, we want to make the other team uncomfortable,” Schmitt said. In the Pallotti game, the Cavaliers’ defense smothered the Panthers, forcing an interception returned 68 yards for a pick-six. The defensive play was made by defensive back Lavain Scruggs, who has committed to Maryland.

Schmitt also went on to praise his offensive line, which controlled the line of scrimmage and did not let Pallotti have many opportunities on offense.

One of the main cogs of that formative offensive line is Severna Park native Jim Fitzgerald. The 6-foot-7, 315-pound athlete enjoys the physicality of Spalding’s offensive philosophy. “We want to dominate the line of scrimmage and beat the opposing linemen off of the ball,” said Fitzgerald.

Fitzgerald went to Severna Park High School his first year but visited Spalding and liked how the Cavaliers practiced and Schmitt’s background of being an offensive lineman.

“Coach Schmitt pushes us every day in practice and always stresses ‘master the mundane’ so that those repetitions help you in game situations,” Fitzgerald said.

Fitzgerald has numerous collegiate offers and colleges following him this year including University of Connecticut, University of Virginia, Penn State, NC State and Mississippi State, which he has traveled to this fall for a game. He plans on going into a ROTC program and becoming a Marine.

The next game on Spalding’s September schedule was at Archbishop Curley, and the Cavaliers shut out the Friars 49-0. The Cavaliers used a balanced attack and scored numerous touchdowns through the air.

That game came at an opportune part of their schedule because it enabled the Cavaliers to expand their offense as Spalding’s next game was against Washington annual powerhouse Gonzaga.

This game had an overflow crowd and was highly spirited from both sets of fans. Gonzaga was ranked fifth in the state by Max Preps and was trying to upset the then No. 2 ranked Cavaliers.

This game was filled with outstanding individual plays as quarterback Nick Gutierrez ran for multiple long-yardage gains and scored the winning touchdown in overtime.

The other great performance was by linebacker Kellan Wyatt, who made tackles from sideline to sideline and put pressure on Gonzaga’s quarterback.

After the game, Schmitt praised his coordinators, Tyrone Forty (defense) and Troy Gibson (offense). When asked about the big victory over a perennial Washington powerhouse, Schmitt fought back tears and said this was the best victory in his nine years of coaching at Spalding.

He singled out Gutierrez, who he called “a special player” and praised Wyatt as “the best defensive player in Maryland.”

Wyatt has committed to Maryland and Schmitt said he will play right away for the Terps. “Maryland is getting an incredible player,” Schmitt said.

The Cavaliers improved to 6-0 by defeating Calvert Hall 37-14 on October 1.

Schmitt is now focusing on the remaining part of the team’s 10-game docket and competing for the MIAA conference title. They have a formative schedule ahead with games against McDonogh, Gilman and Mount St. Joe.

Larry Sells Celebrates 20 Years As The Voice Of The Falcons