Cavaliers Follow With Win Over St. Mary’s Heading Into Playoffs 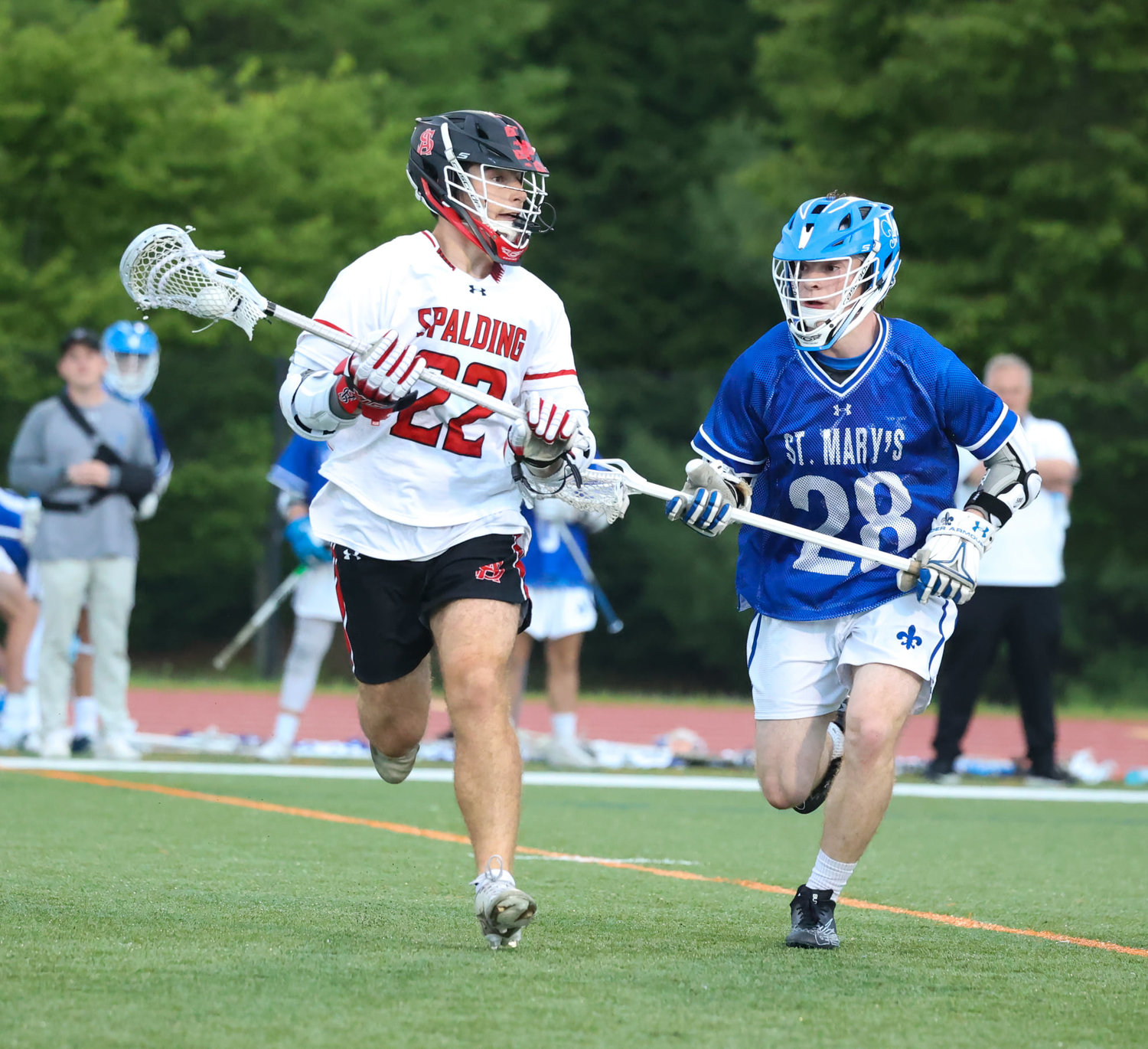 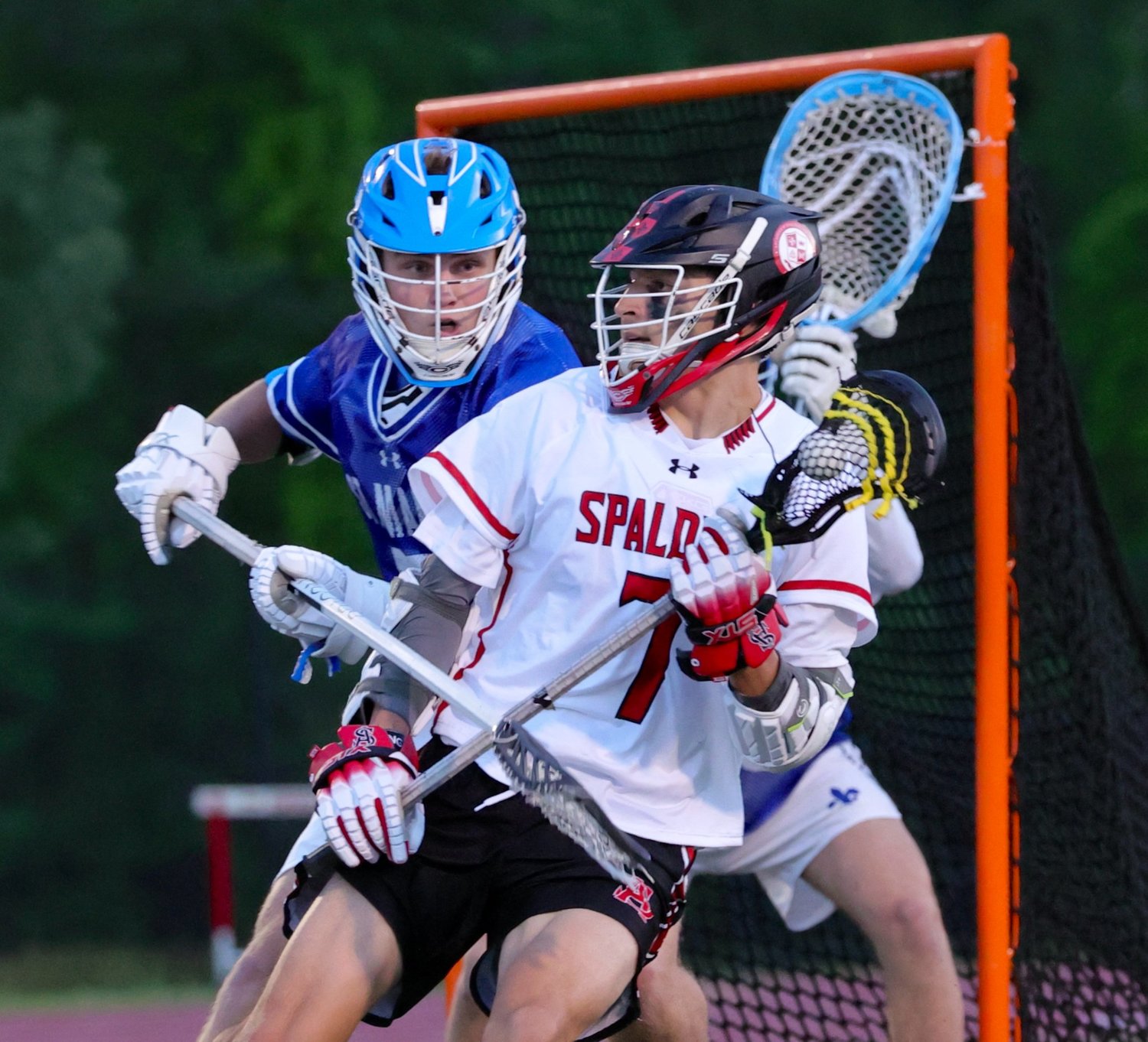 Midfielder Nick Gutierrez looked to score against St. Mary’s on May 5.
Photo courtesy of John Malamphy/Spalding Cavalier Club
Previous Next
Posted Monday, May 9, 2022 12:00 am
By Kevin Murnane

Heading into the second week of May, the Archbishop Spalding boys lacrosse squad was the fifth-ranked team in Maryland, and their game against Loyola Blakefield on April 29 provided a good demonstration of why the team is regarded so highly.

Spalding celebrated senior night with a 9-4 victory over Loyola. The game featured many outstanding high school players, but Spalding combined great defense, outstanding goalie play by Conor McMahon and a 70% faceoff win percentage by Blake Malamphy to win the contest.

The Cavaliers beat a tough Loyola team and the game was much closer than the final score indicated. Spalding broke the game open late in the fourth quarter by scoring three goals in less than two minutes.

“It was a grind-it-out win for us, but in this league, anyone can beat anyone,” said Spalding’s head coach Brian Phipps. “Credit Loyola for taking us out of our offensive flow but they have two outstanding defensemen.”

Those two defensemen are both 6-foot-3, over 200 pounds and agile. They are both five-star recruits. AJ Larking is going to Maryland and Bill Dwan is headed to Syracuse.

The perfect night for lacrosse began as Spalding introduced its 15 seniors, and every player will continue his playing career at various colleges throughout the region. Some of those players are headed to Maryland universities such as All-American Michael Weisshaar and Ryan Schrier to Towson; Nick Gutierrez and Connor McMahon to UMBC; Race Ripley and Jackson Roberts to Navy; and Blake Malamphy and Brenna Dennehy to Salisbury.

These seniors were instrumental in lifting Spalding’s lacrosse program to a new level over the last four years. The 2021 squad finished as the third-ranked team in the nation by USA Today.

Phipps acknowledged that the 2020 season could have achieved even a higher status if it wasn’t for the pandemic curtailing that season.

“We had 25 seniors on that team who continued their college careers,” said Phipps, who added, “That was a team that could have had great success.”

It is the consensus of the high school lacrosse community that the last four years have been the most prominent in Spalding’s history, and many of the current seniors have been four-year starters.

Phipps attributes their accomplishments to a change in culture and a complete buy-in to a team concept.

“This is my eighth season, and we try to recruit students for the Spalding academic and athletic experience,” Phipps said. “We have a great school with talented students within every facet of the school. For the lacrosse players, we offer them a chance to play at the highest level of competition in the region and get great exposure to college recruiters.”

Phipps is a Severn School graduate who went on to play at the University of Maryland and still plays professionally for the Whipsnakes in the Premier Lacrosse League.

Spalding followed the win over Loyola with a loss against Calvert Hall and then a win over St. Mary’s. The Cavaliers finished their regular season against Mount Saint Joseph on May 10, after the Severna Park Voice went to print. The MIAA quarterfinals are set to begin May 13, with semifinals on May 17 and the championships on May 20.

The MIAA tournament takes the top six teams, and Spalding lost a heartbreaking championship game to Boys Latin last year. This season’s Cavaliers hope to avenge that loss and erase that painful memory of last year.