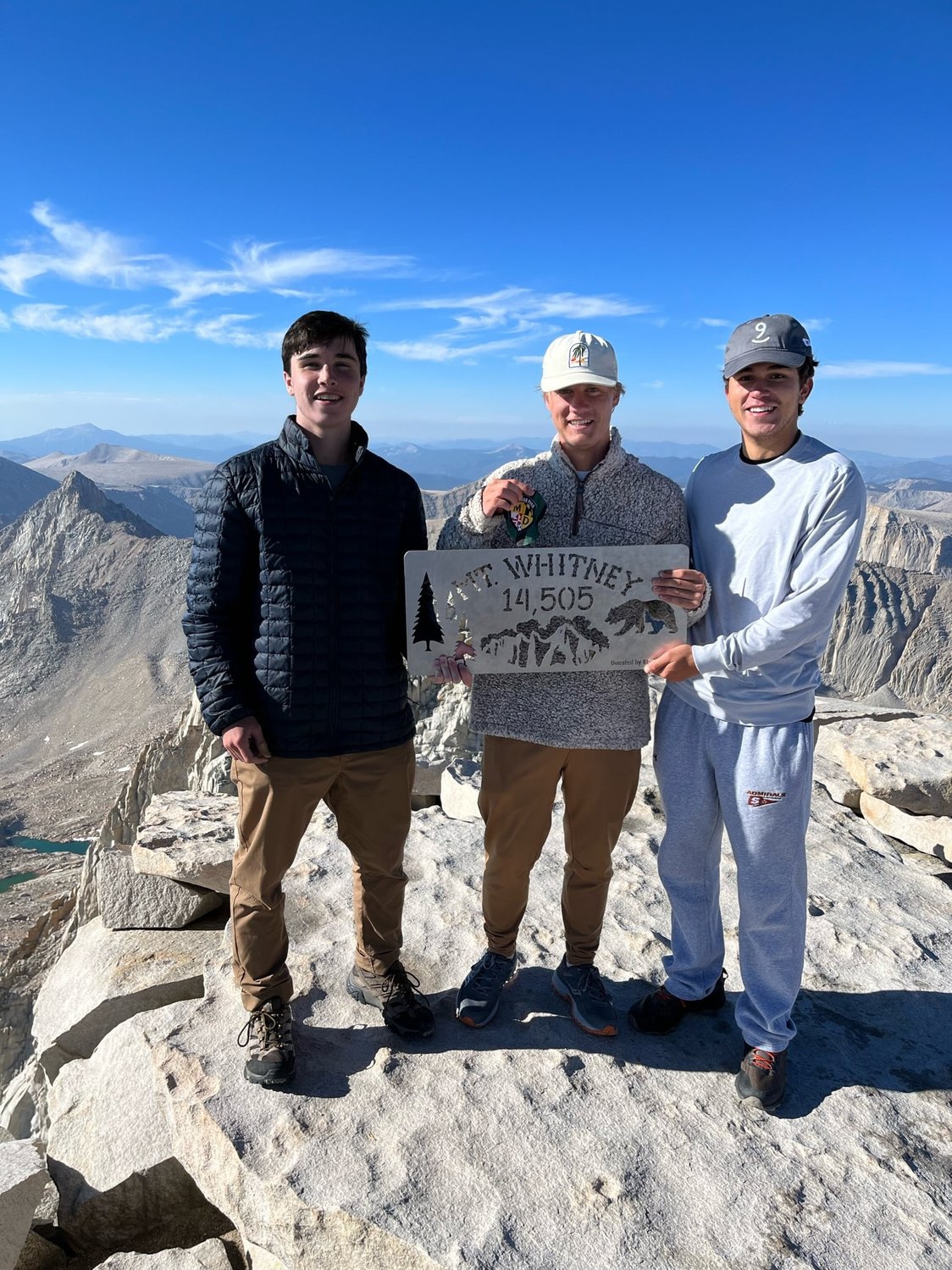 Three high school seniors from Severna Park and their fathers reached new heights this summer, literally, by summitting the tallest mountain in the contiguous U.S. — Mount Whitney in California.

Their two-day trek to the 14,505-foot peak was completed in late July.

When their dads recommended the trip, they accepted the challenge. The boys prepared the one way they knew how: running and playing soccer.

The group applied for a permit and arrived at the camp portal 8,300 feet above sea level on a Friday.

“The mountain was huge,” Cawlfield said. “We looked up and thought there was no way we would get there.”

They each carried between 30 and 40 pounds of supplies: hiking poles, clothes, GU packets, CLIF Bars. A three-liter container of water and iodine tablets to purify water. Blowup mattresses and tents.

Their first big obstacle came early into their ascent.

Cawlfield agreed, saying, “The switchbacks on the first day of the summit were probably a mile back and forth before we got to a ridge where we thought we were getting toward the top. Then it was another mile.”

The boys discussed sports and school as a distraction. Their next camp appeared at 12,000 feet. Grateful for a break from the exhausting hike, the group twice received another surprise.

“My dad and I were setting up a tent and beads of hail started beating down,” Muldoon said. “It’s interesting because it was hailing up there, but down below, there was no rain.”

“You can see the bios change,” Muldoon said. “It would start all grassy and then as we started to climb, we could see lakes and then it became rocks. Icecaps were melting down into deep-blue lakes. All the vegetation just seems to disappear in front of your eyes.”

By Sunday, the group was tired, adrenaline keeping them alert.

“After seeing a sign that says Mount Whitney summit, we realized it was still two miles, which seemed so far away that it was demoralizing, but we knew we were almost there,” Keefer said.

“Getting to the top is almost as much of a relief as it is joy,” Muldoon said.

Cawlfield said, “It was an awesome feeling of accomplishment, just to get to celebrate with everyone and finally getting cell service and being able to FaceTime my mom and show her the views.”

The boys and their dads all hugged and savored the views for about 45 minutes.

“Seeing the mountains and scenery, it was completely worth it,” Keefer said. “There was a sense of pride that we conquered it.”

Their last stop was at The Oasis of Death Valley, a hotel with a golf course 214 feet below sea level. Now home in Severna Park, all three teens said they would do another hike in the future, despite the obstacles.

“It was a great bonding experience that we will remember forever,” Keefer said.

Muldoon said, “It’s a feeling I won’t forget. It helps me see what I can do by pushing through when something is difficult.”

In addition to their memories forged on Mount Whitney, one other tangible reminder of their accomplishment still exists in California.

“At the summit, there was a book where we could sign our name and hometown,” Cawlfield said. “Being able to write Severna Park was awesome.”

Question Of The Month: Benfield Elementary

Educator Of The Month: Lori Pere