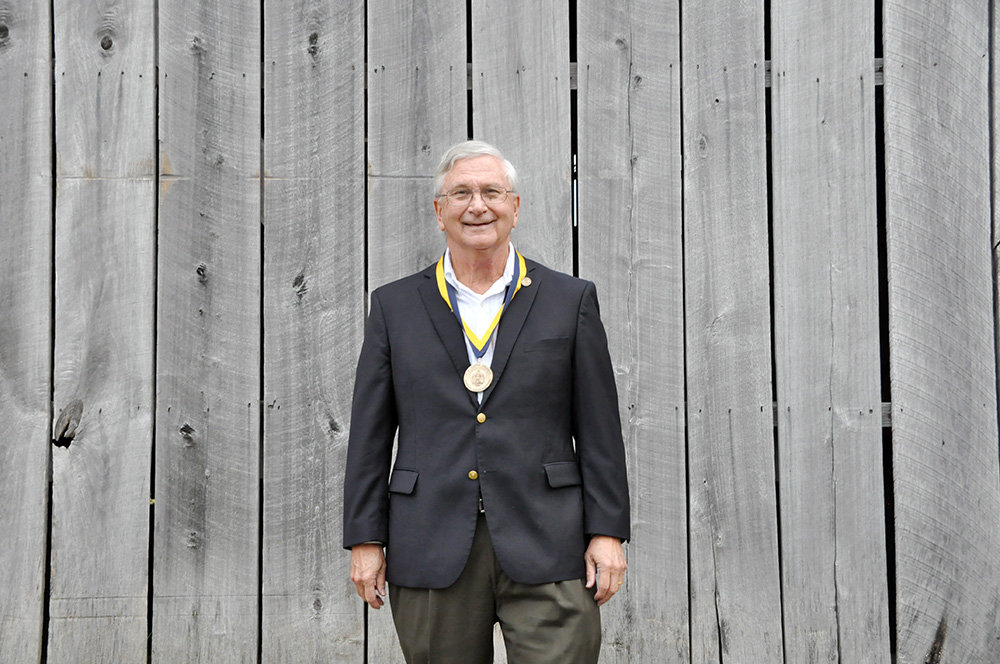 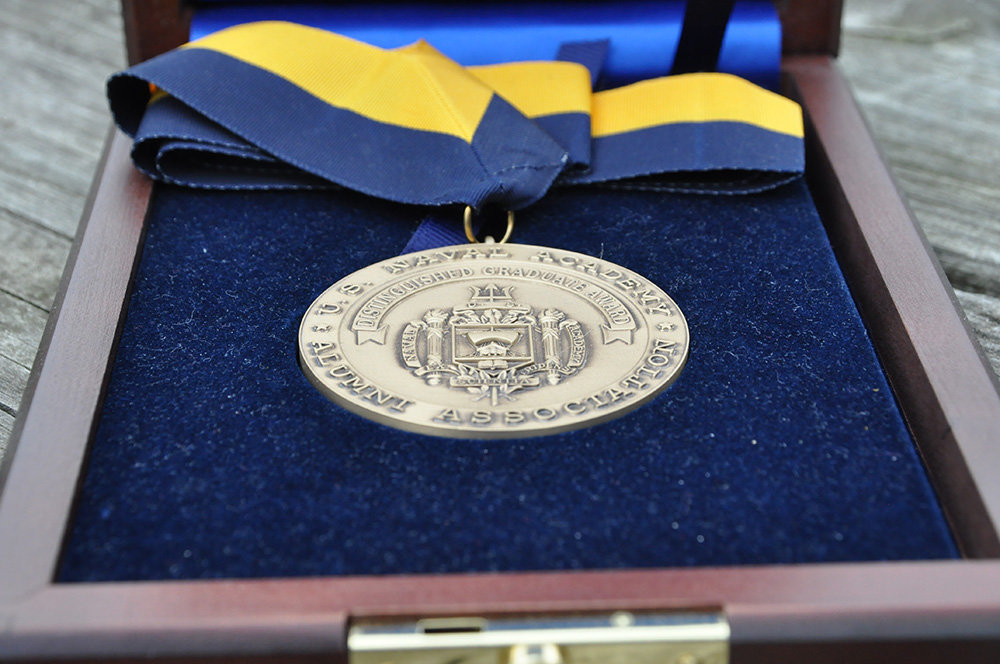 The Distinguished Graduate Award was established in 1998 to honor graduates who have demonstrated a lifetime commitment to service, personal character and distinguished contributions to the nation.
Photos by Mark Patton 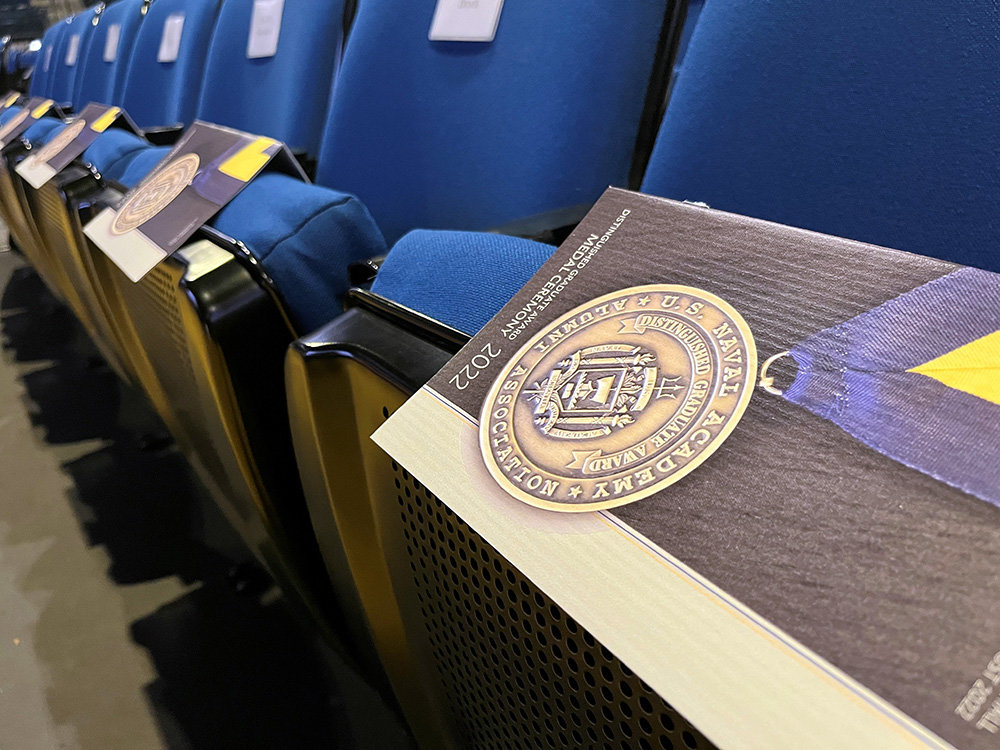 Chartwell resident Doug Crowder had to interrupt a budget meeting at the Pentagon where three of the Navy’s top officials at the time were convening. The day was September 11, 2001.

Crowder, then a Navy captain who had already been selected to receive his first star, had just watched the second plane fly into the Twin Towers on a TV in his office at the Department of Defense hub.

“CNO, you need to know this,” said Crowder to the senior military officer of the Navy at the time, Admiral Vern Clark, who was serving as the chief of naval operations.

Shortly after Crowder’s interruption, the officers felt the Boeing 757, operating as American Airlines Flight 77, crash into the west side of the Pentagon. In the hijacked plane’s immediate path was the Navy Command Center, where multiple Navy personnel were killed.

Crowder, who ultimately served 36 years in the Navy as a surface warfare officer and retired as a vice admiral, said the events of that day stressed the importance of not being complacent.

Almost 21 years after the terrorist attacks that shook the nation, the U.S. Naval Academy Alumni Association and Foundation honored Crowder and four others at the 24th annual Distinguished Graduate Award ceremony at the academy’s Alumni Hall.

Crowder first caught wind that he was being nominated for the Distinguished Graduate Award when he received a call from some Naval Academy classmates who informed him that they were advocating for him to receive the honor. They also told him that his class of 1974 had never had an officer selected for the distinction.

Despite Crowder’s humble reluctance about it, his classmates put together a packet to submit. That’s when a 6:00am text and subsequent call from one of the selection board members informed him that he had, in fact, been selected.

“I was very surprised, and I was very honored,” said Crowder, who remembered learning about it over the phone as his wife, Susan, walked in the couple’s den shortly afterward. “I’m not a crier, but I did cry.”

The Distinguished Graduate Award was established in 1998 to honor graduates who have demonstrated a lifetime commitment to service, personal character and distinguished contributions to the nation.

Crowder knew his crew had to go somewhere that September day in the Pentagon as smoke started filling the building following the plane’s impact.

“At first, we didn’t know exactly what the damage was,” Crowder said.

Once they were outside of the building, Crowder, who was serving as the executive assistant for the vice chief of naval operations at the time, got in a car and cut through Arlington National Cemetery, walked across it and hopped a stone wall to get to an annex there. He also was anxious to let his wife know that he was alright. He was unable to reach her due to signal outages.

As he finally made it back home around midnight, he was relieved to hear that someone had called Susan to let her know they saw her husband outside of the Pentagon.

It was a moment that changed the officer’s outlook as it emphasized the need to think about the third or fourth alternatives.

“There aren’t many people who thought some commercial airline would go through the Pentagon,” said Crowder, who noted there was no plan on how to react to a scenario like what had happened. “It also helped me to challenge kind of the conventional wisdom of whatever was going on or how a potential adversary might do it.”

Shortly after the attack on the Pentagon, Crowder directed operations to rebuild the command center and call up forces necessary to respond, mostly into the follow-on in Iraq.

Crowder’s success caught the attention of top Navy brass as he was appointed the director of Deep Blue, a position in which he served for two years starting early in 2002. Deep Blue was an operational think tank whose aim was to come up with innovative ways to react to the war on terror.

It wasn’t the first time, and it wasn’t the last, that Crowder’s leadership earned him accolades.

Long before Crowder donned any stars on his uniform, he was at the end of his five-year service commitment from his time at the Naval Academy. Crowder was weighing options on whether he would resign his commission or continue his career in the Navy.

He decided to wait to learn if he would be selected for the Olmsted Scholar program, which only affords the Navy a pair of slots each year for hopeful applicants. The program was established in 1959 to fund graduate-level studies for promising junior officers, and it requires Olmstead scholars to learn a foreign language, study at a foreign university for two years and live in the local community.

Luckily for the Navy, Crowder was granted a slot in the program and moved to Lausanne, Switzerland. It served as a seminal moment for the young officer.

“It was an incredible opportunity to learn that the United States doesn’t have all the answers,” said Crowder, who some 35 years later would serve as the chairman of the board of the Olmstead Foundation.

This experience served him well when he commanded American forces for tsunami relief operations after Indonesia was hit with destruction in 2004 shortly after Christmas. The tsunami struck at a time when there were no military-to-military relationships with Indonesia by law, according to Crowder.

When the call came, Crowder was commanding the Abraham Lincoln Carrier Strike Group in Hong Kong, and his crew was slated to leave a couple of days later for a major exercise in Korea. His boss at the time was Vice Admiral Jonathan Greenert, who commanded the Navy’s Seventh Fleet.

“He called and said, ‘I don’t know if the U.S. will get asked to help or not, but when you get underway, mosey on down that way in case they don’t need you, then you can get to this exercise in Korea,’” Crowder recalled, chuckling at the non-nautical term of movement that Greenert voiced.

By the next day, it was clear the devastation that was inflicted on Indonesia. Crowder then took off at 32 knots and headed south to assist.

Crowder recalled the best instruction he’s ever received in his storied Navy career from then Marine Lieutenant General Rusty Blackman.

“You head to Indonesia because I don’t know what you’re going to find, but here’s my command guidance … Go do good,” Crowder recalled Blackman saying.

While Crowder faced unchartered water in Indonesia as the country was in dire need of food, water and medical aid, the effects of his efforts are everlasting.

“We didn’t go there to improve relationships with Indonesia,” Crowder said. “We went there to assist the people who needed help.”

Two years later, Crowder and his crew’s efforts showed just how important their relief turned out to be as relationships were enhanced between the U.S. and the country with the world’s largest Muslim population. Just two years after the disaster, Crowder was invited to speak at Indonesia’s war college.

Following a stint as commander of the U.S. Seventh Fleet, Crowder went back to the Pentagon to serve as the deputy chief of Naval operations for operations plans and strategy. It was a full-circle moment as the vice admiral wrapped up his military career with the same organization that he started it with.

“I had a unique Navy career; I was either at sea or I was in D.C.,” quipped Crowder.

Crowder has been married almost 47 years to Susan, and they have three children and seven grandchildren.

“I put my family through a lot of moves,” Crowder said. “People forget the sacrifices the families go through.”

Following his Navy retirement, Crowder was the chief operating officer for a billion-dollar business unit for Boeing and later started a consultancy practice. He’s also penned a book about what it’s like to be shipmates in the Navy titled “Sea Stories: Humor & Life Lessons From a 40-Year Navy Journey,” and he’s currently wrapping up a second volume.

“I tell people about to retire, ‘You’ve been in the Navy X amount of years, it’s all in your head, every day you have millions of things going on. The good thing is when you retire, it kind of goes down to your heart, not so much of what you did, it’s your shipmates.’”

Crowder is mostly focused on family now as he limits his commitments to serving on advisory boards and nonprofits.

At his recent award ceremony, Crowder relished the opportunity to have his children and most of his grandchildren in attendance.

“That was emotional for me … I’m just dad and granddad to them, and that’s all I want to be to them,” Crowder said. “It’s almost like they’re seeing it for the first time, ‘You were also this Naval officer.’”

As for the best guidance Crowder received in his Navy career. That block has been checked.