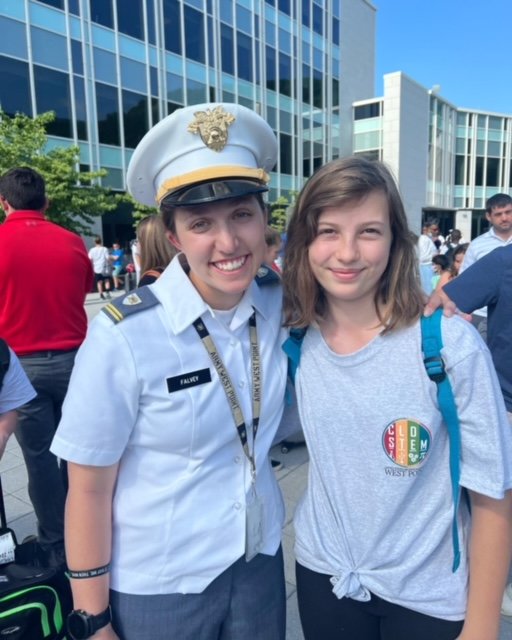 Ellie Brown met many cadets during her stay at West Point STEM Camp in June. 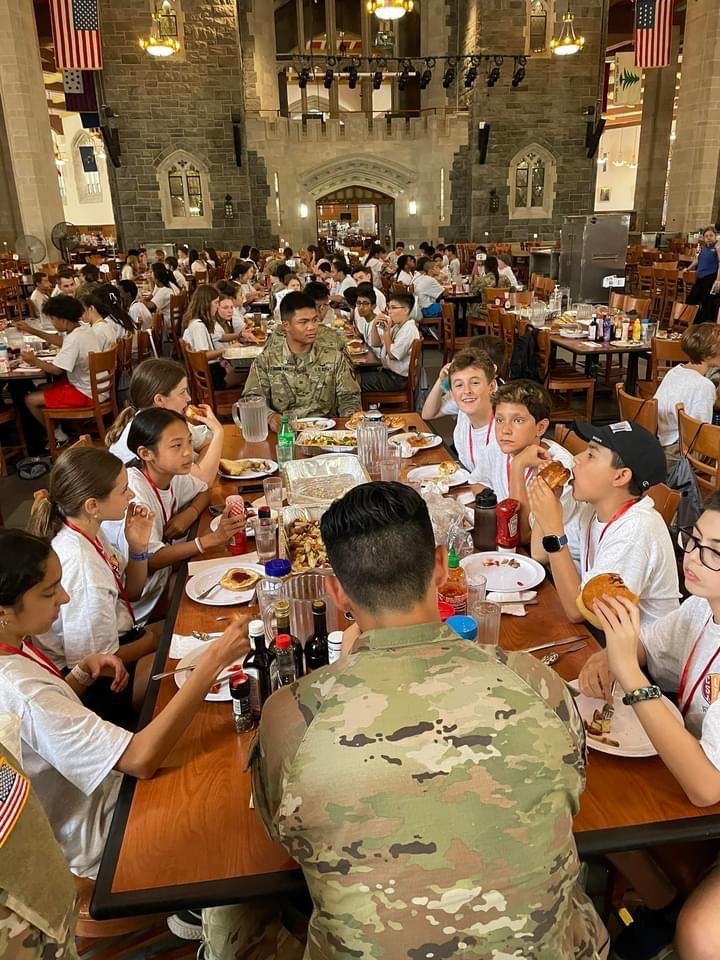 Campers were divided into squads of 12 kids each, led by West Point cadets. They ate in the family style mess hall, made formations before lunch and came up with squad calls.
Previous Next
Posted Wednesday, August 10, 2022 12:04 pm
By Sarah Sternhagen

Ellie Brown, a rising eighth-grader at Severna Park Middle School, attended the West Point STEM Camp that took place between June 14 and June 17. The camp, held on the West Point campus, allowed students from all over the country to learn and experience the different fields of STEM.

To apply to the camp, Ellie had to write a paragraph about her interest in STEM, a paragraph about why she wanted to go to the camp, and a recommendation letter, which she got from her teacher, Morgan Thompson. A total of 120 middle-school students were selected for the camp. On the first day of the sleepaway camp, Ellie and the others were immediately put into an activity parodying the “Amazing Race.”

“It was a scavenger hunt around the whole campus … you and your squad were racing to go around the campus and answer all these STEM questions,” Ellie said.

As the week progressed, the campers stayed in the West Point prep-school and were divided into squads of 12 kids each, led by West Point cadets. They experienced eating in the family style mess hall, making formations before lunch and coming up with squad calls. They finished the week by eating an Army-issued MRE (meal ready to eat). All activities happened on campus.

“I really liked the campus because it was right by the Hudson River. And when you get into that little place with all the major buildings, it feels like a whole little city,” Ellie said.

The squads were led to different modules for hands-on experience related to STEM. Each module was taught by professors from the academy or other officers specializing in STEM fields. The campers got to build pulleys out of Legos aiming to lift a weight. Campers also soldered circuit boards they’d programmed with games, worked in the robotics lab with a lovable robotic dog named Spot, coded video games, and designed their own race car and track. One of Ellie’s favorite parts of the camp was making a compact microscope made of folded paper, a foldscope.

“College students designed [the foldscope], and they’re super cheap and easy to make and easy to assemble, so they send them to other countries to diagnose diseases like malaria,” Ellie said.

The STEM camp was available to any kid in the country, and free as well. Because of such a great opportunity, the camp attracted kids from all around the country whom Ellie got to learn alongside during the week.

“Nobody knew anybody, so it wasn’t like there was all these groups of friends already. You just had to talk to people and make friends,” Ellie said. “You had to branch out, and it was a similar experience for everyone in that way.”

A big draw for the camp was giving kids an opportunity to see themselves one day working in STEM or a similar field. Ellie is interested in the medical field and attended a second three-day virtual summer camp offered by Uniformed Services University shortly after the West Point STEM Camp.

“I would like to go into the medical field when I’m older, and I think STEM is a big part of that,” Ellie said. “I learned a lot more about STEM [at the West Point Camp], of course. And had lots of new experiences, and got to see this school, and just another option for a path you can take in the future.”