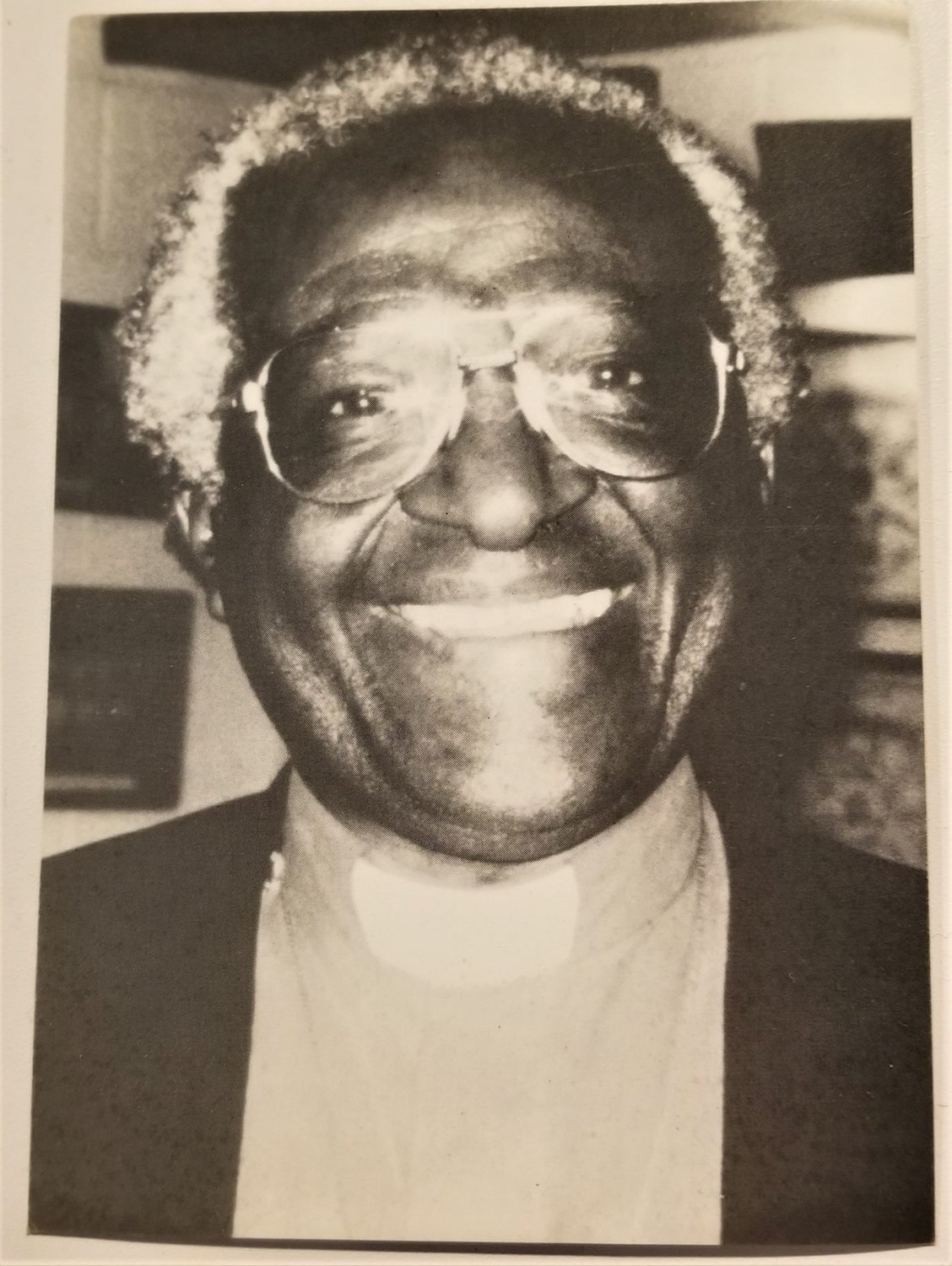 Heather Bobbitt has kept this postcard picture of Desmond Tutu taped in her kitchen every day since 1999. “His wonderful smile making me smile all the years since,” she said. 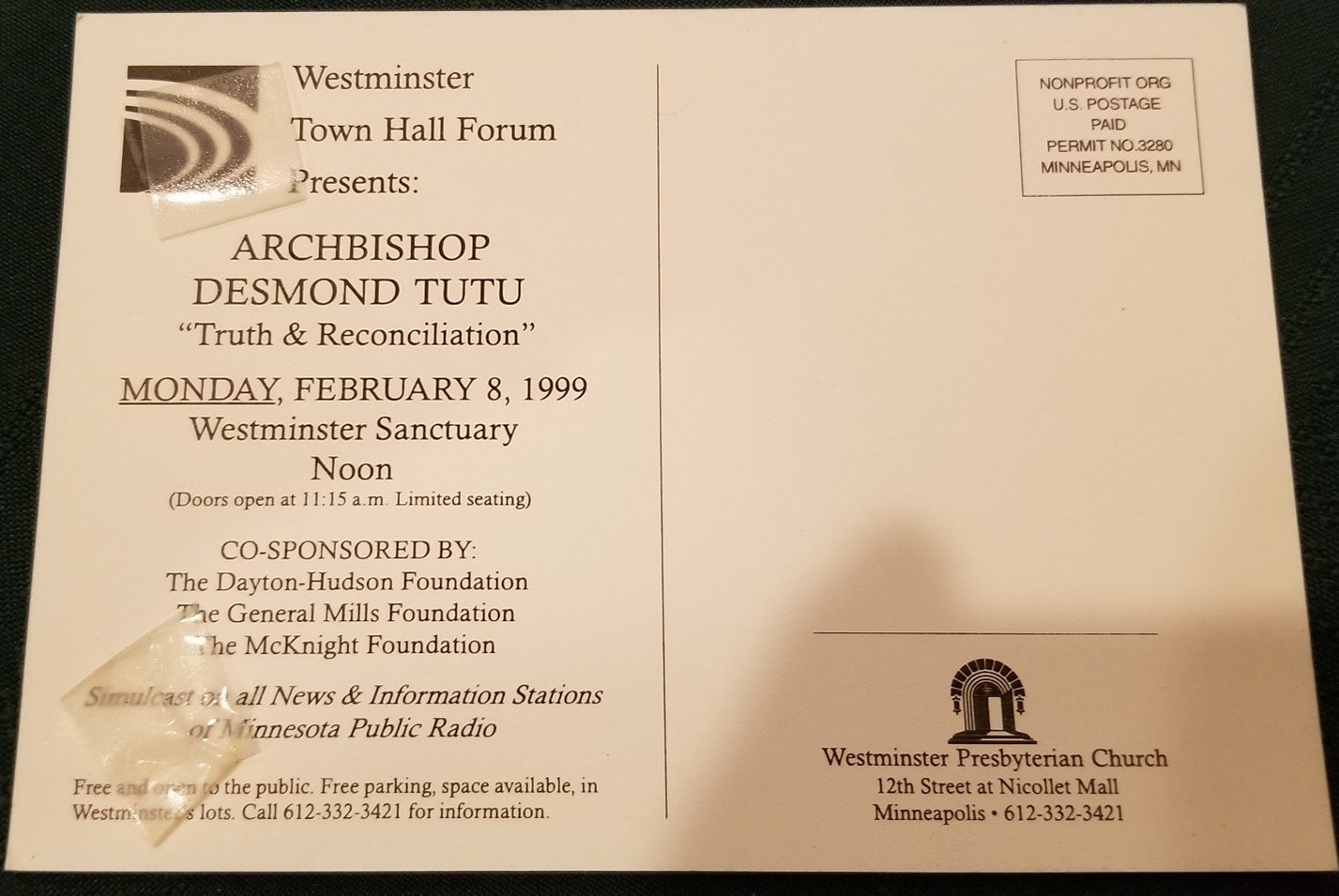 One day in the brutal Minnesota winter of 1999, I remember rushing through the snow to get into the sanctuary of a huge Presbyterian church in downtown Minneapolis to see Archbishop Desmond Tutu speak. I was a little bit late and the head of the local presbytery was already into his speech to introduce “the esteemed South African hero of the anti-Apartheid movement, the chair of the Truth and Reconciliation Commission, winner of the Nobel Prize,” etc., etc.

I was grateful the introduction was going on for a long time. It gave me a moment to stand at the side door into the sanctuary and peek to try to see where I could sneak in and grab a seat without being too disruptive. It was a packed house, too. Oh boy.

“Dang” I muttered to the man standing at that door. “Shall I just go in now?” I said to him.

He shook his head. “Wait for the applause — then go.”

The man seemed to me to be an older pastor, probably from Africa, judging by the accent. His attire was formal but not ceremonial. I thought he was one of the many pastors, like me, who had come to hear Tutu speak. I was glad I was not the only latecomer and assumed he would be going in with me to find a seat when the time was right.

We waited together, listening through a crack in the door to the general presbyter making a full speech just to introduce the real star. I rolled my eyes at my brother and said, “This guy is really being thorough, I guess.”

The older gentleman smiled and shrugged his shoulders.

Then he asked me, “Have you ever seen the archbishop speak?”

“No, just listened to him on the radio. But I can hardly wait to see him.”

Again, he shrugged and said, “I heard he is not all that…” And he shook his head and frowned to finish the sentence.

In a whisper, I exploded at the old man: “What are you talking about? Desmond Tutu is absolutely touched by God! He’s so important in history! The Truth and Reconciliation Commission could not have happened without him.”

I was so irritated by this negative Nelly, this Mr. Debbie Downer, raining on my parade.

It occurred to me that this fellow minister was teasing me. He was being playful, dissing the archbishop. I did not appreciate his levity. In my youthful righteousness and conviction, I could not restrain myself from defending one of our heroes of the faith!

“Sure, he could be a lousy speaker today. It happens to all of us sometimes. I don’t really care, though. Just to be in the same room with this holy man, see his face, hear his voice for a few minutes. That’s enough for me. He’s already given many wonderful speeches and done so much good in this broken world. I have prayed for him so many times for years. It makes me happy to just see him! And I bet he won't stink.”

Right then, the swell of applause happened, and the older man opened the door for me, saying, ‘Go, now, find a seat.” So I zoomed in and was met with a thousand sets of eyes looking right at me. I immediately just sat on the floor at the end of the first row — I could see there were no seats left at all. The eyes then all focused on the African-sounding pastor walking in behind me, smiling broadly and spryly walking right up to the pulpit. When he got there, he glanced at me for only a moment, and began. Thunderstruck, I was.

Overwhelmed with emotion, I sat there weeping silently the whole time. What a gullible midwestern hick I was and yet thrilled to death to have had a conversation with the archbishop Tutu! And to think, he tricked me into defending Tutu to Tutu. I was honored to have been fooled by such a great man. Hilarious in retrospect. And, it was an excellent speech, of course, with great humor throughout.

At the end when many people lined up to shake his hand, I did too but waited to be at the tail end. I shook his hand. I couldn’t think of anything to say except, “See, you didn’t stink at all.” And Archbishop Desmond Tutu laughed and hugged me.

Congratulations To The Best Of Winners