Not Your Average Debate: District 5 Candidates Square Off On God, Government And Evolution 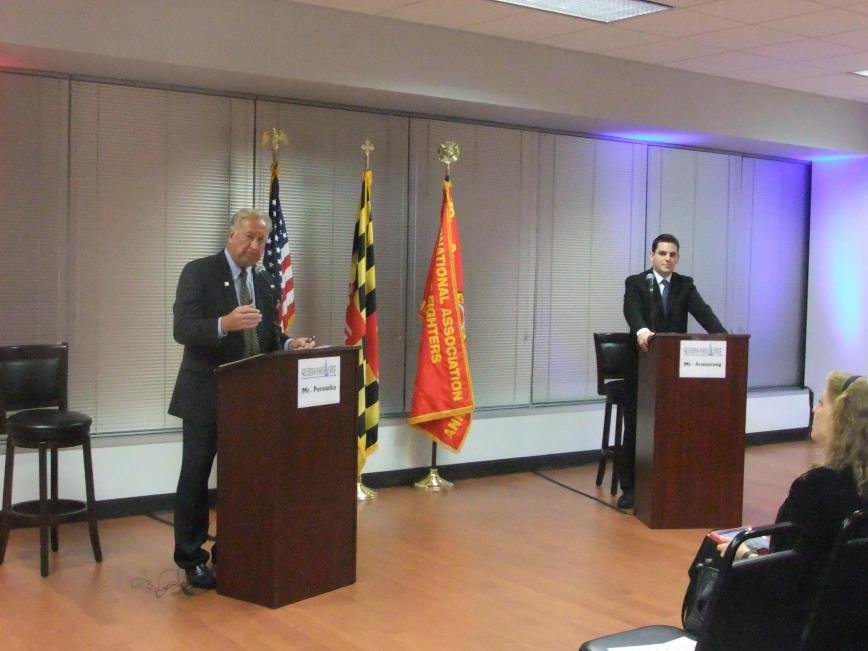 Privatization of the fire department, the constitutionality of the Department of Education, secession, evolution, the Communist Manifesto and primordial ooze  – those were just a few of the topics raised during Thursday’s debate between Republican Michael Anthony Peroutka and Democrat Patrick Armstrong.

If you're just tuning in, welcome to the District 5 council race. You may have some catching up to do.

Fortunately for the uninitiated, the two-hour, 38-question forum, which was hosted by Anne Arundel County Professional Firefighters and moderated by Severna Park Voice Vice President of Sales & Development Larry Sells, offered an insightful snapshot of where both candidates stand on county issues - and, incidentally, many other issues as well.

Throughout the evening, Peroutka, a cofounder of the Institute on the Constitution and an attorney who ran for president in 2004 as the Constitution Party nominee, threw out the traditional playbook for political debates, spurring public policy specifics in favor of existential assertions on the role of government while peppering in a steady dose of historical and biblical references to illustrate his philosophies.

Armstrong, a young Democrat who attended Anne Arundel County Public Schools and AACC before graduating from Salisbury, countered with a traditional refrain of low taxes and support for public safety and schools, while painting himself as the mainstream candidate in a district that has not elected a Democrat in nearly three decades.

The debate vacillated in tone from congenial to testy to surreal. No moment better captured the tone of the evening or better exemplified the stark contrast between candidates more than their responses to a seemingly mundane question posed a half-hour into the debate, which asked the candidates if they supported a growing movement to delay daily start times at Anne Arundel County Public Schools. Armstrong said he supported the idea, pointing to studies showing that young people learn more effectively later in the morning, and calling it a health issue and an education issue.

Peroutka, who had mostly offered only qualified responses to the questions up to that point, channeled William Jennings Bryan as he delivered an impassioned soliloquy on evolution, God and the public school system:

“Our children are taught that their great-great-granddaddy was a hunk of primordial ooze in a pond somewhere and that their granddaddy was a slimy eely thing that finally grew legs after a million years and their daddy was a monkey, and then – what are they? They’re like the son of a monkey,” Peroutka said. “And what’s funny is then they try to teach the kids self-esteem; what they just taught the kid was he’s a mass of mutations and mistakes. So, what time they begin doing that in the morning is really not important.”

Peroutka railed against the current state of public schools throughout the evening, and, to summarize, his view of education looks like this: God’s law is the “fundamental underpinning of all education,” and parents, not governments, should determine the curriculum. Public schools – which Peroutka often referred to as “government schools” – have abandoned those principles over time, turning them into “indoctrination centers” rather than sources of education. To remedy this situation, the schools must be reinvigorated “with the truth of the Bible.”

Finally, according to Peroutka, “free public education is the 10th plank in the Communist Manifesto. We’ve accepted a system that is socialist in its nature.”

If you’re wondering how to reconcile Bible study in schools with the Constitution’s Establishment Clause, Peroutka covered that, too: “The First Amendment is not about protecting Muhammadism or Islam. It has to do with the different denominations of Christianity. In other words, when they said ‘Congress shall make no law respecting the establishment of religion,’ it had to do with different denominations of Christianity.”

As you’ve likely surmised by now, most of the highlights of the evening belonged to Peroutka, whose comments drew the occasional “amen!” from supporters and gasps or scoffs from the opposition, such as when he denied the legitimacy of any government statute or institution that falls outside the spectrum of God’s law.

“We shouldn’t just accept ink that’s spilled on paper by the legislature and say, ‘Well, that’s law’ … You don’t have to accept anything the legislature says as law. When it violates God’s law, it’s not law.” Peroutka said. “It might look like law and smell like law, you might be punished for not obeying it, but folks, that’s what nullification and interposition and secession are all about.”

Armstrong seldom addressed Peroutka’s statements head-on, choosing instead to stick to talking points on policy, but in his closing statement, Peroutka went after his opponents’ views by focusing not on their validity but on their relevance.

“Four years of my opponent will lead to four years of grandstanding on issues that frankly have little to do with county government. County government isn’t about gun control or evolution versus creationism, or pro-life versus pro-choice, or Obamacare,” Armstrong said. “Those are all battles that take place at the state level or the federal level. We’re talking about the county council here.”

Armstrong also attacked Peroutka for his membership in the League of the South, a Southern Nationalist organization that has generated headlines for highway billboards that read, simply, “SECEDE.”

“This is an organization that has said on their website that their stated goal is to create a Southern, white republic,” Armstrong said. “It’s also an organization whose members have advocated such things as creating guerrilla warfare against politicians and whose members have said any number of offensive things that you can find right on their own website … it’s the company you keep that’s troubling.”

Armstrong’s own message centered on support for the police and fire departments and increased investment in county schools. He proposed higher salaries for teachers and public safety officials in order to better compete with the neighboring jurisdictions for talent, and pledged to secure funding to complete school construction projects at Severna Park High School and Benfield Elementary and get started on a new Arnold Elementary School. He also presented a more moderate agenda than the typical Democratic candidate: Armstrong pledged to impose no new taxes or fees and voiced his support for an elected school board (as did Peroutka).

The two candidates presented diametrically opposed views on several issues throughout the debate besides education. On the issue of Common Core implementation, the candidates were asked whether the county should provide additional funding and resources to help teachers and students adjust to the standards. Peroutka said he would categorically oppose any aspect of Common Core implantation.

“I believe Common Core is part of the dumbing down of America’s children,” Peroutka said, lumping Common Core in with Goals 2000 and No Child Left Behind, two similar programs from the Clinton and George W. Bush administrations, respectively. “I would resist Common Core with every fiber of my being.”

Armstrong said that he understood many of the criticisms of Common Core, but from a local perspective, he supports giving schools additional tools to ease the transition.

“I think there are pros and cons on both sides [of the Common Core debate], but as far as whether or not we need to implement it correctly – yes, we do. It’s worth the investment for us to allow students and teachers to gradually adopt these standards, rather than just throwing it on them and expecting them to adopt it on their own.

The candidates offered opposing viewpoints to questions about bay restoration and stormwater management. As he did with the Common Core question, Armstrong discussed the issue from a local perspective, noting that changes to stormwater laws must occur at the state and federal levels; as a councilman, his job would be to focus on using his role to secure whatever funding he could to protect waterways in District 5.

Similarly, Peroutka again attacked the legitimacy of the laws themselves and said that based on the nation’s founding documents, the Environmental Protection Agency has no true authority to impose regulations.

“I believe we should clean up the bay, and I believe we should take precaution to keep it from getting dirty … however, the bay doesn’t belong to the EPA. The EPA doesn’t even technically legally exist … since it is an agency that is not even legal under the U.S. Constitution. Being on its endangered list is really just part of a big – in my view – a big scam,” he said. In his response to a similar question, Peroutka also added, “I believe if the bay was going to get cleaned up by money, it would have been cleaned up by now … it should be green by now because we’ve been putting so much money in it.”

When the candidates were asked whether they would support a shift toward privatizing the fire department – a stance that has been associated with Peroutka’s campaign – Armstrong vocally opposed the idea.

“I believe [privatization] is a very dangerous way for us to go about providing public safety … You have to think about who’s coming to your door. If your house is on fire, do you want someone who works for a corporation whose ultimate goal is to cut costs to raise a profit? Or do you want someone who is accountable to the people?”

Peroutka was noncommittal in his response, saying he would have to study the issue further before deciding whether privatization would be the right course of action, but in general, it appeared to align with overall philosophy on public policy.

“I would think that everything that can be legitimately, carefully privatized probably should be,” Peroutka said.

In his closing statement, Peroutka took issue with how his views have been portrayed by his opponent and by the media.

“Some have declared my ideas and principles to be extreme, but they are not extreme,” Peroutka said. “They are the bedrock principles of our founding. They are our heritage.”

Indeed, “extreme” is not an accurate description for Peroutka’s philosophy, as the term implies being on the far end of a spectrum. Many of Peroutka's views do not fall upon the linear political plain of left vs. right, conservative vs. liberal, but rather, on an entirely different axis – a fact not lost on his opponent.

“In all honesty, I am more of a Republican than Michael Peroutka is,” Armstrong declared in his closing statement, also noting that Republican gubernatorial nominee Larry Hogan and county executive candidate Steve Schuh have disavowed the Peroutka campaign.

In a contest between such starkly different candidates, undecided voters may be a purely theoretical demographic, but each candidate succeeded in getting his message out during Thursday’s debate.

The conservative radio program Red Maryland will re-air the debate in its entirety on Saturday evening at 8:00pm. To tune in, visit www.blogtalkradio.com/redmaryland.

Blessing Of The Animals Coming To Woods Church