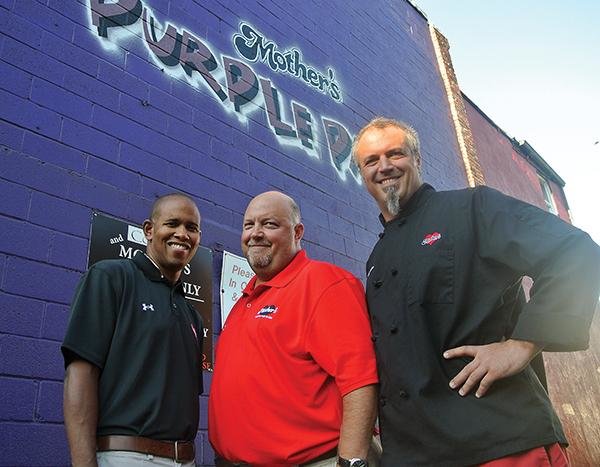 Baltimore’s landmark sports bar, Mother’s Federal Hill Grille, recently opened new location on Ritchie Highway in Arnold, bringing award-winning food and an electric game-day atmosphere along with it. The move marks the first effort to expand the Mother’s brand by Pasadena resident and co-owner Dave Rather, who scouted all over the region searching for the perfect landing spot for his second location.

“We’ve been thinking about (a second location) for a while. We thought our brand could expand well to the county and felt like the timing was right,” explained Rather. “I live in Pasadena so I’m on Route 2 a lot. I have a lot of friends in Severna Park and everybody was basically begging for a new place.”

Rather and his brother Adam opened Mother’s in Federal Hill on New Year’s Eve in 1997, later adding Dave’s wife, Kelly, as a co-owner as well. With Adam working as the head chef and Dave running the marketing, the brothers have grown their restaurant into a nationally recognized brand and an iconic regional hangout.

“It’s been more successful than my wildest dreams. I attribute it to riding an elephant and just trying to stay on,” said Dave. “It’s been incredible, and we feel very blessed and fortunate.”

The downtown hotspot becomes a beehive of activity on Sundays in the fall with its Purple Patio, when its parking lot plays host to thousands of Ravens fans before, during and after games. Despite the throngs of patrons who gather to eat, drink and cheer, the staff at Mother’s coolly navigates the revelry to provide excellent service.

“One of the things that that makes me very proud is the level of staff that we have and the commitment and the efficiency with which they work on crazy days. Recently, for example, we had the first week of NFL games, the Yankees in town and a marathon going on, and they handled it beautifully.”

Mother’s has been highlighted by the Food Network and featured on The Today Show for its signature “Heart Attack on a Plate” burger. It was named one of the top 25 sports bars in the nation by the Sporting News, and has received a number of local awards for both its food and atmosphere. But for Rather, one of the greatest rewards is seeing the profound impact Mother’s has had on the lives of the people who walk through the door.

“A lot of customers have met their husband or wife here, or gotten engaged here. Some of our staff has gotten married because they met here and now they have children,” Rather noted. “It’s pretty cool to see the effects that Mother’s has had, and we really enjoy it. We’ve had mayors and governors in here, Ravens and Orioles, you name it.”

The list of famous names that have turned up at Mother’s over the years is extensive. A plethora of local football stars, including legends such as Ray Lewis and Art Donovan, have come through. Albert Belle was a regular after Orioles games. Even Roger Clemens, Derek Jeter and Tino Martinez once stopped in for a postgame meal. Governor Martin O’Malley and his staff celebrated his election victory at Mother’s, and Under Armour CEO and Founder Kevin Plank has been a familiar face in the restaurant throughout the years.

“When Under Armour had like five employees they’d come in for lunch every day, and they’ve stayed with us as they’ve blossomed into this incredible company,” Rather noted. “They still do a lot of events here and bring in the different athletes they sponsor. It makes us proud to be from Baltimore and be connected with a company like that.”

If the downtown success is any indication of what is in store for the Arnold location, Anne Arundel County may soon have a landmark sports bar of its own. So far, things are off to a promising start at the 6,600-square-foot location, which formerly housed Griffin’s Grill.

The building features 25 TVs for sports, and Mother’s hosts live music three or four nights per week. Like its Federal Hill location, the restaurant offers lunch and dinner throughout the week for eat-in, carryout or delivery, and they also serve breakfast on weekends.

“It’s really looking great. We’ve completely renovated the building so it will be a lot more open and airy,” said Rather. “It’s a great place to watch football.”

The Year Of The Rabbit