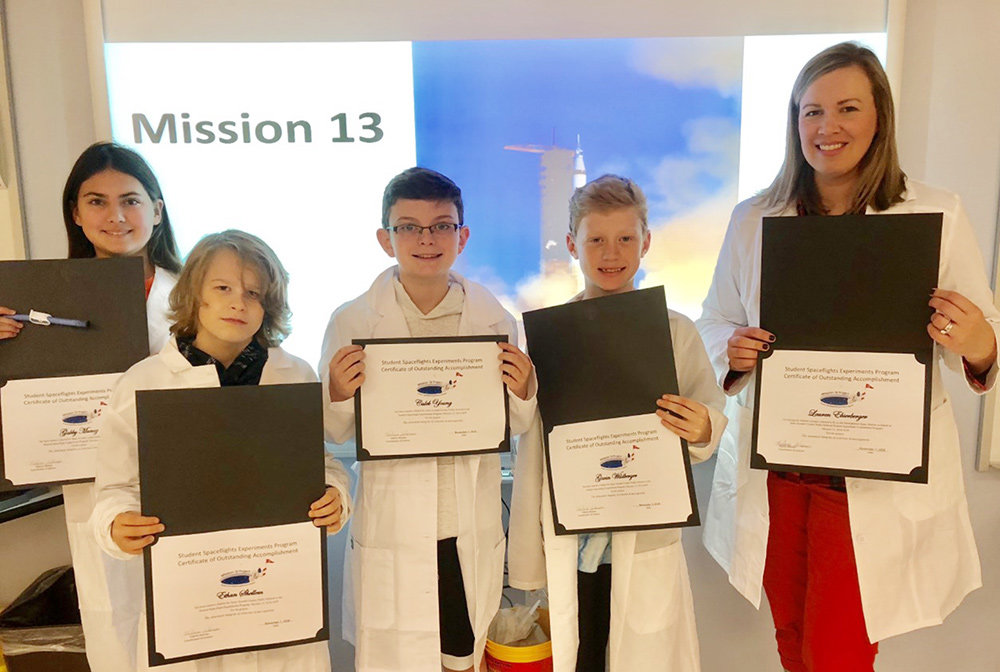 MRMS sixth-graders Caleb Young, Ethan Shellem, Gavin Wildberger and Gabby Munoz created a project that will be sent into space in July.
Photo Provided
Posted Thursday, June 27, 2019 9:12 am
Hear From The Students Involved

“This topic is important to me because if the concrete does harden, it will help us recognize that we are able to build things in space. When I grow up, I would like to do something with engineering, and this project has helped me communicate with others and brainstorm ideas and designs.” – Caleb Young, 12

“It’s important because maybe in the future we could have a city or houses on the moon made of concrete. I have always loved space and wanted to go into space, so knowing that our group’s project is going into space is exciting.” – Ethan Shellem, 12

“It felt great to win, and I am humbled by it all. Space has always interested me. I am not interested in a job in space, but it will help prepare me for working in groups with unfamiliar people to solve a problem.” – Gavin Wildberger, 12

“It was great to know that I accomplished something that might help future scientists. I would like to get a career in being an astrophysicist. This project has taught me a lot about the workings in space and how there is little gravity and how everything links together in our solar system.” – Gabby Munoz, 12

In July, a project created by four Magothy River Middle School sixth-graders will be sent into space and tested by astronauts.

Caleb Young, Ethan Shellem, Gavin Wildberger and Gabby Munoz designed an experiment that tests the effects of microgravity on concrete.

“It is important to explore the different materials that we could use to colonize or build on moons or planets,” Gabby said.

As part of the sixth-grade curriculum, students participated in Mission 13 during the unit on space. Mission 13 is run by the Student Spaceflight Experiments program through the National Center for Earth and Space Science Education.

Students broke into groups to create proposals of projects they wanted to test in space, and after a series of stages, one proposal was chosen. MRMS students beat five schools in the county.

“I thought it would be a very cool opportunity for our students. Very real-world,” said Lauren Ebersberger, a sixth-grade teacher at MRMS. “I was really impressed with a lot of the projects that were submitted.”

This was the first year that MRMS participated in the competition, and Ebersberger said she wanted to provide the opportunity to students to open their eyes to different careers.

“It opens up their eyes that, ‘Oh, we’re just students, but we’re going to be a part of something much, much bigger,’” Ebersberger said. “It definitely taps into the STEM. We are not a STEM school, but it helps promote that.”

The four students have been working on this project on a weekly basis all school year. After school let out for the summer, they returned to MRMS for a video conference to learn how to pack their project to prepare it for the space launch.

“They all have different personalities, and I think that helped when they had to come up with ideas and designing,” Ebersberger said. “They were very positive throughout the entire experience.”

A conference on July 1 and July 2 will bring together all of the winners from around the world to showcase their projects. Gabby will represent MRMS at the conference. The launch is tentatively set for July 18, and it will be streamed online for people to watch.

From Folger To SPHS, Students Grow With Earth Day Festival

Read Between the Wines

Unity by the Bay | Annapolis, M