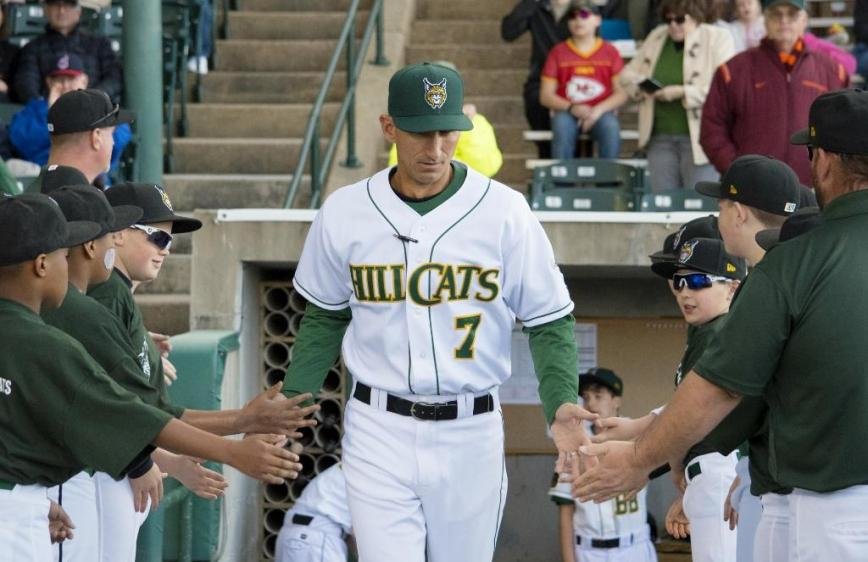 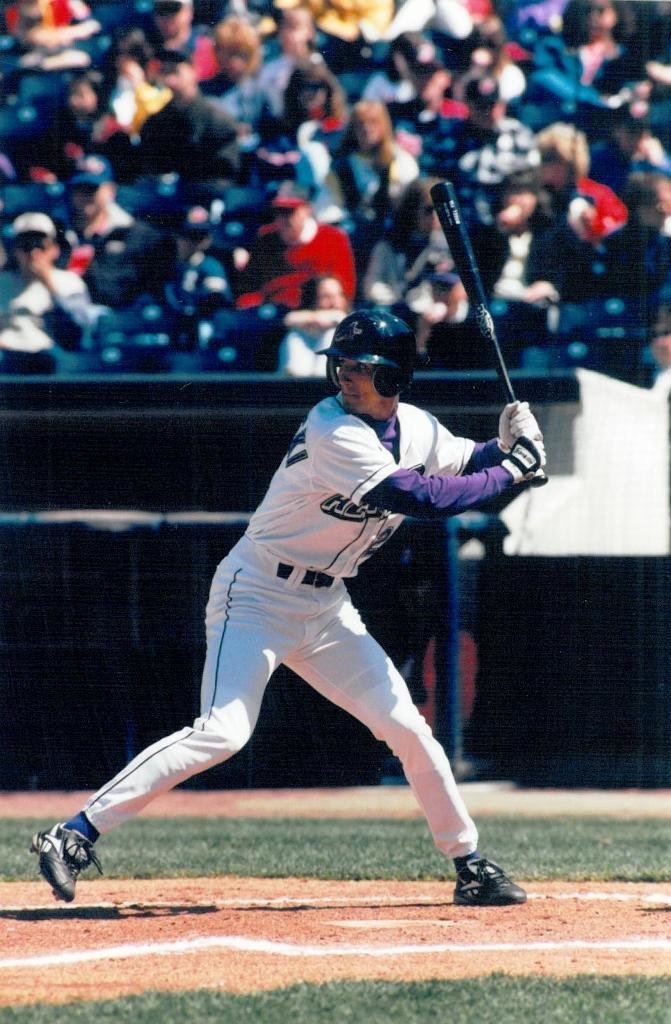 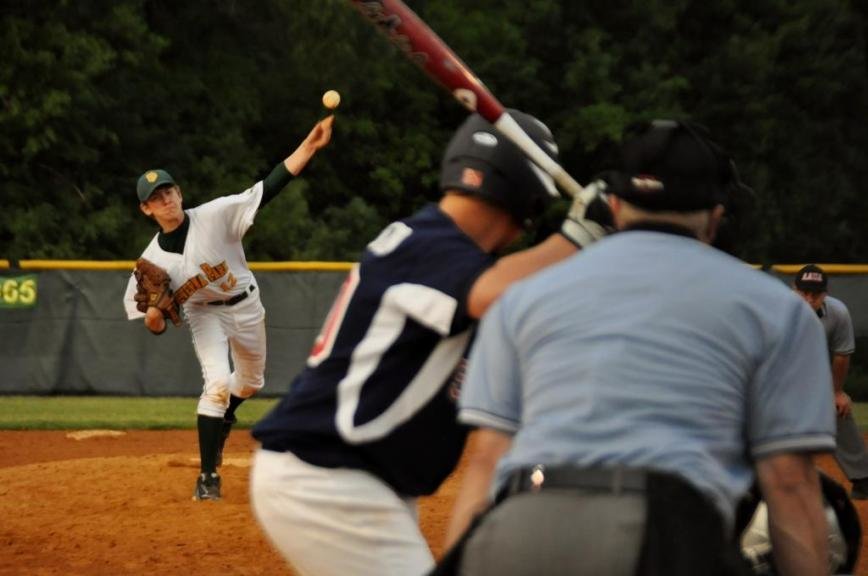 Pitcher Tyler Blohm is the newest baseball phenom to come up through the Green Hornets system. 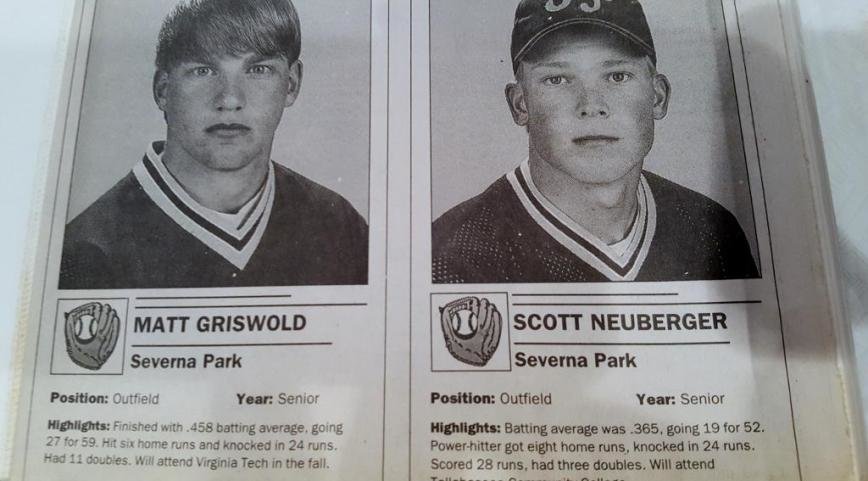 Matt Griswold and Scott Neuberger came up through the Green Hornets system together and became well-rounded outfielders with Severna Park High School.

Mark Budzinksi spent most of his professional career in the minor leagues. He now coaches minor leaguers, with an emphasis on consistency.
Photo courtesy of Whitney Holmes/Lynchburg Wildcats 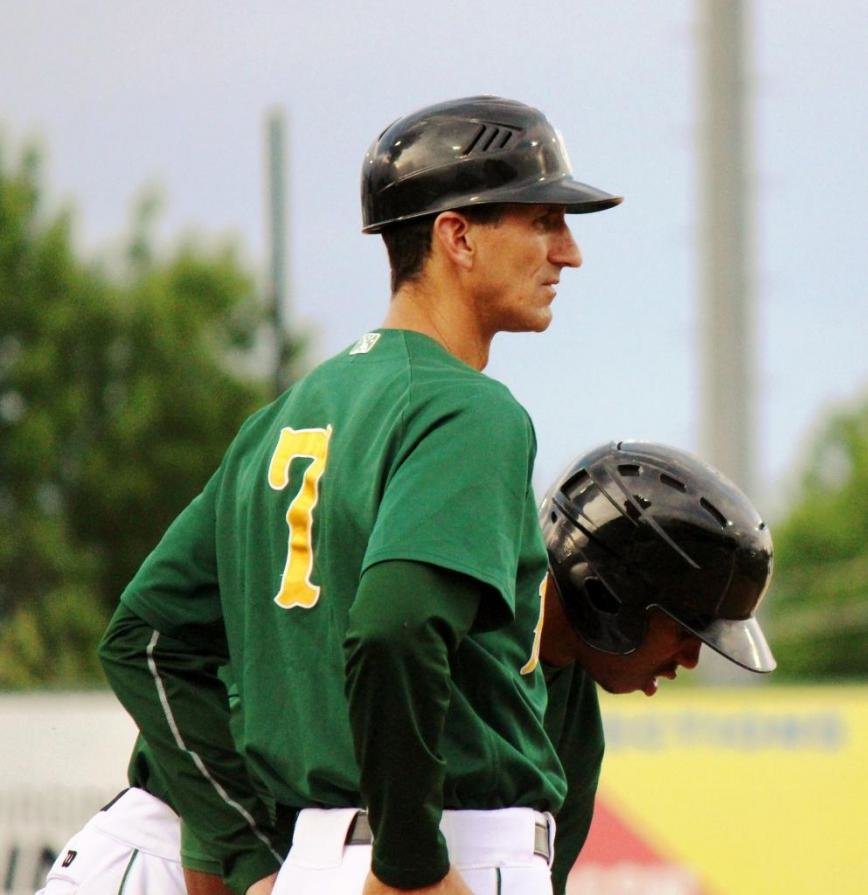 Mark Budzinksi spent most of his professional career in the minor leagues. He now coaches minor leaguers, with an emphasis on consistency.
Photo courtesy of Whitney Holmes/Lynchburg Wildcats 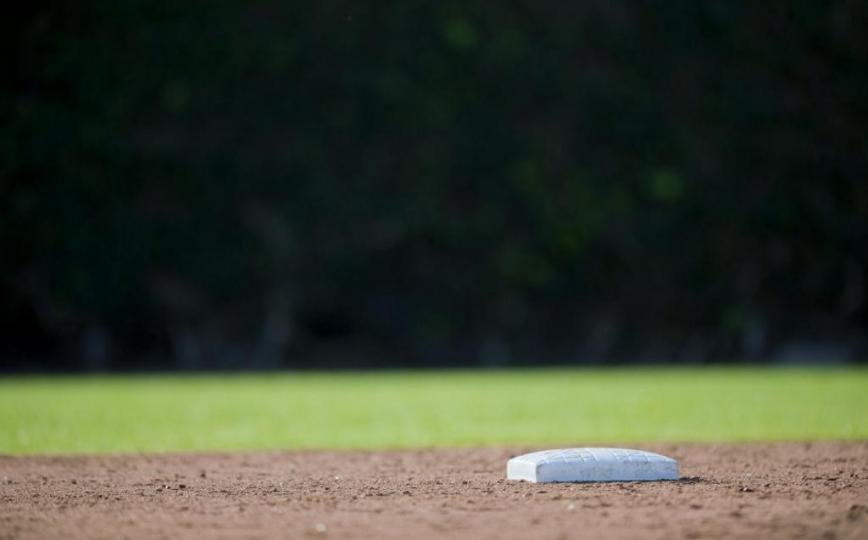 Mark Budzinski remembers watching his dad toss baseballs in the backyard grass so his son could replicate the difficulty of picking balls in the dirt. Coming up through the Green Hornets organization, Budzinski continued to work on fundamentals.

“Even in Green Hornets, in summer ball, we use to play 60 to 70 games,” said Budzinski, a former outfielder whose career reached a pinnacle with a trip to the major leagues with the Cincinnati Reds for four games in 2003. “If you play a lot of games, you better love it, you better enjoy it. It takes a lot of hard work.”

Matt Griswold ascended the Green Hornet ranks with friend Scott Neuberger, with both outfielders eventually getting a taste of the minor leagues.

“Green Hornets was such a great program compared to what we saw in some of the teams we played,” Griswold said. “Also, we were able to play together such a long time that we developed camaraderie, starting with Green Hornets and continuing through Severna Park Legion and Severna Park High School. Being on those teams from a young age, we became like family and we brought that to future teams. It wasn’t like that in the minor leagues.”

With the 2017 Green Hornets season starting April 8, some of those players reflected on their time in the program.

Banks fondly recalled his baseball youth, when he learned the game from Jim McCandless, both with Severna Park Legion and Severna Park High School.

“Throughout high school and then the minors and big leagues, I don’t think anybody taught the game better, whether it was cutoffs, baserunning, outfield or infield,” Banks said of McCandless.

“With Jim’s work ethic and Charlie Becker’s help — I can’t tell you how many hours of batting practice Jim threw me,” added Griswold. “He allowed us to maximize our skills.”

Those snapshots loom in Banks’ mind, along with his first major league start in 2007, when he got to pitch against the hometown Orioles as a member of the Toronto Blue Jays. Toronto lost the game, 8-5.

Griswold recalled hitting two home runs in one game for Severna Park High, but he also praised the Green Hornets family — those wearing uniforms and those in the stands.

“It was a lot of effort on behalf of the coaches, but we also had a lot of great volunteers,” Griswold said. “My parents used to run the concession stand at Kinder Farm Park. Looking back, you take it for granted when you’re young, but it means more when you’re old.”

According to Banks, Green Hornets now has 800 baseball players. Some of those athletes compete on the club team while others, seeking tougher competition, opt for travel opportunities.

“The 8, 9 and 10 select teams are really good,” he said, referring to three specific age groups. “The other leagues, it depends on the team.”

Presiding as commissioner over Green Hornets baseball for the last three years is Jeff Moore. Previously serving as a coach for the program, Moore said he is humbled to be commissioner.

“The teams are very successful at the upper levels. We don’t emphasize winning, we emphasize fun,” Moore said. “Once they show an interest in being more than a casual player, there are opportunities for those kids willing to put in the extra time and effort.”

Extra opportunities also exist for coaches eager to improve. Green Hornets holds coaching sessions and fall clinics with Dave Ferris, the JV coach at Severna Park High. Among the knowledge he shares is “knowing the rules of the game and knowing how to communicate,” according to Moore. Banks also noted that Green Hornets will “typically spend $150,000 to $200,000 every year combined for all fields, not just baseball,” just one way they help their players succeed.

Although they won’t take credit for their players’ development, the coaches have seen plenty of talent. Several Green Hornets and former Green Hornets are following a similar path to the one once taken by Banks, Budzinski, Griswold, the Neubergers, the Floyds and Teixeira.

As an example, he cited Tyler Blohm, “a tall, athletic lefty” who graduated from Archbishop Spalding High School in 2016. With a repertoire that includes a low 90s fastball, a changeup and a filthy curveball, Blohm pitched his way to a 9-0 senior season with Spalding, sporting a 0.74 ERA. Blohm was drafted by the Baltimore Orioles in the 17th round but decided to attend college as a member of the Maryland Terrapins.

Blohm said he doesn’t model his game after any pitcher, but he admires Los Angeles Dodgers ace Clayton Kershaw. “I want to have a curve just like him and dominate the game just how he does,” Blohm revealed. “Hitters fear him.”

Aiding the southpaw in that endeavor is his dad. “My dad was a coach for my whole Green Hornet life, and there are still a few drills that I do leading up to throwing in the game before I pitch,” Blohm said. “And it's not like these drills were young kid drills; they were drills he learned in the professional organizations he was with. So I felt like, even that early, I was on top of the game. But I do tell myself a few verbal things during the game, like if I fall behind 3-0, I can still hear Coach Dave Harding's voice yelling out ‘Ol' Reliable right here Ty,’ which was when we needed a strike.”

As the season gets underway for the next generation of Green Hornets, alumni shared their advice. “Really watch the professional players on TV and almost imitate what they do,” Griswold suggested. “Through that imitation, you can learn a lot. And have fun.”

Budzinski encouraged kids to savor baseball’s lessons beyond the diamond. “It teaches you a lot of life lessons,” he said. “You fail a lot in this game and things happen in life that don’t always go your way, and it’s about how you deal with that and how you keep pushing and driving and pursuing your goals and dreams the best you can.”

Moore also noted the importance of enjoying the game. “My advice to any kid, whether they are a special talent or someone who just enjoys it: have fun,” Moore said. “If you’re not having fun, you’re doing something wrong. Always be on the lookout to learn something new, and represent yourself and your team the best you can at all times.”

Then, with pride, Moore offered one more thought.

“It’s a small world,” he said, “and it’s amazing to me that in the Severna Park, Millersville area — although we do draw people from Severn and Pasadena and Glen Burnie — that we live in an area where there’s a heck of a lot of talent.”