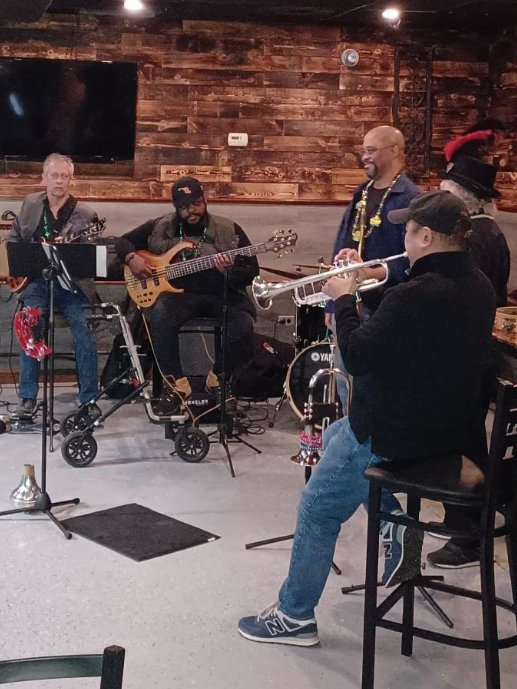 If you’re looking for a low-key evening of music in the Severna Park area, look no further than Copper Creek Pub & Ale House. Every Tuesday from 8:00pm to 11:00pm, local musicians put on a somewhat impromptu jazz jam. Guitarist Bill Freed along with Kwame Amponsem (bass), Bob Acton (piano) and Greg Reaves (drums) often serve as the jam session’s house band and support any outside musicians who wish to join in on the fun.

The jazz jam initially came together at The Corner Lounge in Upper Marlboro, which hosted the group once a week from 2015 to 2020. Even during the pandemic, the jazz jam managed to set up shop in the parking lot and continue to entertain audiences. When inquiring how the jam session changed locations, organizers Bill Freed and “Magic Ray” became aware of Copper Creek’s open mic night held on Thursdays and were inspired to ask if they could re-establish their weekly jazz jam at the new location.

What started as a small following grew into a substantial organization of talent. The jam on March 1, held at Copper Creek, seemed to be one of the largest turnouts the group has had to date. The night happened to be a Mardi Gras themed event that featured New Orleans inspired tunes, which somewhat deviated from the group’s more traditional jazz and swing numbers. From the smooth guitar riffs to the unmistakable wail of horns, listeners were immediately transported back to the golden jazz age of the 1920s and 1930s.

Trumpet player Gary Hendrickson who is known for his work with The Centuries and more recently, Gene Vincent and the Cadillac Cruisers, was a featured player in addition to New Orleans’ own Mike Weber on trombone. Other impressive saxophone and horn players from the local area were also featured performers.

What’s interesting about this lively group of musicians are their various musical backstories and how they came together as a group. For most of these musicians, a lot of their playing skills are self-taught, and one could say that’s one of the reasons the jam is such an exciting and uniquely collaborative experience. When listening to the group perform, audiences can see the fascinating dialogue that unfolds between musicians.

After discussing the appeal to the genre, Freed explained the freedoms that go hand in hand with jazz such as “the give and take of playing and the room that is created for experimentation.” The notion that each song is somewhat of an open-ended conversation, that the songs are often never played quite the same way, is another reason why one could argue their love and passion for jazz.

Most importantly however, for any newcomers or musicians interested in getting involved is the group’s safe and unassuming atmosphere. Anyone is welcome to sit in with the band and everyone is encouraged to express themselves creatively with solos. Don’t be deterred if you don’t play a “traditional” jazz instrument. At one point, a bluegrass fiddler was thrown into the mix, which made for an interesting and enjoyable experience.

More information on the jazz jam can be found by visiting the group’s Facebook page at www.facebook.com/coppercreekjazzjam.