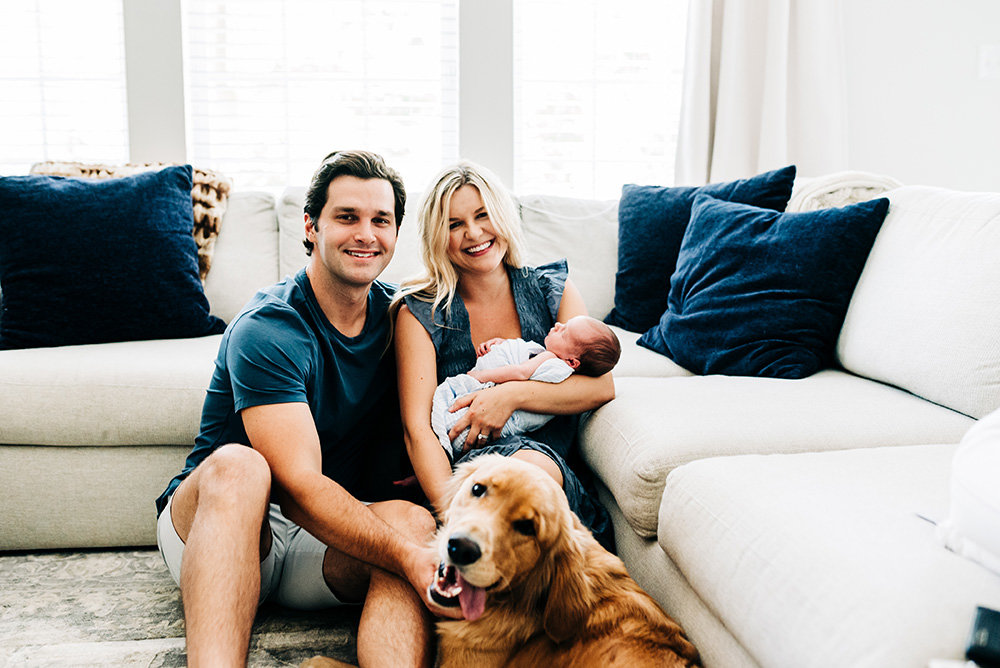 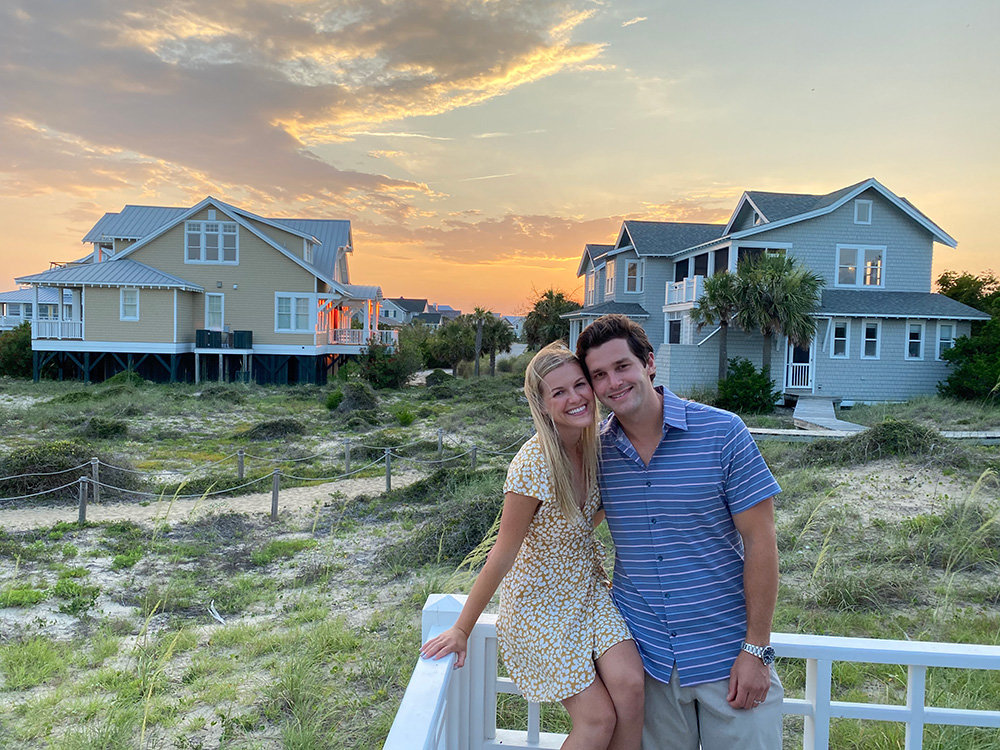 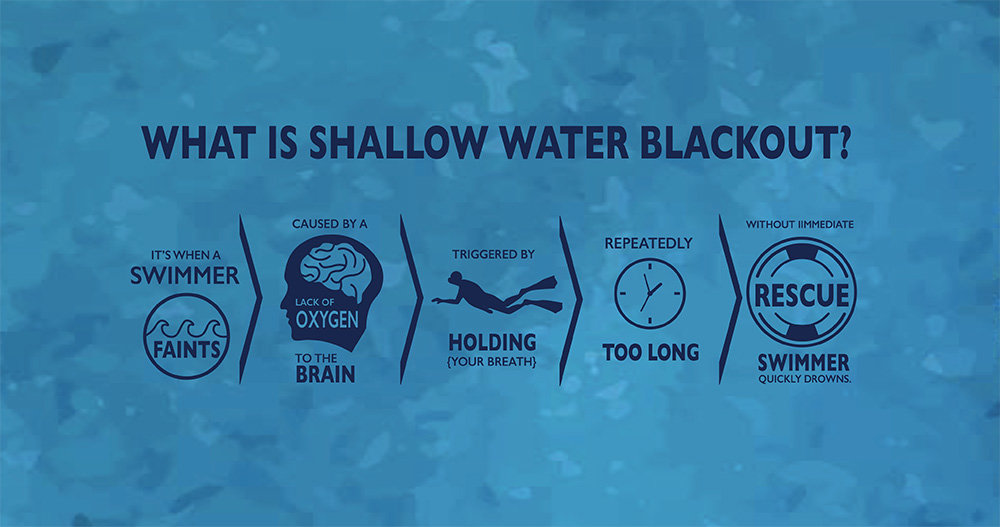 Shallow water blackout can affect anyone who is holding their breath underwater.
Graphics courtesy of Shallow Water Blackout Prevention 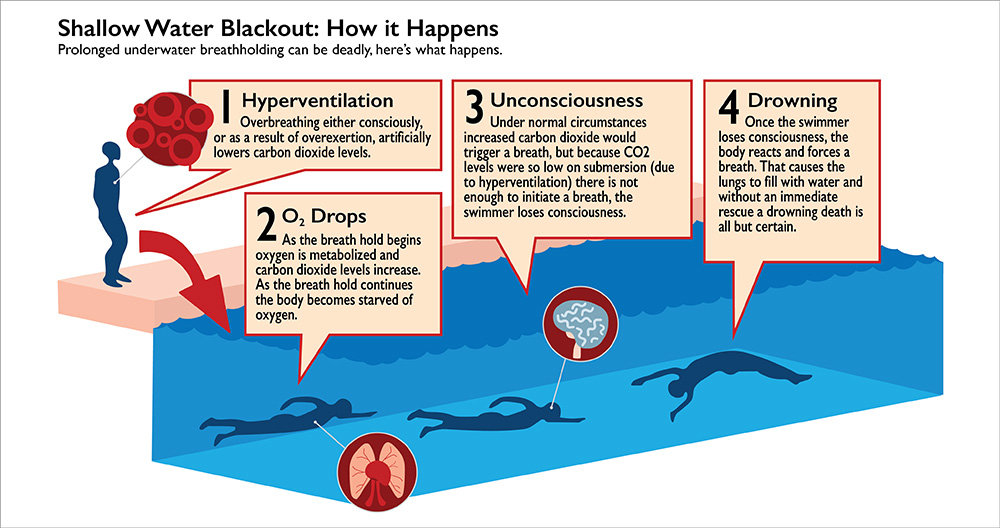 Shallow water blackout can affect anyone who is holding their breath underwater.
Graphic courtesy of Aquatics International, Nov/Dec 2011 Issue 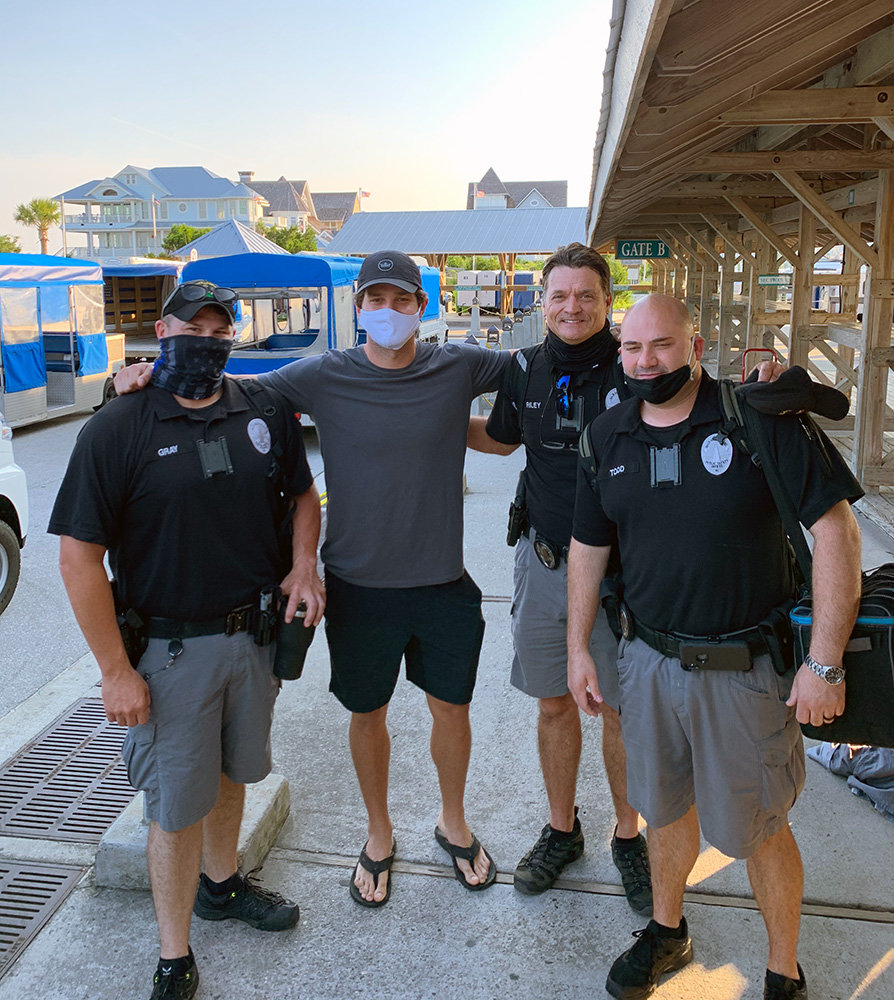 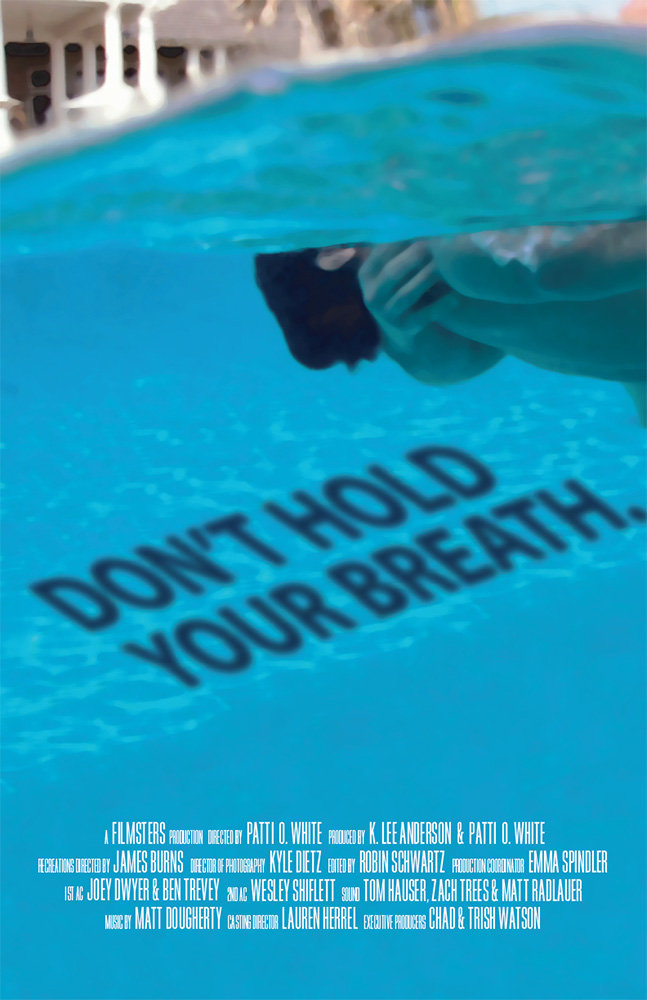 The short film “Don’t Hold Your Breath” is slated for release soon and is currently being screened at film festivals. The film centers around Chandler Watson’s shallow water blackout incident in 2020.
Photo courtesy of FILMSTERS 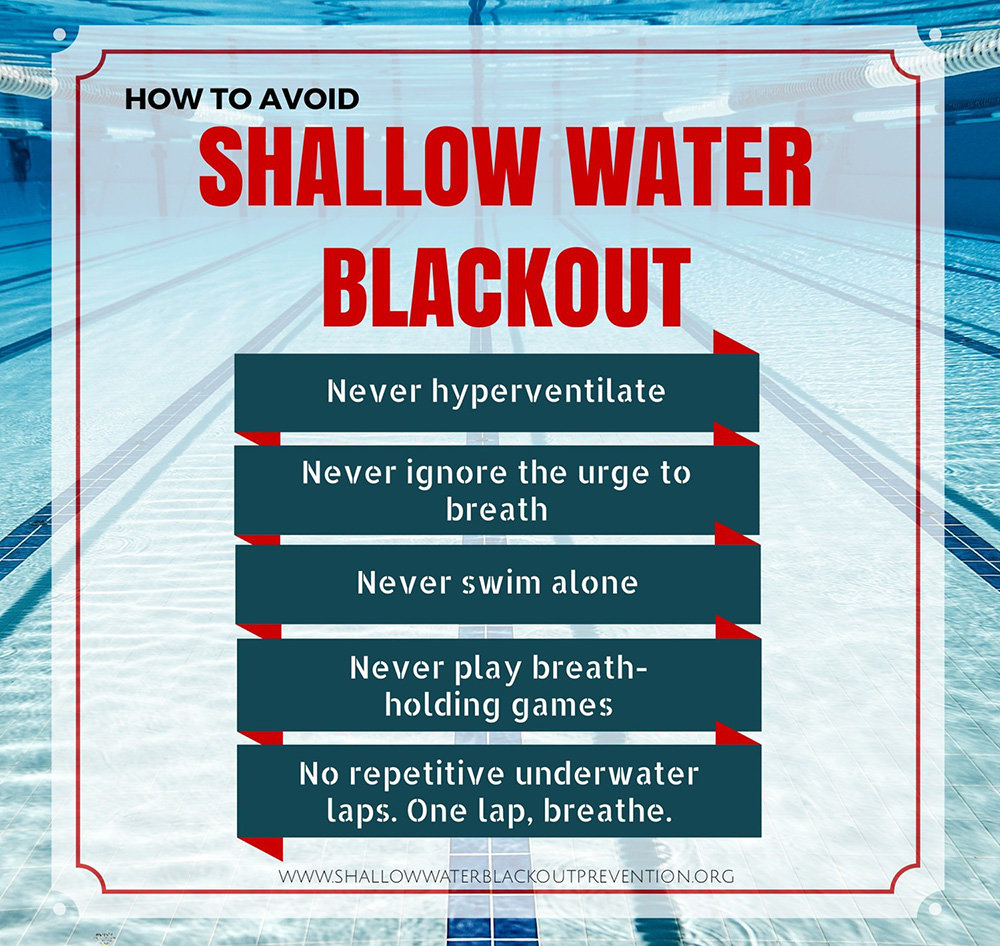 Chandler Watson had just celebrated his one-year wedding anniversary the weekend before his family traveled to Bald Head Island, North Carolina, for a vacation on Independence Day weekend in 2020.

It was a weekend that changed his life. But first it took it.

The Severna Park native and current Arnold resident has never been one to back away from a challenge. Whether it was growing up attending Annapolis Area Christian School or playing as a tight end for Indiana University’s football team, Chandler was used to being mentally and physically tested.

So when Chandler had the chance to showcase how far he could swim underwater while holding his breath in a pool at Bald Head Island, he didn’t hesitate. With family laughing and relaxing around the 25-yard pool surrounded by other vacationers, the challenge was thrown out for Chandler to go down and back with one breath.

“I had never done that,” Chandler said. “I think I’ve come close, so I decided today was the day.”

After hyperventilating intentionally in an aim to improve his cardiovascular performance, Chandler began his underwater journey. After making the turn, he began to venture back. He was just a foot away from touching the wall.

“That’s when the lights went out for me,” Chandler said.

It was a full five minutes before they came back on. Chandler suffered what is known as shallow water blackout, also known as hypoxic blackout.

“We all thought that he was still trying to hold his breath, maybe to show us how much longer he could,” said Chandler’s wife, Erin.

But Chandler’s mother, Trish, sensed something was very wrong. As his father, Chad, pulled his son’s lifeless body out of the pool, Trish Chandler’s maternal instinct proved to be all too real.

Chandler had no pulse or heartbeat for five minutes before a pair of doctors’ resuscitation efforts brought Chandler back to life.

“We knew, briefly, what it feels like to lose a child,” Trish Watson said.

Chandler’s parents, who still reside in Severna Park, note how fortunate they are that their son beat the odds. Shallow water blackout has a 94 percent fatality rate and the fact that Chandler had no lingering effects to his heart or brain from the incident is something doctors called a miracle. Given the fact that Bald Head Island is only accessible by a ferry, has no hospital on the island and the incident happened during the height of a pandemic where the pool was operating at reduced capacity and required signing up for specific time slots, Chandler is thankful that the pair of doctors happened to sign up for the same period as his family.

“EMTs got there right before he came to,” said Erin Watson, who now serves as the assistant director of the Shallow Water Blackout Prevention organization. “They were prepared for death. That’s what they thought.”

Medical helicopters that were en route from nearby Wilmington were called off once Chandler was revived.

“Without the lord and his hand on my life, there’s no way I’d be here,” Chandler said.

After taking a ferry back from the island, Chandler was checked out at a hospital and was advised that the next 24 hours would be critical. He stayed the night at a nearby hotel, but the next morning he was already back on the ferry to Bald Head Island and was swimming in the same pool that he died in.

Shallow water blackout is an underwater “faint” due to a lack of oxygen to the brain brought on by holding your breath for long periods of time, according to Shallow Water Blackout Prevention. Experts say that without immediate rescue, sufferers drown. It’s also indiscriminate as victims range from competitive swimmers and Navy SEALs to recreational swimmers and children.

As was evidenced with Chandler, shallow water blackout frequently occurs without any signs. Because of the detached mental state, victims can feel a sense of bliss as they think they can hold their breath longer. Shallow Water Blackout Prevention highlights that unlike regular drowning where it can take up to eight minutes for brain damage and death to occur, it takes less than three minutes for brain damage and then death with shallow water blackout because the brain has already been oxygen deprived coupled with warmer water, such as the water in many pools.

Shallow water blackout isn’t limited to just pools, though. Incidents can occur in any body of water.

Chandler said that his hyperventilating before his attempt to hold his breath underwater likely contributed to his shallow water blackout. Experts agree as they caution against hyperventilating, either intentionally or unintentionally. Shallow Water Blackout Prevention also cautions that swimmers should never ignore the need to breathe, never swim alone and never play breath-holding games.

According to the Michael Phelps Foundation, led by the most decorated Olympic champion of all time and his wife, Nicole, drowning is the third-leading cause of unintentional injury death worldwide and there are an estimated 320,000 drowning deaths annually, with more than half being children.

“I’m competitive and love to play games, especially in the pool, but I want everybody to know that some basic tips apply to us all – never swim alone and never hold your breath for an extended time,” said Phelps, a Baltimore native. “Shallow water blackout is lethal but also preventable, so please educate yourself and your loved ones about the importance of water safety.”

Chandler’s family teamed up with the Michael Phelps Foundation to release a public service announcement in August that aims to draw attention to the dangers of shallow water blackout. Additionally, a cinematic and hybrid documentary titled “Don’t Hold Your Breath” is currently premiering at select festivals and will be released soon.

“We just realized there was such an opportunity to bring awareness and educate to save lives,” said Chad Watson, noting that the partnership with Phelps changed the trajectory of their awareness campaign.

The Watson family stressed that they aren’t against holding your breath but cautioned that not practicing prolonged breath-holding and understanding what you’re doing in the water are keys to reducing preventable shallow water blackouts.

Trish Watson realizes that her son’s story is different than most shallow water blackout victims.

“For the families that have suffered loss to this, it’s so different for them,” she said. “We know that we’re coming from such a different perspective.”

Chad Watson also stressed the need for swimming facilities to have increased safety measures, such as signs at pools warning against holding your breath for prolonged periods and increased lifeguard and public training.

“Hopefully, years down the road if we’re able to have an impact and spread awareness, people will then be like, ‘Oh, you’re swimming, you’re at the pool … you don’t hold your breath,’” Erin Watson said.

Chandler currently serves as a territory sales manager for spinal implants, and his days are now spent surrounded by his family, including a baby, James.

“The name James means ‘may God protect,’ which we thought was pretty cool,” Chandler said.

Erin Watson pointed out a sobering thought regarding the couple’s baby.

“Had our outcome been different from Chandler’s experience, James wouldn’t be here,” she said.

Chandler’s life hasn’t been all smooth sailing since his shallow water blackout. Late last year, the couple was traveling in North Carolina when their vehicle rolled over several times at a high rate of speed. They walked away unscathed, including James, who Erin was pregnant with at the time of the accident. Emergency responders on the scene described the family walking away without injury with a familiar mantra in the Watson household. A miracle.

As if that’s not enough, months ago, Chandler fell through a glass cabinet and severed eight tendons in an artery, forcing a four-hour emergency arm surgery. Chandler said the injury was close to rendering his hand useless.

“Just miracle after miracle, really,” Chandler said. “For Erin and me, we’re thankful for the trials because this made us stronger.”

The PSA featuring Michael Phelps and Chandler Watson can be viewed here: youtu.be/u_Mb7uictG4.