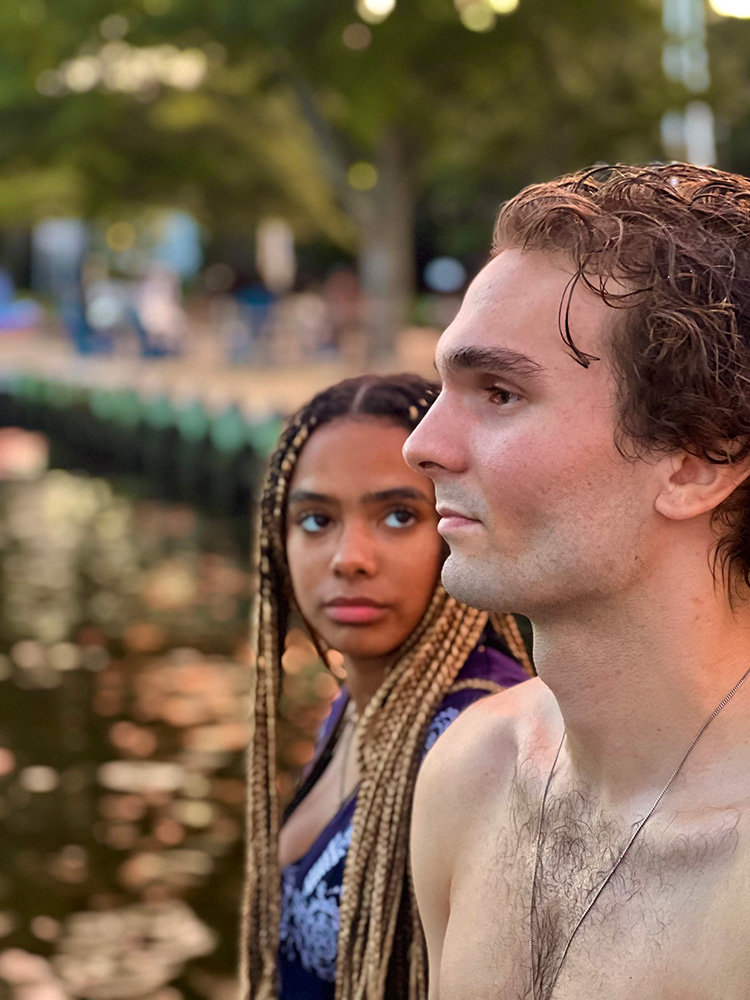 Sophia Greene (Jane) and Eli Stiewing (Chase) star in the film. The duo struggles through teen anxiety between an overbearing family and the possibility of new love.
Photo Provided
Posted Friday, October 7, 2022 12:08 pm
By Lauren Meyer

In a mere 14 days, the FILMSTER Academy’s advanced group created the short film “What I Love About Jane,” a subtly unsettling coming-of-age romance created by 11 students ages 16-18 and guest industry mentors who supervised them. The film was shot on location at the Cape Arthur community beach in Severna Park in one day, as well as at a private home in Millersville.

“As the FILMSTERS Academy advanced students were writing their film and I was working with them to understand the producing/writing process, many of their script scenes lent themselves to be filmed at a beach,” Pearce explained. “I offered my community’s beach of Cape Arthur if I could get our association’s approval. I was able to get the permission thanks to the Cape Arthur Community Association’s board lending its support to a student, non-commercial project.”

Hari Leigh, a FILMSTERS Academy supervising instructor since 2018, as well as a writer and producer for the industry, shared more about the setting with regards to writing.

“The setting came about when thinking about the concept of water and that it represented freedom to the protagonist,” Leigh said. “It turned out perfect for the needs of the script and photographed beautifully.”

Leigh also explained how the writing process at FILMSTERS Academy is an exercise in learning to write collaboratively.

“The students have to adapt to feedback from each other and their instructors just as a writer working professionally would,” Leigh said. “A normal script could take years to write; ours gets two days. So the students can't be too precious about their work.”

All students work with trained actors during production, and the advanced group has the unique opportunity to cast local actors, travel off campus for set locations and work with industry professionals from Los Angeles, New York and the Maryland/Washington, D.C. area during all stages of filmmaking.

Starring in the film is newcomer Sophia Greene, who plays Jane, and Eli Stiewing, a film camp acting team veteran, who plays Chase, Jane’s old middle school crush. The duo struggles through teen anxiety between an overbearing family and the possibility of new love.

FILMSTERS Academy co-founders Patti White and Lee Anderson — who are also co-founders of the Annapolis Film Festival (AFF), emphasized how students are different in a post-pandemic year of camp. This was the first time back in person since 2019, and it truly was a healing year with such a cathartic experience like filmmaking.

“They are carrying so many emotional scars from loneliness, isolation and anxiety,” White shared. “You could see it come out in their storytelling. They chose a story that took that on. Things represent the times, and this was a year that really represented the times.”

Celebrating its 20th anniversary, FILMSTERS Academy has given students of all levels the chance to work with professional equipment and get a real sense of an on-set experience, and the full process of making a film – from pitching an idea, to shooting, editing and post-production.

“The films improve year after year,” Anderson said. “These kids are getting equipment that people aren’t even getting at [University of Southern California] film school. They’re getting top-level film equipment that real films are made with.”

Leigh added, “FILMSTERS is a truly one-of-kind experience. The students are so lucky to be a part of … they can come out of this program with so much hands-on experience and creative expertise that is invaluable, no matter what career path they pursue.”

Musicians Donovan Malone, Abbey Clarey and Kai Droettboom were inspired to write and sing an original song for the “What I Love About Jane” and sang it themselves for the end of the film.

“What I Love About Jane” has been submitted to several upcoming film festivals with the hopes of screening in the spring festival season. To view the short film, which is shorter than 14 minutes, email filmsters@filmsters.com for Vimeo access.

“My Policeman” Gives Voice To People Who Are Famously Reserved