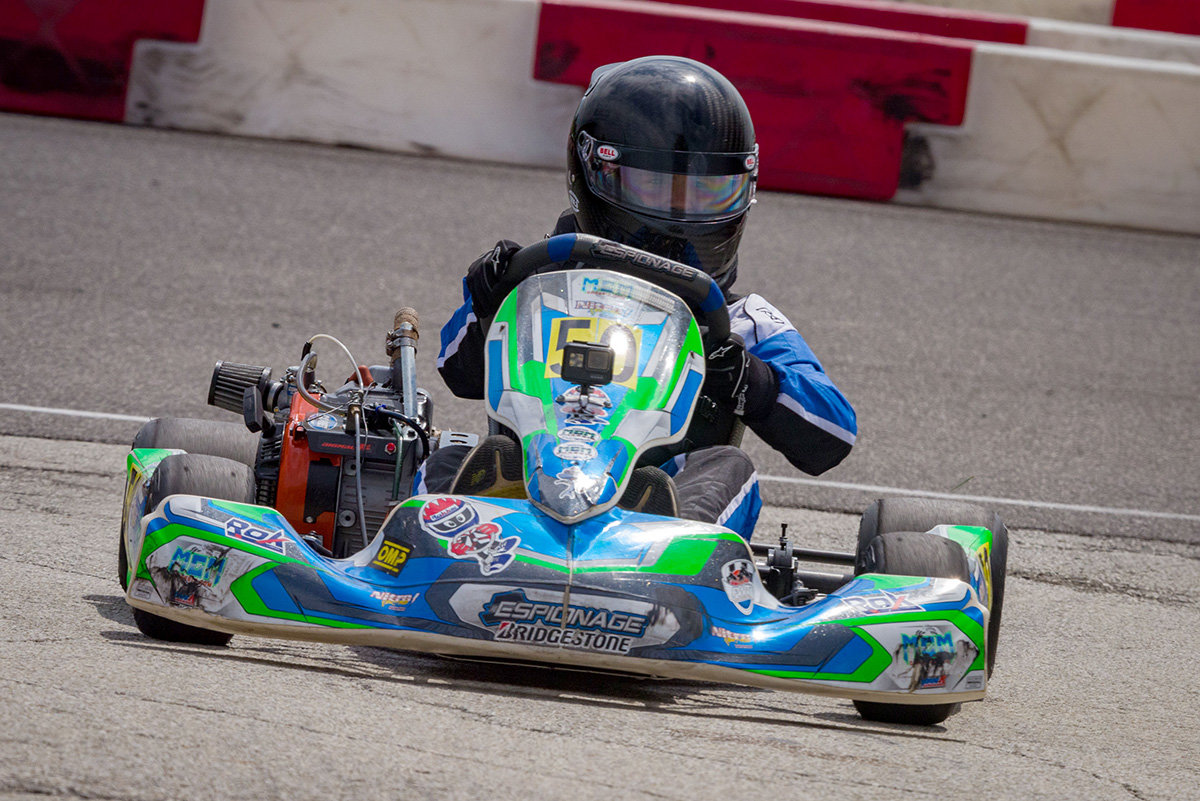 Brody Kelly has raced at Daytona, Charlotte and tracks in the Southeast and Midwest.
Posted Tuesday, October 6, 2020 3:41 pm
By Sharon Mager

Like most kids at ages 7-8, Arnold resident Brody Kelly had a good time playing local sports, but what really made his eyes light up was racing. After returning home from basketball, soccer or baseball, Brody would immediately turn on the television to watch NASCAR or another auto race.

Seeing his son's enthusiasm about the sport, Don Kelly, who owns Park Tavern in Severna Park, began doing some research in 2017 and discovered kart racing at Sandy Hook Speedway in Street, Maryland. The speedway had a race the following weekend, so Don and Brody drove north.

“The minute we pulled in, we were hooked,” Don said. “We weren't even out of the car when Brody was grabbing my arm and saying, 'This is so cool!'”

Don purchased a kart and a trailer for Brody in 2018, and they excitedly headed to Kannapolis, North Carolina, to take the delivery. The hobby took off from there, and so did Don and Brody, not only competing locally but around the country, racing 25 to 30 weekends a year.

They recently returned from New Castle, Indiana, and in early October were preparing to leave for a national cup race in Indianapolis. They've raced at Daytona, Charlotte and tracks in the Southeast and Midwest. The father and son team are enjoying the bonding, seeing the country together, and meeting others who love racing and "speak the same language," Don said.

Brody agrees that relationships are a big draw to the sport. “The people I meet, the friendships I’ve made are really good,” he said. “Mostly that’s my favorite part, but I also like going fast. The fastest speed I’ve gone is 63 this year at Indianapolis.”

Brody also likes the competition — both individually and as a team, and how contestants support and help one another.

Don, who acts as his son’s manager, pit crew, chief and counselor, said, “It’s a lifestyle. You get hooked very quickly.”

Brody, who attends St. John the Evangelist School, is now 13 and has taken the racing "full-on," said Don. When he's not at school or racing, he does race simulations on the computer.

Going from knowing nothing about racing to where they are now, Don is proud of his son. "Sometimes he didn't finish; the crew chief (me) didn't do something right, or he'd crash, but over the years, he's gotten much better."

Brody is starting to qualify and to win. "He's at the top of the leader pack, and he's having fun,” Don said. “That's all I can ask for."

Next year, they're planning to do a racing series that will take them to Wisconsin, Iowa, Texas and Michigan.

Brody's mom, Kerry, and his four sisters, 18-year-old Maeve, 16-year-old Maggie, 11-year-old Ainsley and 8-year-old Molly, are proud of Brody's accomplishments. When their schedules allow, the girls enjoy going to the track to cheer on Brody.

Don said Kerry has been supportive, providing transportation to the girls while Don is away, and filling in at Park Tavern.

“It's a family affair even if Brody and I are at the track," Don said. "Kerry and I are very fortunate to find this for Brody, and we've all been enjoying it.”